It would be awesome to see filenames (with full paths) for example after clicking on those summaries.
or even better - some “DETAILS” button, that would show complete list of SOURCE filenames with full paths.

Welcome to the forum @Artur2048

Although a button would be nicer, you can get a list of full source paths in a backup using list command either from Commandline in the web UI, or from your OS command line where sending it to file is simpler. The FIND command describes this. Basically, you use the wildcard * if you want all the pathnames listed.

Although a button would be nicer, The COMPARE command can show you the added / modified / deleted.

So there’s your added / modified / deleted. I don’t think Examined and Opened are logged directly, because backup records are on what was backed up, not what wasn’t. With no filtering, Examined seems like it will be close to the list of all files mentioned earlier. Opened is a check for changes. Goes Modified if it was…

compare command does become harder to use for something other than the two most recent backups, as you need to tell it what you want, and might need to read the restore dropdown to find the version numbers:

Above are available right now. Maybe they’ll help you some until a nice user inteface enhancement is done.

Thank you so much!
Compare command is exactly what i was looking for. please please please make it a nice button on backup summary

There is one issue however… if the list of files is long, it’s not displayed in full…
instead Duplicati would show just few first files from each section with comment “…and X more”.

is there any way to display the full list regardless of the size?

example of my output is as follows:

is there any way to display the full list regardless of the size?

Use this option to increase the amount of output generated as the result of the operation, including all filenames.

Thank you very much again.
“full-result” together with compare command works perfectly, and does exactly what i was looking for.

it would be really awesome to have for example “add/modified/deleted” sections expandable in backup summary. We have that logic already existing for WARNINGS (list of files that were not included in backup)

Just some “user friendly” way of accessing that kind of information 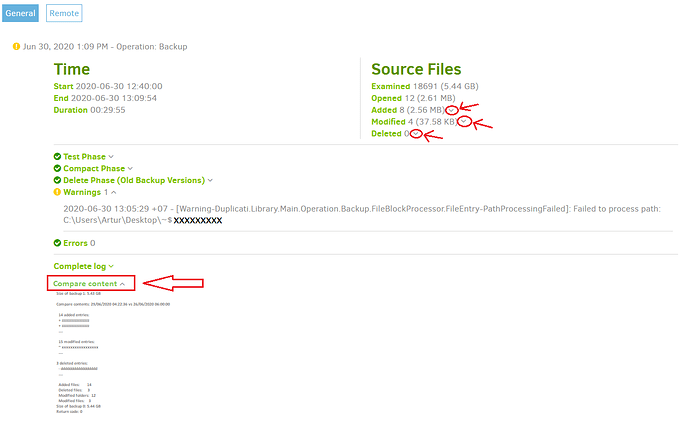 one more thing… is it also possible to get last backup status, the list of errors, and the list of warnings using command line interface?

i’m trying to get some kind of backup summary, that would show:

All of above except the list of files added/modified/deleted can be found on the Duplicati console in the log.

i’m just trying to have it in one place somehow.

one more thing… is it also possible to get last backup status, the list of errors, and the list of warnings using command line interface?

Using Duplicati from the Command Line doesn’t show such a thing that I can see, and neither does help.

Possibly some of this is due to the history. Command line came first, then web UI, which added features.
Raw info for warnings are in the per-job database, but errors are in the all-jobs database which GUI adds. You can see one unfortunate result of this in an early error case – backup logs view doesn’t have that log.

One good way to capture information, including some that’s nowhere else, is to use the reporting options. These can do things like send you email, or provide information via an HTTP web request to a web server.

Your own tools, or third-party tools such as Duplicati Monitoring or dupReport can build on the basic feeds. Both have support threads in this forum. They’re likely less backlogged on feature requests than Duplicati.

Thank you very much for all the answers and suggestions.

Duplicati is great solution. it’s currently in Beta version.
…i hope when it becomes stable-release user interface gets a bit more user friendly