Use empty space in Web-GUI

If you do have a lot of space on your screen (especially width), it would be nice if the interface would make use of this.
I specially refer to the “home”-view with the listing of all jobs. 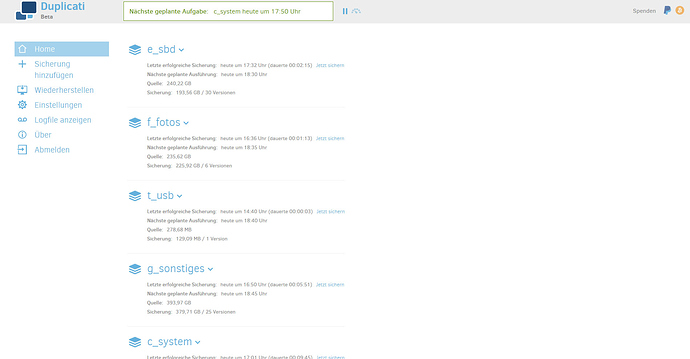 I think, it would be nice to make use of the screen width to minimze scrolling if you do have more jobs in this view. Perhaps a 2 or even 3 column view? Something like this: 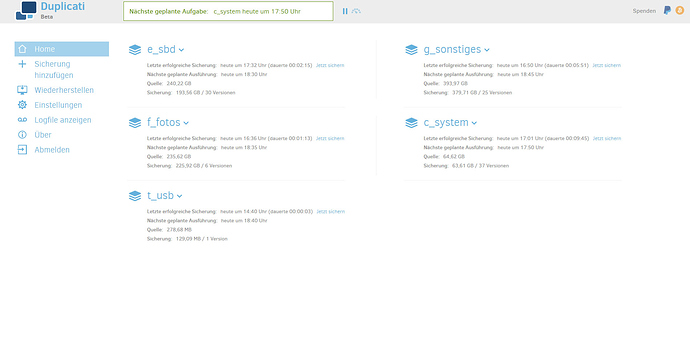 Perhaps it could dynamically switch between columns depending on screen width. Kinda responsive

I took a shot at implementing this. It’s easy with ngClassOdd/ngClassEven in AngularJS, but that only makes two columns. 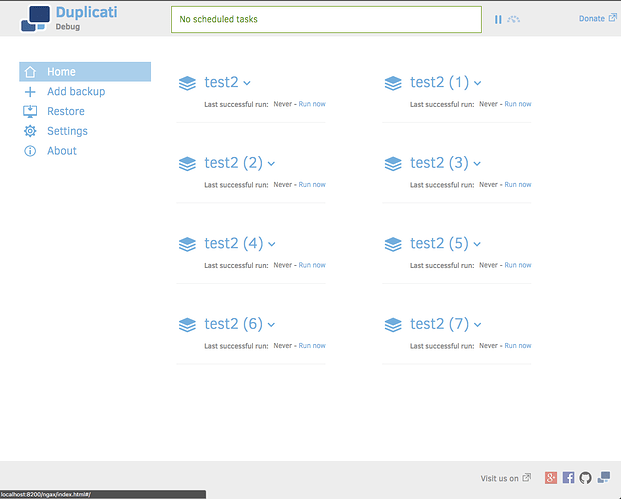 The mobile view is unchanged (css only applies to large screens): 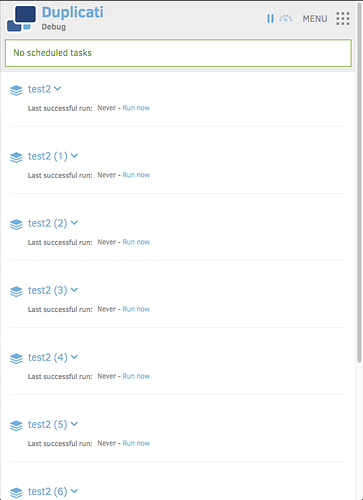 I’m with you on the 2 columns - this should be sufficient for most cases.
Kudos again

I would consider making it with a wide list area, and then use flow: left such that each div encapsulating the backup data will “float” to the next line, automatically making it adapt to any width.

But if you have it working for two columns with odd/even, we can do that and see if there are people with really wide screens :).

Here’s a version with the vertical separator bar as well, not sure if it’s better. 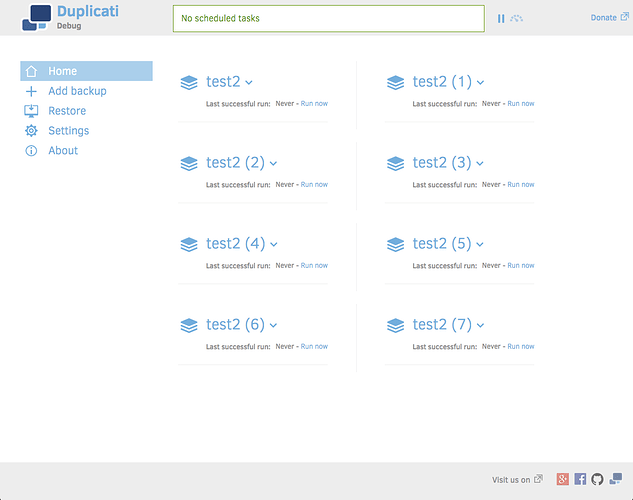 I prefer the one without vertical separators:

Simple is good. I’ll make a PR on the first version and then we can always revise later

I may have slightly forgotten to consider a mildly important use-case. Actually unfolding the job to get more info…
Looks “okay” on the left side 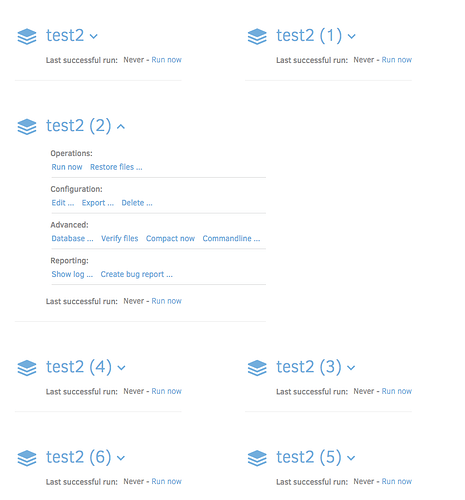 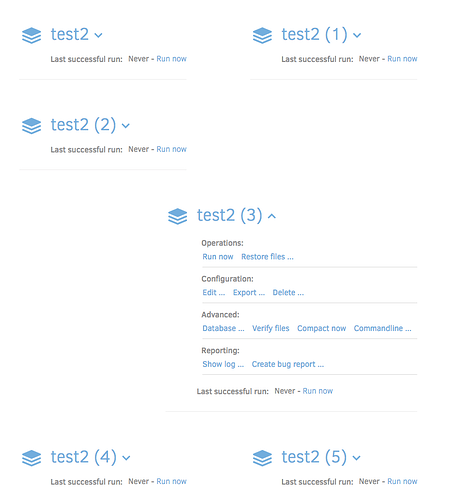 Aren’t those slideouts within the container/div of the job?
I also would go without the vertical sperator lines

It’s a bit strange. The foldout is wider than the div containing it and when I made it shorter to fit inside the parent div it changed spacing between the two columns.

I had to take a break last night, but I’m sure there is a solution, I just have to find it

I’m sure there is a solution

Or perhaps some abuse of zindex or just a plain old “modal” style window for job details (most of the links do a page reload anyway). Though that opens up annoyances with window centering etc. 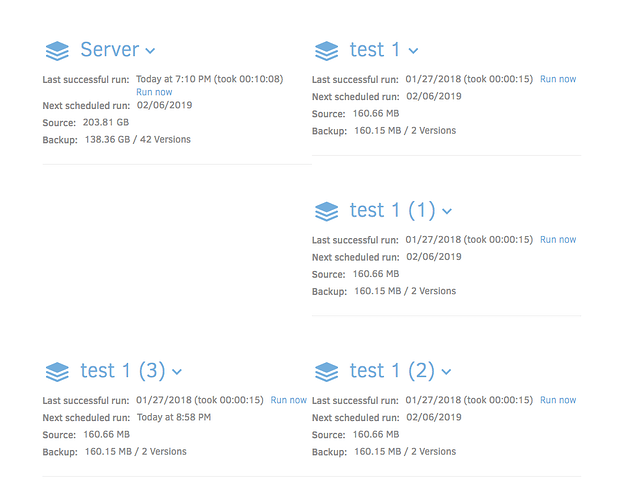 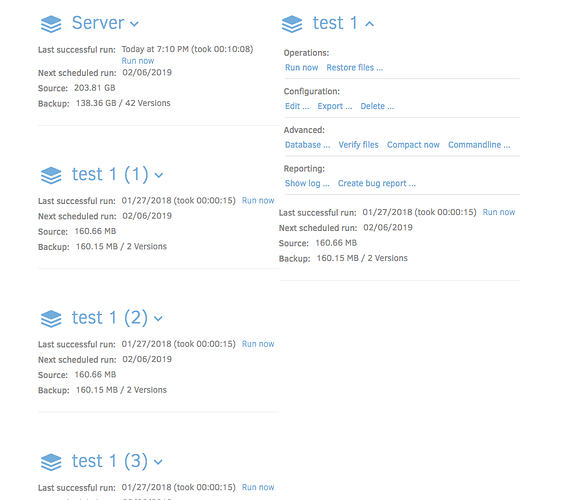 Well noticed. Backup job list should have a clean look, with or without any job unfolded. Thinking about it, I ask myself some questions:

Using drop down menus instead of expanding jobs can help with horizontally aligning of backup jobs. If jobs don’t expand by clicking on the name, it’s easier to force a preset number of lines for all backup jobs. An example how it can look can be found here:

A few things to consider: Adding icons assuming a short backup description doesn’t sound like a very good idea to me. Adding a set of icons to every backup job may ook messy. Which items are used frequently and which are not is quite subjective An icon in the main interface may cause starting unintended operations (clicking a Verify or Run now icon accidentally may cause an unwanted, time consuming operation). In the current web interface, a click on the backup name shows all options at once.…

This can cause a line wrap if the column doesn’t have enough horizontal space.

It should be noted I tweaked the max width of each unfolded column, making it shorter. I couldn’t make them wider because that won’t fit on the smallest full size screens (1250 pixels wide before table/mobile css kicks in).

What is the best order for the list of backup jobs? Fill column 1 with the first part and add the last backup jobs to column 2? Or distribute them horizontally, keeping the first jobs at the top of the screen?

I’m not sure. Currently it’s just listed left to right repeating on each row because that’s how it worked out with Even/Odd classes.

There is a feature request for (manually) reorder the list of backup jobs. Will using multiple columns prevent implementing this feature?

It might actually make it more complicated. Most list ordering tools I’ve seen for Javascript only work for single column/row lists.

What also really bothers me is that expanding a job can push some of the jobs in one column over to the other column while it’s open. Then the order is suddenly changes 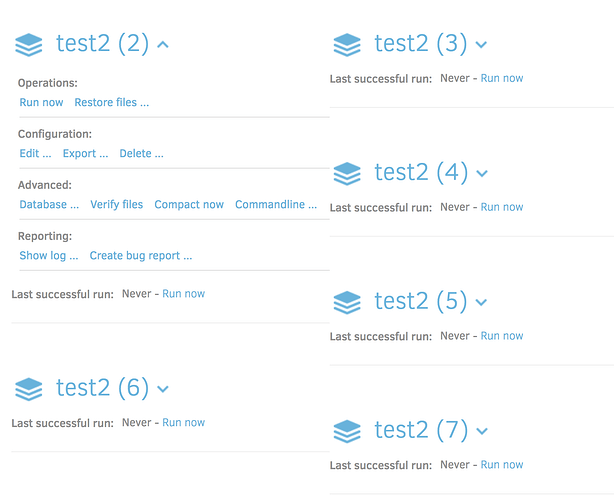 Using drop down menus instead of expanding jobs

Yes, I think that is exactly what flow does:
https://jsfiddle.net/xokmmjxg/

Try resizing the window so the boxes do not fit, and they flow down instead of left. You can force two-column by setting clear: both; on the odd items. By default it will allow “as many as possible”.

The flow should actually fix it, but the menu expand might look weird.

In between a big thumbs up from me for divin’ into this!

While we are at it, there are some ideas for an improved layout here:

It seems to me my backup names are generally much shorter than the width of the backup summary text. Would it make sens to include some “shortcut” icons to frequently used “sub-menu” items such as “Edit”, “Verify”, and “Show log” (and maybe move or duplicate “Run Now”, just for consistency? Of course I realize not everybody will have short names, so another thing to consider is all the vertical white-space below the icon the LEFT of the backup name - perhaps shortcut icons could go there… :sl…

That’s the topic I linked to 5 posts before this one!