I think bouth shoud be not correct!
Very funny in combination with software inventory tools

, but ofcourse, its only a number, not a function

Hello, did you try ctrl + F5 ? Web interface is often cached in browser.

While @mr-flibble is correct that this might be a browser caching issue, it sounds like in your case it’s more likely related to how Duplicati handles GUI based updates. Check out the “How Duplicati installs/updates work” block of the first post here for more details, but I’ve also included a summary below for your particular case.

On Windows an INSTALL (like from a .exe or .msi file) goes into your C:\Program Files\Duplicati folder as your “base version” and is what “Windows Apps & Features” will report as your app version. When the “base version” is run, it first checks an updates folder to see if there are any newer versions in there and, if so, passes control off to the newer version.

New versions get into the updates folder when they are installed via the Duplicati GUI. Since they weren’t actually “installed” (in the Windows sense) and aren’t in the C:\Program Files\Duplicati folder Windows doesn’t know that they’re there so just reports the “base version” number.

This also means that when you uninstall Duplicati what you’re really doing is removing the “base version”, but if you don’t remove the newer versions from the updates folder, then when the freshly installed “base version” (in your case 2.0.2.18) is run it detects the 2.0.3.6 update left over from the previous install and passes control to it. Basically, the uninstall process isn’t clearing EVERYTHING from the system.
[/details]

With all that being said, I don’t know why your Windows Apps & Features is showing 2.0.0.7 but if it makes you feel any better, so is mine.

I suspect there is a bit of a version reporting problem associated with Windows Apps & Features but a sample size of 2 is a bit small for declaring it a bug. If we can get some testing / confirmation from some other Windows users about what version shows in their Applications lists that would be great. (If you’re not on Windows 10, please say so.)

Oh, does the install date for your 2.0.0.7 match with your original install (mine does) or the re-install? 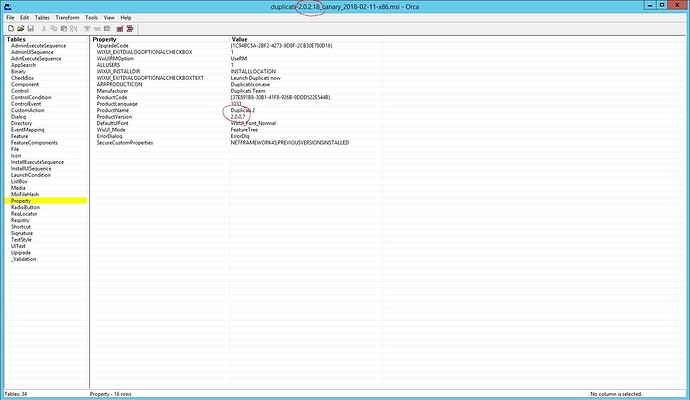 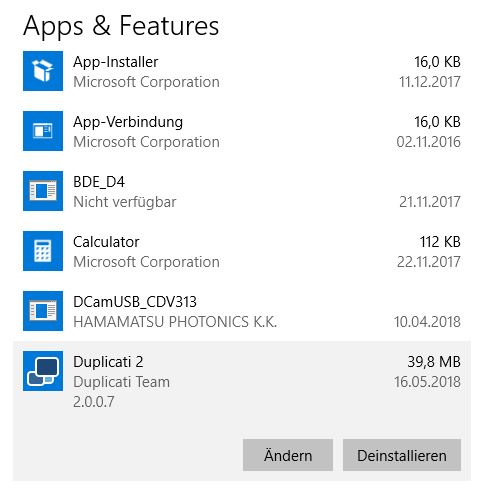 Second … thank you to mr-flibble. Ctr + F5 was not the problem, but the deinstallation process doesnt remove the updates in ProgamData folder, this is… untypical for a program deinatallation. After correct following the downgrade instructions (thank you…) and manual deleting the update folder it works correct.

Downgrade was only part of a test environment to evaluate central rollout and software inventory of Duplicati. There was no functional reason.

I assume the version stated as “2.0.0.7” has to do with the ProductVersion string defined in the Windows installer, as discussed here: https://forum.duplicati.com/t/software-deployment-configuration/3447.

I don’t have a lot of experience with forums, so I simply hope that I posted the link to the other topic correctly.

If you look at the individual files, you will see that they have the correct version. Only the MSI is reporting the wrong version number.

Just for reference, here’s a post about the MSI version number.

I am not well versed in MSI generation; I just made the installer on a “least-effort” basis. The code that generates the MSI files is here: duplicati/Installer/Windows at master · duplicati/duplicati · GitHub The build-msi.bat file is invoking the build process, and I guess it needs to also change this line: No, there is no such document. I have not used ORCA or other enterprise install tools. I assume you mean the ability to install updates automatically (you will roll out updates c…

I’ll try to update this after my next reboot.