Show which file is currently backuped in the GUI

I agree with @Pectojin whom I think is saying that “as long as you work within the current UI limitations, it should be fine”.

This would be cool

Especially because the path may be too long for the top bar, then if it is and you need more than the last 20-40 characters of the path then you can see it by expanding the job details.

Yes, this could be confusing for users who don’t know exactly how the mechanism works. Some other thoughts:

As far as I know it’s a planned feature.

It’s the wild west, I think almost any feature is technically a planned feature. It’s just about getting there

I’m wondering what we’d have to do to get some UI/UX folk hooked and contributing their skills. I don’t dislike the current UI, but I have this vague feeling that we could improve it a lot with some smaller changes to it.

Edit: I should add. I do think we should be careful about not bloating the UI with too much information in the wrong places, but it’s always that balance

we should be careful about not bloating the UI with too much information in the wrong places, but it’s always that balance

It sounds from @kees-z like there is an overall design esthetic to be attempted, which is great!

And while I do like some of the designs presented in the “detailed status window” linked topic from above, I again say I’d rather see the feature in a “Current file” line of the job menu sooner than as part of a full-fledged status window later…

It kind of sounded like the “Current file” wrapable line was being favored, so assuming we haven’t scared @dbddhkpde off yet I’d say go for that!

It should be that much easier to move the info to the more full featured status window when comes along down the line.

(Side benefit - as its own line it might be possible to include more detail like whether the file is being “scanned for changes” vs. flat out being “backed up”.)

Thanks for all the comments. I agree, that the progress bar should be kept clean!
I will than go for the backup job summary adding the current activity: backing up, processing file, uploading… all the states that the last page event comes up with.

How about this one (screenshot):

If the file processing is done the current action info will hide again. Only the progress bar will indicate what’s going on until it finishes…

Bad thing about this:

I did the “small” progress bar with inline html/css. Need to figure out how to integrate this into the correct places. AND some translation tags need to be created too…

Any chance that this could be combined with changing the icons for running and queued backups?

I gave it a try and created some custom icons in 2 varieties: black and green. The green color is already used in the UI, but the small symbols are harder to identify than the black ones. You can download the icons here.

Ahhh, the joys of scope creep.

Tried to get things done

.
I will try to make a pull request today to upload my modifications.
The features so far:

And a screenshot too: 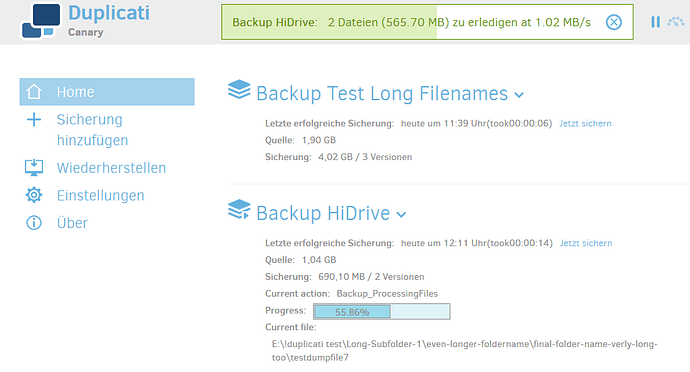 Some cosmetic / html modification is required (help needed…) but I think maybe we can start with this one?..

I saw your icons for scheduled jobs, but it’s not implemented yet. My requirements focused on the current file, its progress AND the full path.

The possible moving up/down with long paths with this implementation is an issue! Maybe some toggle option / limitation? Not sure what is best and I am not that familiar with CSS/HTML to get this done…

Progress bar color: the jobs details are all gray text and light blue links, headline is light blue too. A light green progress bar looks more clean? Not sure about that! I will give it a try

Progress bar color: the jobs details are all gray text and light blue links, headline is light blue too. A light green progress bar looks more clean? Not sure about that! I will give it a try

I guess I was not clear about that. What I tried to point out is that in your screenshot there is a rectangle inside a rectangle in the small progress bar. This is different from the main progress bar at the top of the screen, there is just one rectangle that fills up from left to right. For me, the blue color is ok.

Pull Request is on its way…

Looking good on my machine

I would consider making the progress % always centered, since right now it moves inside the progress bar, although that might just be preference.

Also, the current file line seems to stay on the same like as Current file: when it’s short enough, but otherwise jump to a new line. It may make sense to force it to always appear on the new line to avoid it jumping back and forth 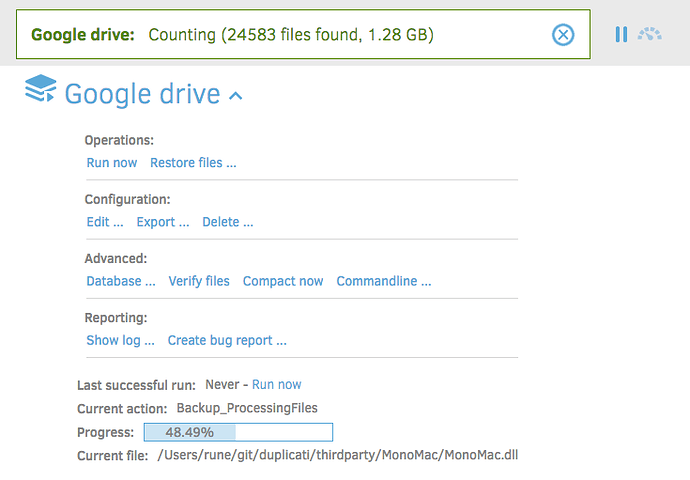 Overall, I really like how it’s turned out. It really adds transparency to the backup process and the run/pause icon is icing on the cake

Pull Request is on its way…

That’s right - you just ignore mean old @kees-z’s scope creep requests and get that AWESOME work of yours out the door!

Of course those suggestions are actually pretty good so as soon as that PR gets to the trunk we can swing back around and start fine tuning.

And I’ll add some more of my own suggestions which you probably already know, but just in case… when tweaking UI (like the “Current file” display wrapping vs. internal “…” elipses) consider how it will look on a mobile device (so resize your test browser window down to a mobile width) as well as what might happen with long worded languages (which I suspect you’ve already considered).

Congrats on the code getting merged in, I just saw

When you decide to pick up the figurative pen again I can recommend reading up on branches to make it easier to work on multiple changes and keep the change history clean.
Create a new branch with git and manage branches · Kunena/Kunena-Forum Wiki · GitHub

Additionally, it can be very useful to reset the master branch to the current state of the Duplicati master before making a new branch. That way it’s easier to merge new changes.

How do I reset the git master branch to the upstream branch in a forked repository?

It was a mess figuring out how to fork on GitHub, clone, pull, merge, SSL-keygen… finally i merged my small modifications over the web-ui

but don’t tell anybody…

Wanted to use Git Extensions (used it before at work) but got many error messages due to … well, I don’t know exactly, but will keep on trying

.
The branch feature was something I was looking at too. Will check your stackoverflow-link and become a tiny little bit more experienced to keep on contributing.

Should I close this issue / topic or mark as done / solved here in any way?

Using git gets easier with time, but I still use the web-ui for merge requests

The branch feature was something I was looking at too. Will check your stackoverflow-link and become a tiny little bit more experienced to keep on contributing.

Branches are wicked cool and useful once you get used to them, but there may be better articles than what I linked. It was just the first I could find that seemed to describe the process in practice