I’m loving @dbddhkpde’s new job icons (Show which file is currently backuped in the GUI) and it got me wondering how difficult it would be to provide last-run (aka ParsedResult) status for a job.

I’m picturing something like the following (not sure how well they translate to other languages):

Good idea, will check how to get a hold on the info “ParsedResult”. On the desktop version a tooltip / mouseover-effect might come in handy to show if it is success, warning or failure. Not sure about mobile.
If I remember it correctly @kees-z said something about showing the order of the jobs (number) in which they will be processed. Don’t know…

More icons? How about these ones…

To react on the ParsedResult of a Backup-Job, I extended the Backup Metadata array by an element called “LastParsedResult” to store the outcome of the jobs last action. As the Backup-Job with its Metadata is stored in the database it can be reloaded / reset the next time Duplicati starts/runs.

The GUI now takes care of this “LastParsedResult”. If the result is unknown or the job has never run before, the normal known symbols will be used:

for scheduled jobs and

In case of success these two icons will show up:

The same for warning and error/fatal:

The first idea was not to work with additional “full” icons, but to use an overlay for the existing icons. That would have reduced the number of icons, but I just did not get it right. BUT

additional 25 KBs might by OK anyway and the Angular expression is just a little longer which adds something too.
Side effect: If the Metadata of the Backup-Job contains the item “LastParsedResult” the normal icons without any exclamation mark or OK-sign will only be shown for new Backup-Jobs which never run before…
That would be OK for me! 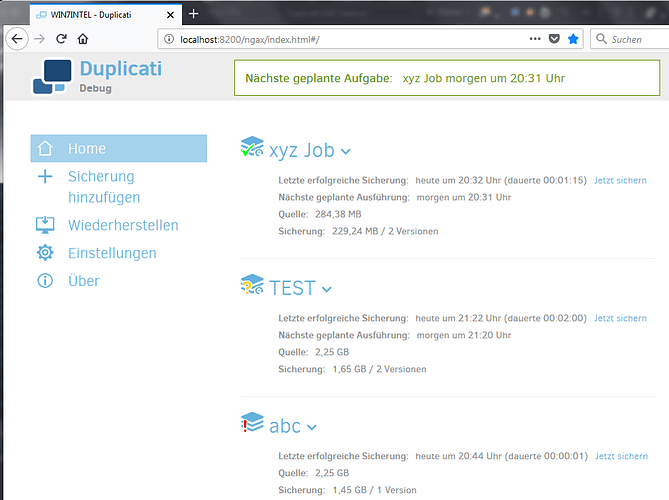 It’s too bad the overlay idea didn’t work out, but I doubt the performance hit of multiple icons will be noticed by most users.

And as much as I like the color coding (as shown in my original post), I now have to wonder:

Are green, yellow, and red “standard” enough colors to make sense for all our target users?

I think the combination of colors with shapes makes good sense. If you are colorblind for instance, you can still make out the shape, and others get double-info.

Does @kenkendk have any opinion about adding colors to the current themes?

Not really. I think the current theme tries to keep the number of colors down, but here we are expressing a state. It works equally well with light and dark theme, which are the only themes we have right now.

I had another thought - do these icons include tooltips to explain what they mean? For example, I like your addition of the clock for scheduled jobs, but I didn’t really know that’s what it was until you described it.

(There don’t seem to be any tooltips for those icons right now.)

I understand the need to see the status of backup runs. But this is something that we have now already. The screenshots shows: “Letzte erfolgreiche Sicherung (last successful backup run)”. We should not show the same kind of information in different places. Instead we should make sure that the status below the backup provides all information that users need. If there is some critical information (like “backup finished with errors”) we can add a coloured icon to the text to grab the users’ attention.

Furthermore, I see backup jobs as static entities. The job itself does not change by itself over time. The status is actually related to the last run of a backup which again was part of a queue and should have created a notification. With this in mind I have sketched a suggestion how to get all those things a little bit more sorted out while maintaining a clean and simple-to-use UI.

You can see my suggestion in Suggestion to improve queue and notifications I would like to get more feedback on it. Maybe we have to make sure that users do not miss important messages like backups runs that failed!?