What should i do?

Welcome to the forum @Adramelramalech

I’m not finding that text in Duplicati (or its web server) source, in the forum, or in GitHub Issues.
Can you describe error appearance further, or preferably paste a screenshot of it into this topic.

For general info, what operating system is this, and what sort of destination is backup going to?

What should i do?

Above, plus say what you tried, if anything. For example, did you restart Duplicati or the system?

I apologize but that is all I have is server locked error message. It worked for months now it will not run at all. I restarted the service, edit the backup job. Nothing works.

I apologize but that is all I have is server locked error message.

The message is still happening, but you can’t describe it or screenshot it and paste to the forum?

For general info, what operating system is this, and what sort of destination is backup going to?

What about this info?

Win10 is what duplicati is installed on
it is using webdav
the designation is my nextcloud
in nextcloud the designation drive is an mounted NAS share
I guess I may have to drive over there and take a pic.
Thanks.

??? Isn’t Duplicati on the screen near you, either in your web browser or some sort of command line?

If you’re using from Windows, see 7 ways you can take screenshots in Windows 10 and Windows 11

Nope. A few towns over.

A few towns over.

Ouch. So you’re just reporting from memory and have no remote access? This may get awkward.

Sounded like you had a view of something (maybe there at the time?). Was it a GUI popup over the standard Duplicati screen? If so, was it blue and in the middle or red and near the bottom? Was it a Windows notification which sometimes says the same thing? Was it a web page with just that text?

I restarted the service

Meaning you installed as a Windows service using Duplicati.WindowsService.exe after initial install?
You then used the Windows service tools to restart the service? You could also try a system reboot. 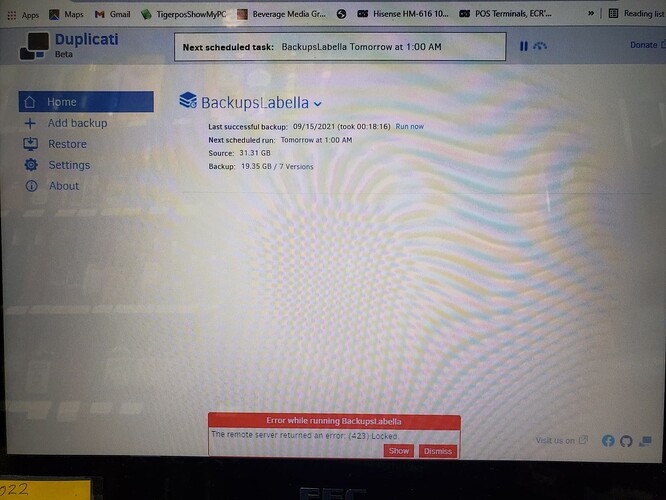 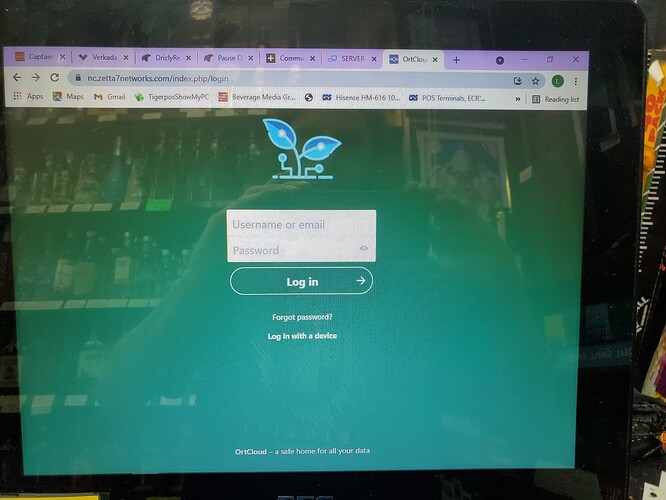 Errors reported by Duplicati which refer to the “remote server” mean the destination server, here the Nextcloud server, which uses WebDAV, which is an extension of HTTP. 423 looks WebDAV-specific:

and because I’m not familiar with WebDAV, I won’t try to interpret that. From Duplicati end, you can (if you have accesss…) About → Show log → Live → Retry to see what was being tried when 423 was returned.

A backup will usually begin with list, then do a series of put for uploads, then list and get verifications. Alternatively you can try the Verify files choice which is probably just the list and probably three get.

There seem to be some Internet search results for Nextcloud 423 locked problems. You can look at some.

That really does not help me. I delete the job, make a new one and it works. And no one has a fix or any idea. I am too accept that? We can develop duplicati and nextcloud and webdav but a solution, an idea or anything we are to just ignore?

I must not understand this term locked. What does locked mean? I can still access the server, and everything works. It is a problem between duplicati and the server but the user can use it all day no problem. I dont get it

And by the way, three machines are now getting the same error.

I’m taking a guess here, but maybe it fails when Duplicati decides to delete files on the remote side. Are you disallowing deletions by chance?

And I am taking a guess here no one really cares at all.
I have no idea what I am supposed to do here. Literally. So Duplicati that once was I can no longer use so everything I made was all for nothing.
What am I missing here? Seriously? How are you all using duplicati?

Not sure why you are saying that, we are trying to help you. Duplicati is designed to work with myriad back end products, and it has no control over limitations placed intentionally on the back end (like prohibiting deletions), or unintentionally, or compatibility issues on the back end.

The problem is I have no idea what to do. And once again I am in another stituation where tens of thousands of people can use duplicati and I am the only one that can not use it. Every one just passes the blame. It does not matter anything.Community. Here. I need assistance. I get none.

I am getting the same thing on next cloud, no support and the blame is being passed

I just need to walk away from this and find another solution. Only thing i can do and there is no other solution so it sucks.

Now i get this

Does duplicati even work?