Alright, I will look into the truncating of the title option. I think it will have to be done with JS since the content on the status is dynamic and is continuously changing.

Alright, I have implemented the changes needed to truncate the name and fit the full status. I have also added a title attribute to the name, so if the user hovers over it, the can see the full name in a tooltip

I hope it is to your liking…

The title attribute is a nice touch.

It should collapse to the size of the title but expand as far as possible when the title is long.

Which browser are you using?

Chrome 65 on MacOS. I tried recompilling the css and clearing my cache, but it seems consistent.

Also, I just tested on Safari and Firefox:

Interesting. I will look into it. I do not have a Mac, so debugging is a bit challenging on that platform. Interesting that there are OS related implications that affect both browsers.

I think it’s the flex: 1 attribute in the task-name class. duplicati/style.less at master · duplicati/duplicati · GitHub

When I remove that line it works as intended for me.

Okay, I will look into it further. I used flex as a fix, so it occurs on the client side without the need for JS, but I will see what I can do. I checked for compatibility before I used it, but it may be conflicting with something else.

Very odd. I can confirm it’s both on firefox and chrome that disabling flex helps.

Curiously it doesn’t seem to matter if I’m on a 2560x1600 screen or a regular 1920x1080 screen, so it would have to be entirely a problem with their implementations on the operating system.

Not that it’s a huge deal, but with Firefox (Windows 10) I noticed the same “: Counting…” right justification that Pectiojin provided a screen shot of earlier.

Interesting. Ill see if I can figure it out. Just wish I can get it to reproduce on my system. I did test with WIN10 and firefox/chrome and IE.

I was finally able to replicate the issue and @Pectojin was correct. I pushed the fix.

I was sure I wasn’t crazy

I was sure I wasn’t crazy

Isn’t that exactly what a crazy person would say?

Maybe. One of my colleagues were always quick to point out that it only proves I wasn’t crazy in this case, not in general 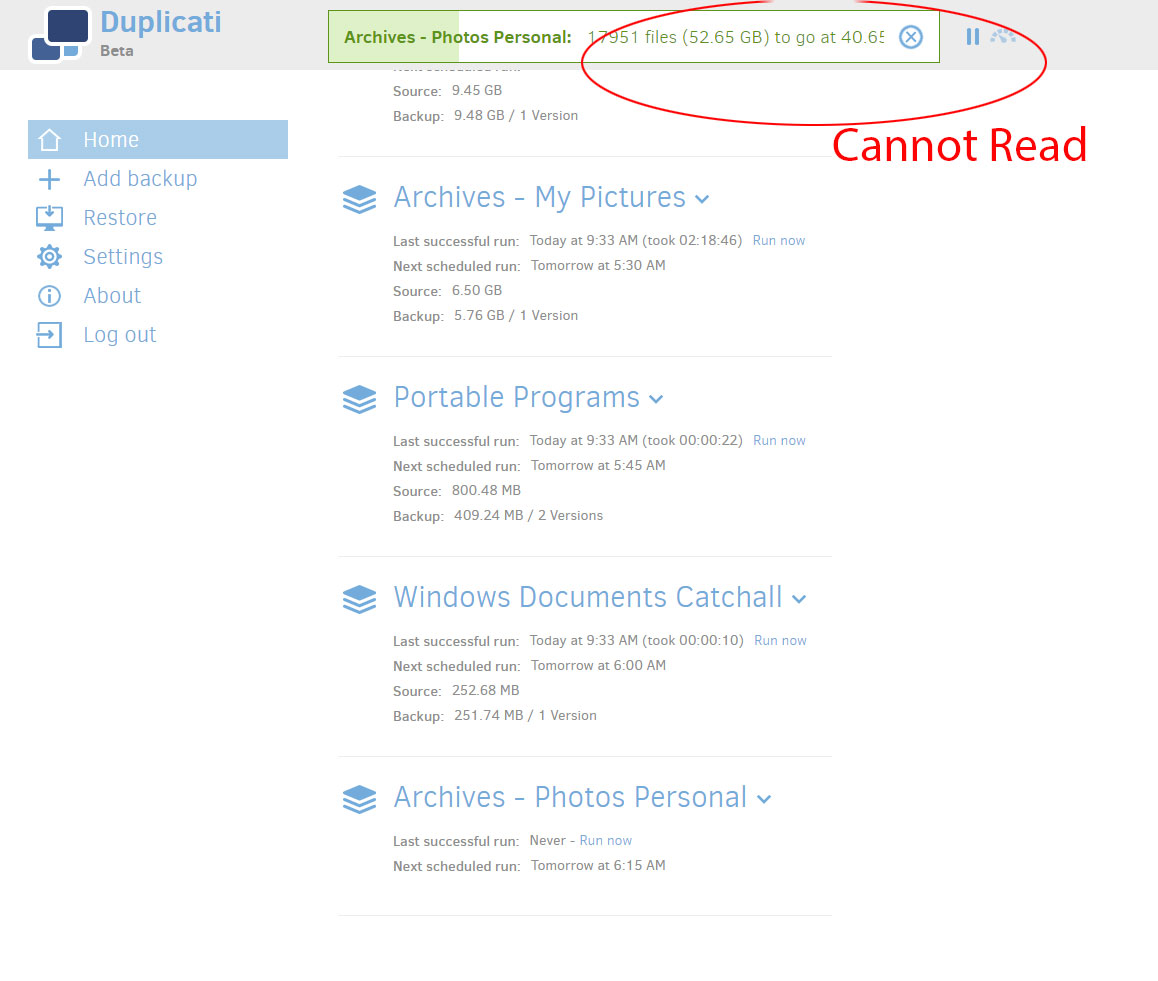 Be nice if the text wrapped, or the font was smaller. Can’t read the current transfer rate sometimes.

Hi @kevin.n, welcome to the forum and thanks for your input!

I’ve moved your post to a topic where issues such as the progress bar with long text blocks have been discussed.

While some improvements have been made, however there are still scenarios where things don’t always fit.

Note that I believe what you SHOULD be seeing an abbreviated job name on the left and the full stats numbers on the right.

Thanks! Looks good with long names [17] Although I guess with short names it takes a second to get used to. [00] The title attribute is a nice touch.

Hi Jon, I’m currently running Duplicati - 2.0.3.3_beta_2018-04-02, and not seeing full stats to the right. The only progress bar or stats I’m seeing is the one in the photo I attached. Sometimes it’s 100% visible but depending on the length of the name selected for the backup, it can sometimes run beyond the space available in the box.

I believe the updates to the progress bar that left justify the job name and right justify the stats were added to version 2.0.3.5 canary.

Note that if you decide to change from the beta channel to the canary channel to resolve this issue, I’d recommend you don’t update past 2.0.3.5 for now as I think some performance issues (and possibly more progress bar problems) were introduced in 2.0.3.6 and 2.0.3.7. Well, that is unless you want to help us debug the source of those new issues.