Implementing the feature to restore any version of a single file

Is anyone actively working on Show all versions of a file in the recovery tree? I started working on it quite a while ago, made some really good progress, and then had to drop it. If no one is working on it I would like to finish it.

I don’t know if there has been any consensus on what the UI might look like. For my testing I did the simplest thing of having a dropdown for each file on the normal restore screen, similar to this. I didn’t have any columns, just the modified time, a space, and then the file size.

I worked on this a while ago and ended up creating a small AutoHotkey script and we’ve been using it for about half a year now.
I’m a ex-CrashPlan user (we had their business offer until last year), so I tried to make the UI have a similar feel and feature set as what CrashPlan has.

I had plans to port this to the web UI, but time was never on my side.
Hit me up if you need help at any point.

I remember that CrashPlan capability, but I forget how it handled deleted files, e.g.
Restore deleted file (recently active on forum, and I think all of this has old topics)
notes the difficulty of getting started on restore if you can’t find versions to start at.

Deleted file retention used to be one of CrashPlan’s selling points. It got worse but
maybe it left some good ideas behind in terms of UI features handy for that design.

I haven’t thought about this in awhile, but thought I’d chip in another common “ask”.
Maybe that’s a separate request. It sounds like you already have a first cut at a UI.

If no one is working on it I would like to finish it.

I don’t think anyone is, so if you can pick it back up again that would be fantastic.

I liked the old CrashPlan interface for file restores, and the “show deleted items” was helpful.

I remember that CrashPlan capability, but I forget how it handled deleted files, e.g.
Restore deleted file

Yeah, it used to be great in CrashPlan and indeed one of the best points.
We used it a handful of times in 10 years, but it was a real nice to have.

Duplicati isn’t so great at handling deleted files, sadly.
I wish it had a specific setting to handle deleted files so that we could keep them for longer.

We workaround this by setting a very long retention for some backups, and we don’t ever prune those sets.

I might add a feature specifically to list deleted files to my script at some point, but since we didn’t use it much in all those years, I never got around to think about it further.

It got worse but
maybe it left some good ideas behind in terms of UI features handy for that design.

CrashPlan’s UI was not-so-bad, and then it got significantly worse. After their deleted file retention rules changed, I decided to just give up on it. It wasn’t even cheap and for less than I used to pay I have some space on rsync.net (which I trust MUCH more).

Those handful of times we did recover files in CrashPlan, the only thing of notice was just how slow and bloated it was. If you wanted to restore several revisions to find where a specific change happened, you would spend a lot of time restoring each revision separately, and would have to wait quite some time in-between. Not very nice.

One thing I always wanted was to be able multi-select a bunch of revisions and restore them all with timestamps. This way, I can easily diff and find whatever I’m looking for.
This is a bit of a poor-man’s source control, but my wife (the main user of this script) used this a few times with her art work, so it was a useful feature to have, even though she does use source control as well.

I had plans to port this to the web UI, but time was never on my side.
Hit me up if you need help at any point.

Excellent, thank you for the offer. I’m glad you’ve been able to use AutoHotkey to get this functionality for a while.

I haven’t thought about this in awhile, but thought I’d chip in another common “ask”.

To clarify, is the ask to handle deleted files? I think that should be handled as a separate task as it will have quite a different focus.

Here is the super simple UI I have right now. This is just the regular restore files screen. Every file would have a dropdown. When the user clicks the dropdown, the versions of the file are fetched and displayed like this. The time displayed is the file’s modification time not the backup time. 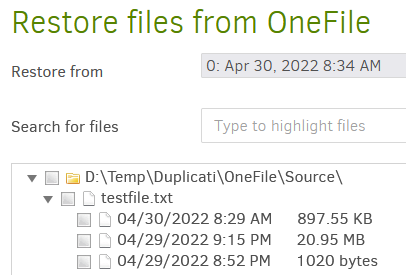 I have tested and am able to restore any version correctly. Right now I am working on what happens when you select multiple versions of a file. My plan is to append the modification date and time to the filename.

There are other questions like should the versions displayed show ALL versions of the file? Even if I select to restore from the first backup? I lean towards yes but then it might be nice to indicate for each version what backup it corresponds to as well. I’m sure there will be a bunch of little details like that, that come up.

The time displayed is the file’s modification time not the backup time.

There is an unlikely potential for version collision if you go to minutes. Might be fine to view but

My plan is to append the modification date and time to the filename.

might be an actual filesystem problem on a name collision. I suggest you check the behavior of
overwrite option (also in GUI buttons) does. I forget exact behavior, localized time handling, etc.

Open File from History/See File Content
Can I browse files in larger backups without having to restore the whole thing?

version option claims to allow a syntax where you can say several. I wonder if restore can do it?

I recall having had some trouble specifying by time (might be user error). The help text for that is

and I mention it here because time seems somewhat in the neighborhood of what you’re making.

Sorry - I am new here (and I am not a developer) - moved from crash plan 2 months ago.
Viewing deleted items (and restoring them) would be nice.

In CP - there are 2 switches - display deleted and display hidden.

When viewed in the UI - there is clear indication what is what.
Would be really nice to have such feature.

Also the versioning is very positive. What is on the screenshot looks good.
I am not 100% sure but I believe in CP even the deleted items had versions (the UI would replicate for the deleted items).

In CP - there are 2 switches - display deleted and display hidden.

Did you have a big enough backup for the restore display to take time you could notice?
If so, do you recall if the switches made a difference. I worry a bit about Duplicati speed.
Some of the SQL takes awhile, and we periodically get complaints about slow tree view.

I had 1.5 TB backup and the consumed space on their server was 2 TB.
There was no noticeable slowdown for showing the list of files when I checked the switches (to the best that I can recall).

If there was slowdown - it was related to the number of files in a folder. In my case I had maybe more than 23000 files in a folder (this is not unique as these are pictures - I am a photographer - my hobby).

The restore was not too fast (regardless if there were deleted files or not) because it took a while to prepare the restore - normally a zip file (if I am not mistaken). Once the zip is created however - it is up to the network.

A significant drawbacks in CP when it comes to restore are

There is an unlikely potential for version collision if you go to minutes.
I suggest you check the behavior of overwrite option

That’s interesting. I would think going down to the second should resolve that problem. e.g. “examplefile-20220503_200517.txt”, or however it should be formatted, for examplefile.txt that was modified on May 3rd 2022 at 8:05PM and 17 seconds. But I will look and see what the code for the overwrite option is doing. Thanks for the info.