How to install Duplicati on Synology / DSM

I used a Docker container because I couldn’t install a working spk in my Synology (DS1511+). But it took some time for a simple user like me to have all the settings working with the Docker container. A working native spk for me will be much easier to set up. I don’t know how to upgrade the Duplicati version in Docker (never looked for how-to’s in the internet), I don’t know if it’s better in terms of memory usage or other performance specs, etc. I tried the spk first, and I think it’s the easiest way. My answer (I repeat, as “normal” user) is that spk would be better.

DS218 with Mono works with Duplicati

Welcome to the forum, @Michael_Reifenberger !

Beware of using the Mono package from the official Synology package repository. It is an old 4.x version and is not fully compatible with Duplicati 2.0.5.x or newer. I recommend instead using the newer Mono package available here: https://synocommunity.com/

Thanks for making Duplicati. I’m using it to backup my (virtual) Synology 3615xs to Azure storage.

I can only access Duplcati within DSM if I access DSM using IP address instead of hostname - which is annoying but workable.
However, it fails to connect to Azure storage (cannot authorize)

My virtual DSM is running as a VM on my unraid host. So I instead installed Duplicati as a docker on unraid. There, it backs up my NAS volumes (using \<share>\folder) to Azure storage just fine - same credentials and details as what I entered on the DSM-installed version on Duplicati.

I also installed it on my WIndows Server VM to test there too. And it also works fine.

I will continue to run on Windows for now as it is working. And Duplcati is 100x faster than using DSM Hyperbackup to azurestorage!

I can only access Duplcati within DSM if I access DSM using IP address instead of hostname - which is annoying but workable.

You probably need to set the hostnames field in your Duplicati global settings: 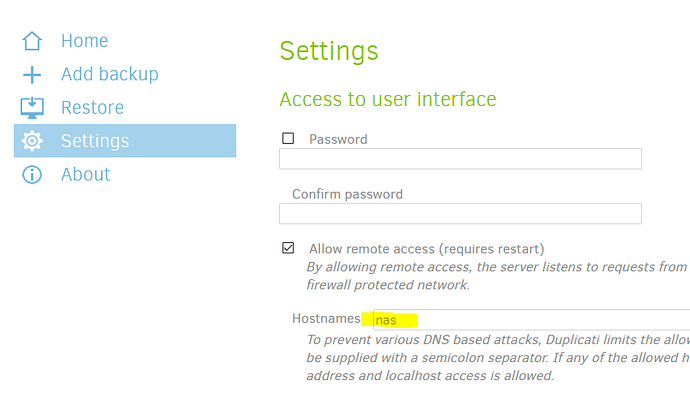 However, it fails to connect to Azure storage (cannot authorize)

I wonder if it’s a mono certificate issue. Performing a cert-sync may resolve it.

Ah, thanks! That did it

I wonder if it’s a mono certificate issue. Performing a cert-sync may resolve it.

Once I fixed up hostnames, and re-started Duplicati from within DSM (using hostname), the azure connection test worked. So not sure why it did not work first time…

Really appreciate the suggestions. I prefer to use within DSM, as the sole purpose of the box is backing up (it runs ActiveBackup for PCs, servers, ms365 and is a backup vault for photos). So I like to keep it all together.

So I recreated my “Photos to Azure” backup job - and pointed it to the same container where I had run my initial job from my Windows install. Duplicati detected the files on the destination and stated it needed to repair the local database. So I’ve kicked that off (about 10,000 “files” need to be updated into the db). If that works and means I can then continue runningthe incremental backups from DSM then Duplicati just went up another notch for me.

Hello,
Sorry but i get “connection to the serveur is lost” message.

I have mono who is running.
I install duplicati 2.0.5.1 from the website
my user is in the http group
But in the synology dsm 6.2 i can’t run duplicati.
I have a DS420+ 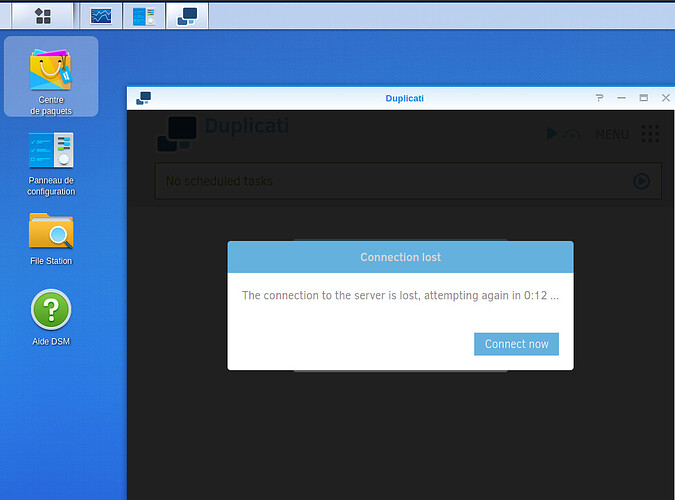 I have mono who is running.

What mono version are you using?

Can you confirm for sure? As far as I know, mono was only available in the “beta” synology repository, and has since been removed. It used to be a 4.x version which is too old for Duplicati.

I don’t see a new duplicati-user.
I add the current user to http groupe

That’s correct. The login you use to log into your Synology should have http group.

I had an issue where I installed Mono Beta from the Packages. But it was version 4.

Did you add the synocommunity package? And from Community download that version? Version 5? Just to be sure.

Last thing I can think of (I’m far from an expert)
is webdav installed and working in your NAS? With also http access enabled?

Question to the dev/creator of the guide: installed it on a Ds214+. It seems to work, but haven’t done a restore. What’s the best way to check that? If it works, you could add the ds214+ to the list!

I don’t see why I should have webdav running, but i confirm, i use it to another purpose, so it’s running.

I don’t think you need to do anything with WebDAV unless that’s the protocol you are using with Duplicati.

I think too, but for now, i have no idea why it’s not working.

You are still having the “connection is lost” error? Does this happen right away after starting the Duplicati package? If so, has it ever worked for you at all?

no, for now, duplicati never start.
My setup is new, i never run duplicati on a synologi env