How do you use PCloud?

I have tried backup to the PCloud “marker” directory as destination, which sort of works but the upload is REALLY slow. Much slower than implied by the benchmarking done in this wonderful thread.

I am thinking about backup to a file server I have, then syncing that destination dir to PCloud from the server. That way, the backup would be finished from my machine’s POV. The file server could take its own sweet time.

In my testing for the scenario I label ‘pcloud virtual’ - the backup target was the pcloud virtual drive (by default drive letter P in windows explorer).

As far as I can see - the pcloud behind-the-scenes magic makes it looks like a local drive to duplicati so the numbers look pretty much the same as local backup and in the background the pcloud software would sync to the cloud (the backup computer can be the same running the pcloud software).

In your setup - you have two distinct machines right? backup computer running duplicati with the target to another computer (file server) doing the pclound syncing. In that case there is a slight difference as there is a network link in the middle and potentially that is the source of your different experience.

I am thinking about backup to a file server I have, then syncing that destination dir to PCloud from the server. That way, the backup would be finished from my machine’s POV. The file server could take its own sweet time.

That’s what i am planning to do it, as i have at least 2 clients and a NAS to backup - so they’ll all backup to one device and it will slowly backup to the cloud at some ungodly hour. At this stage i’m looking at using Backblaze B2 but i haven’t decided yet.

I note on the spreadsheet in your linked post that it says Backblaze is UL (unlimited) and $50/year. I don’t believe this is correct for Linux users - only B2 is available to us and it’s not unlimited

we pay per GB.

I am using Linux. PCloud there looks like a directory off my home dir. I plan to inquire if I can move that somewhere else, so I can just backup my home dir without weird exclusions or disappearing up my own arse.

The background synch is observable if you open the little status applet you get with PCloud (at least on Linux). I am seeing an upload rate of 200-300KBytes. This is comparable to B2.

My firewall tells me my data is going to AWS buckets. Based on the cost for PCloud I think I would be better off with S3 Glacier. Maybe I missed this in the thread but, can I ask why you didn’t test Amazon?

basically tested free services. IF you help provide me some AWS credentials I’d be more than happy to resume testing

but maybe this helps you give it a whirl?
https://docs.aws.amazon.com/awsaccountbilling/latest/aboutv2/billing-free-tier.html

thanks for the link dude. I am going on a vacation for a bit but when back will investigate and try to get it working to add to the test results.

I am thinking about backup to a file server I have, then syncing that destination dir to PCloud from the server.

I don’t have any input on your performance issues but did want to say that it’s generally a good idea to have both a local backup (file server) for faster restores AND a remote one (PCloud) in case of local issues. So regardless of performance I’d give a thumbs up to your plan.

Thanks. I have /var/duplicati on a separate spindle receiving my most-local backup. That one protects against software failure and PEBKACs.

Then the dir on the server in case of hardware failures.

Finally {TBD} in the cloud in case of fire, etc.

I think I kind of have a handle on what’s needed, given what I do for a living and all.

It’s always nice to find good examples to try to live up to.

basically tested free services. IF you help provide me some AWS credentials I’d be more than happy to resume testing

Write me a PM when you are back, and I can give you a test account.

So here is what I settled on to use pCloud

And I have completed a full backup (~450GB) to the dir I am synching to pCloud. It took just over a day to finish the backup job. pCloud will be synching that for almost a week.

@kenkendk you might want to see what a backup job that runs for just over a day looks like in the UI: 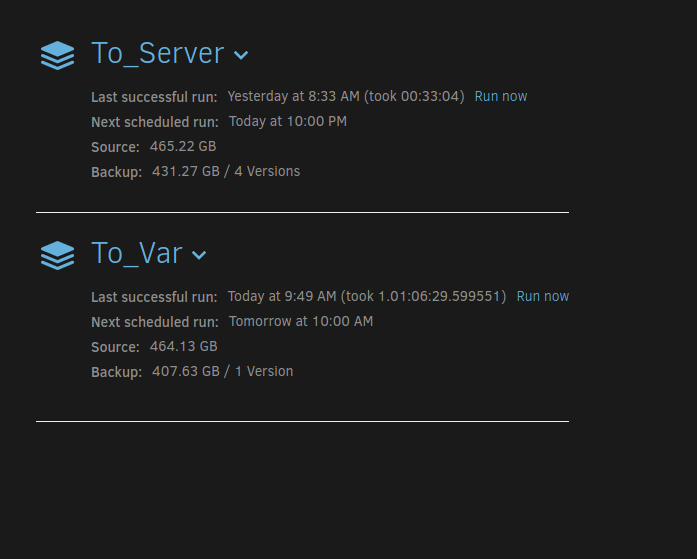 @Kahomono - did some testing around AWS; very interesting conclusions:

So that is to be pretty much expected. What was really weird was I also tested other data centers (Asia Pac (Sydney), US (North California), EU (London)) and turns out - Sydney despite being pretty close geographically has really slow speeds. Firmly middle of the pack even compared to the other webservices with some really bad outliers. To be honest, the result is so bad perhaps one of the devs can look into the comms between AWS Syd region to see if there is some odd interaction going on causing the slow down.

Ignoring Sydney, seems like choice of data datacenters not so important as the speeds are pretty much the same between choosing EU / US.

Conclusion - S3 really the fastest cloud storage, especially wonderful if you have a local data center but even otherwise can get unbeatable speeds. but you should test a couple of datacenters to avoid picking a dud.

Hope this all helps!

For reference, link to my results spreadsheet and detailed AWS results table below.