So I’m a glutton for punishment and want to back up my whole C:\Users folder on my Windows box. Obviously there are plenty of things in there I DON’T want to backup so I’m putting together a list of Exclude Regular Expression filters to ignore stuff like:

I’ve come up with a few questions during the testing of these rules:

Is there a different between the test-filter and test-filters Commandline options in the GUI?

No, they are the same. There are two because I could never remember if it was called one or the other, so now they just alias to the same functionality.

How do I deal with folders that show up as Including folder: in the test-filters results even though they are red-Xed out in the folder GUI when my Exclude expression is added (nice feature by the way!)?

Good question. Could be that there is a discrepancy between the display and actual filter engine. Can you give an example?

Has a GUI tweak been considered to allow for a “here’s my expression, will it match this folder path” type tester? (When dealing with a whole C:\Users folder test-filters can take quite a while to run just to test for a single folder match…)

Yes, the filter GUI works for simple cases, but we should also have some more advanced stuff. As always, time is the problem, so if you can code something, please do

In trying to narrow down an example to something less than a bajillion lines of “Including folder…” I’ve figured out that if I reduce my filters it then --test-filters works as the GUI implies it will.

I’ll post again once I’ve done some more testing to figure out at what point (or what expression) things start falling apart.

I did a fresh install on a Linux VM and ran into the issue again using regular exclude folders (rather than regexp). Here are some screen shots - and since this is a play VM I can do any testing / resetting you need on it.

Whether it’s due to the newer version, Windows (vs. Linux), a different set of job parameters or something else I don’t know - but I thought I’d share until I can get around to retesting on the Linux VM again. 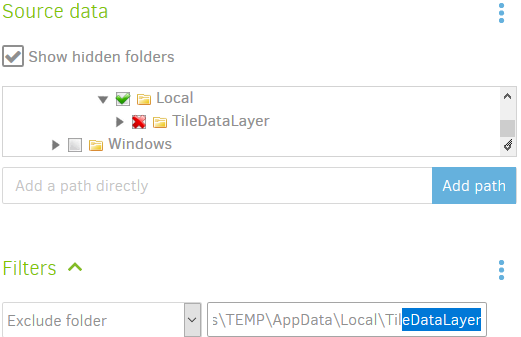