Duplicati scheduler only active when user logged in and GUI running?

Hi.
Is the Duplicati scheduler only active when a user logged in and the GUI application is running (taskbar icon)?
I use Duplicati to run backups on a windows server, where not always a user session is active and thus the gui application is not running.

The best method for me would be to export the backup as command line and schedule the command in the windows task scheduler, I guess?

Maybe it should be mentioned somwhere that the GUI application has to be running for the scheduler to work. I assumed duplicati was running as a service to schedule the backups when I set it up…

That should work, another option is to install Duplicati as a service using the Duplicati.WindowsService.exe command.
This video demonstrates it:

Thanks for the quick reply. I am going to use the service install.
I assume the Duplicati.GUI.TrayIcon.exe should be removed from the startup to prevent conflicts when Duplicati is installed as a service?

You can still use the Traycon but you have to add a parameter:
“C:\Program Files\Duplicati 2\Duplicati.GUI.TrayIcon.exe” --no-hosted-server.
I’m using it while Duplicati is running as a server.

My problem now is that I cannot select a backup destination when configuring a backup. The list is just empty (see screenshot below) 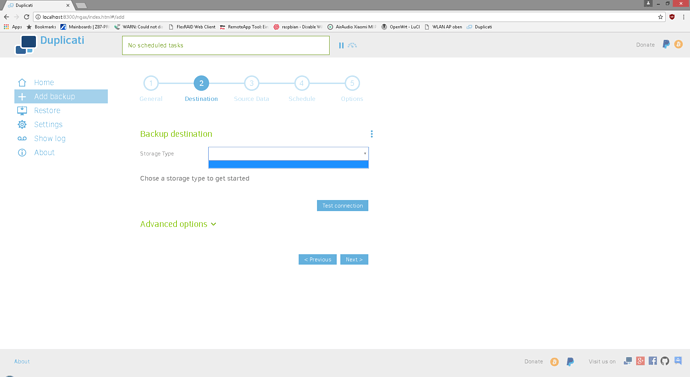 I get the exact same thing. I posted about it in a different topic:

It used to work for me.

Thanks for the quick reply

In your screenshot I see that the Duplicati server instance is listening on port 8300. The default port for Duplicati is 8200 (unless already in use), so it seems that there are multiple instances running.

The re-installation and setup must have fixed the multiple instance issue if that was the problem.

The re-installation and setup must have fixed the multiple instance issue if that was the problem.

Cool. I have on my work list that the MSI installer should allow “install as service”.