First, impressed by duplicati. I created an OAuth key that I used on one client’s server and it uploaded the files for backup and placed the correct folder name in the root that was visible from multiple pcs via the GoogleDrive web UI. I used the SAME OAuth key on a second client’s server (different lan different city) and while it said “Folder does not exist do you want to create it” as it had before it was / is not visible in the googledrive web ui. The files must be there as it correctly connects and when restored to a different location they look the same. Test connections reply positively. Do I need to create a separate OAuth key for each server? I did not see any choice other than “limited” on the google OAuth link. I am trying to provide online backup to multiple clients in one account and would like to see all folders in the googledrive web UI.

P.S. If someone could add a leftward pointing arrow to the field that says “Click the AuthID link to create an AuthID” it would save morons like me that didnt notice the blue color of the field label as a indicating a link

8 days and not even a comment? Is this a support site where only noobs post problems? As a noob i did search and found some entries that referenced how folders created with drive are not seen by duplicati and when duplicati creates a folder both folders with the same name show but this is not that. I created the folder from one server and it showed in the googledrive ui with the folder name created by duplicati. From another machine, using the same OAuth key as the first duplicati said the folder was created, was able to restore files but the folder it created did not show in the googledrive ui. Is there not a duplicati guru out there that wants to address this or just call me stupid for not describing the problem correctly? No advise at all?

Sorry, we have limited volunteers on this forum. I personally don’t have experience using Duplicati with Google Drive so I was leaving it for someone else to answer.

Hopefully you’ll get a response soon!

Is this a support site where only noobs post problems?

Not at all, we have people post issues that range from very simple to very complex!

Is there not a duplicati guru

You might need a Google Drive guru instead. If Duplicati can restore to another system, it got the files.
Sometimes nobody knows the answer. The only thing I found when I first saw this was with OneDrive:

Thank you. So that’s two of us. To try some testing, have you tried creating files by hand on a system?
Do they show up in the other one? I am assuming you meant Google web-based UI. If not, say what UI.
If backup is significant space, did you see the space value drop on both of the two systems in Google?
Browser hard refreshes (often Control-F5) and logout-login are sometimes good generic problem fixes.

I just tested this with Google Drive personal (not business) on two Windows PCs at drive.google.com.

Clicked Yes, got Connection worked! box, folder showed up in both system browsers within seconds.

Above using Test connection button and a Storage Type of Google Drive, but I think yours was too.

What’s different between these tests (besides results)?

is one difference (you actually tried a restore), but this is just a Google Drive web UI on same account?
If Google web UI is showing differently on two systems on same account, I don’t know why that can be.

I don’t use Google Drive for my backups either, but I think I remember something a while back about Google changing API access so that apps only had access to the data that they had created. One side effect of that was that files created by Duplicati would no longer be visible in the default UI.

But someone would need to make the code change and test it (and maybe give some option to force reapplying that to all existing files in a backup?)

I wonder when that was? Google Drive has for a very long time had drive.file scope, as per:

meaning “Per-file access to files created or opened by the app.” so safer compared to full access.

One side effect of that was that files created by Duplicati would no longer be visible in the default UI.

My files created by Duplicati show up just fine. For OP, it sounded like some PCs saw it, some did not. 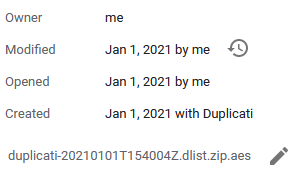 placed the correct folder name in the root that was visible from multiple pcs via the GoogleDrive web UI.

is ambiguous, but I took it to mean the folder name was visible (i.e. “placed”) unless that refers to the root.

We probably need to wait for clarification from @billb1313 on “different lan different city” different results.

I have the same situation. Is there a solution?