Good morning! I have two separate backup jobs that run from the same machine. However, when I run one backup job, it will freeze up at the end of the job and just continue to say “Remote Backup (Job Name): Backup Complete!”. It doesn’t ever finish, which then results in the other jobs being unable to run. I have removed the schedules from all jobs, and the same results occur when manually selecting and running jobs. The only way to reset this is to kill duplicati from task manager. Any Ideas?
Thanks!

Go to About → Show Log → Live and set the dropdown to Verbose. Watch for events there, it will help determine if Duplicati is actually hung or not.

Hey! I did that, I took a screenshot of what I see and I am posting it below. 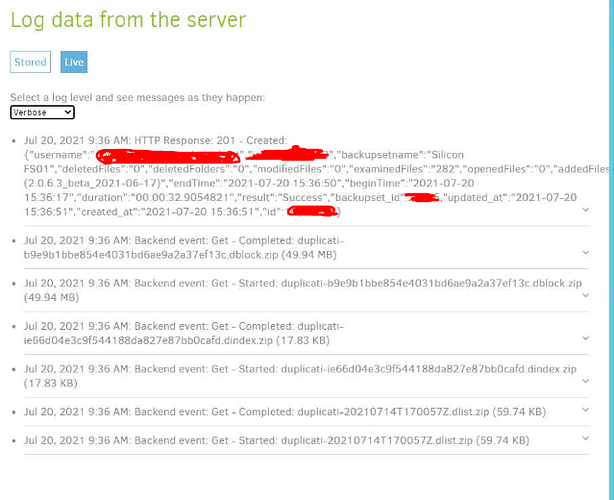 That’s EST, The screen shot was taken around 10:30AM

Sounds similar to the issue posted in another thread: Duplicati lock up

Ok, after disabling that option, the backups appear to run without issues. Not sure what is causing that loop as I have that option enabled with the same email recipients for other jobs/machines and they seem to run fine. Thanks for pointing me to that thread!

I have that option enabled with the same email recipients for other jobs/machines and they seem to run fine.

I suppose you could test using the GUI Commandline for bad job to run The SEND-MAIL command while watching About → Show log → Live → Profiling to see how the SMTP conversation with the server goes.

This one might drag on for a bit because of the nature of it and the default logs definitely do not show the issues well enough.

I switched my OS’s around, so as soon as I can try it from here (and if it happens) instead of running back and forth to another computer, it should go more smoothly with solving it - at least from me anyway.

Based on what I see, if it happens for you, its going to happen more. Code problems are code problems. When they get hit just right, it happens.

the default logs definitely do not show the issues well enough.

Ok, after disabling that option

I assume refers to mail sending. Please clarify what it was, if it was some other option that was disabled.

The small chunk of screenshot posted earlier looks like backup itself finished, and (going from bottom up because live log runs that way) it did Verifying backend files in the three Get requests that are one sample as described in The TEST command. send-http-url., and did send-http-url, then hung on trying send-mail.

@Se_technical, does this sound correct from an options point of view, meaning you originally had both?

The only way to reset this is to kill duplicati from task manager.

What does it look like upon restart? Are there signs that backup finished, e.g. a log file, or an HTTP report, or the Restore dropdown showing the new backup, or the home screen backup version count increasing?

I meant by default from a programming perspective

Its possible that no current log code as detailed as it can get in Duplicati helps understand what’s going on with this issue at all. You can certainly try though but I feel it will probably always fail. The duplicati code here is very very complex with jumps everywhere and not enough logs. If you do it I will be impressed.

Though, it should be possible to clear it all for example when it says backup complete. It should be cleared no matter what there. But there’s other things going on and it gets whacked out. The UI should definitely at least not be stuck with that.

Since I previously replied to this thread before, made important progress on this just now, and can get it to move again.

It could still take some time before something trickles down to release to improve it for you as more is necessary. But, its getting there. There could also still be reasons I’m unaware of but what I’ve found might hopefully include it all.