This might be the wrong forum - but I thought I would give it a try.
I have managed to installed a FreeNas jail running Duplicati and after some buggering around managed to log in. I then created 3 folders in /mnt called (Install, Music, Data) and then use FreeNas to assign mountpoints to the appropriate datapools in FreeNas - so far so good.

If I then open a shell into the Duplicati Jail, I can see the mount points I have configured and cd into them to find all the files in the datapool(s). whoami says I am root

I then open duplicati up and set up a backup but when it comes to selcting files /mnt is empty. This implies that duplicati, the program, is running as a different user with different permissions - but I have no idea who or how to find out.

Background Info:
FreeNas is domain attached
The 3 datasets are shared using domain permissions appropriate to the folder, but all have standard freenas owner@ and group@ permissions as well
The 3 datasets are configured under an SMB dataset that isn’t CIFS shared, but that everyone has access to via evereyone@, group@ and owner@

I feel this ought to work, and its annoying me that it isn’t

I only tested FreeNAS once with the Duplicati package, but from what I recall it does not run the process as root. You can verify by opening a shell into the Duplicati jail and running:

You may need to change the setting and have Duplicati run as root in order to back up all your data.

Yeah, it’s running as user duplicati instead of root. That is controlled by the FreeNAS jail configuration, it’s not a Duplicati setting per se.

OK, that makes some sense BUT
if I shell into duplicati, I am running as root, and root can see the files. Presumably therefore running duplicati as root rather than as duplicati that should work should it not? Any idea how?

I have found a file in / usr/local/etc/rc.d 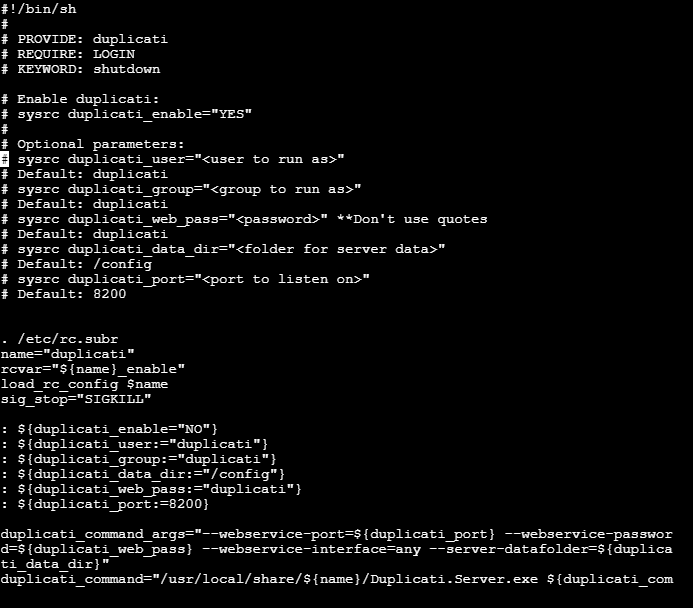 would editing some of these # entries - duplicati_user help. OR should I try and find where this is called from… [any idea how]?

Yep that looks promising. You could try editing that file and then restart the duplicati jail.

And now duplicati doesn’t start at all

Another thought. I looked at the folders I created in /mnt. These folder are what I mount the FreeNas folders to so I can segment the backup into different processes.
root can see these folders, but duplicati cannot. All duplicati can see is the /mnt with nothing in it.
I created these folders as root.

What do I need to change so that the user duplicati can see these folders, and then maybe duplicati will see the files below that

And now duplicati doesn’t start at all

bummer… sorry, I have very little experience with FreeNAS jails. Maybe another user with more experience can speak up.

What do I need to change so that the user duplicati can see these folders, and then maybe duplicati will see the files below that

That may be part of it, but Duplicati still needs to read files within those mount points. So if any don’t have at least read access to “other” users, Duplicati won’t be able to back them up.

What are the current permissions of the mount points within /mnt ? Can you do an ls -l /mnt and show the output?

Thank you for your help

The result is that all three subfolders of /mnt are drwxrwx—, but I have been messing around with chown to no avail

If I give access to everyone in the FreeNAS settings then Duplicati has access. However I consider giving everyone access, which also effects any Windows (CIFS/Samba) shares a s a bad thing, and walk over any form of security.

The duplicati user is not defined in FreeNas, only in the Jail so I have no apparent way to assign privaleges to duplicati

Personally I would just get Duplicati to run as root in the freenas jail, instead of changing permissions on your nas shares.

When I mentioned the freenas web UI I was talking about management of the Duplicati jail. There may be a way to get Duplicati to run as root there. If you are still stuck I can try bringing up a freenas vm to experiment

I tried messing with a load of settinsg for the Jail. No effect.

I agree with you that running duplicati as root will solve the issue. Just can’t figure out how. I am not an “ix” expert by any stretch of imagination (even mine)

Give me some time to mess around with it, I’ll see if I can figure it out…

I attempted to change the user that Duplicati runs as by issuing these commands (from within the jail shell):

I believe that is the correct method instead of editing the /usr/local/etc/rc.conf file directly.

I also changed ownership of the Duplicati config files:

I restarted the jail and noticed the same thing you did - Duplicati doesn’t start. But what’s weird is you can manually start it by doing this from the jail shell:

It seems to work and it is running as root:

I don’t understand why it no longer auto-starts after issuing those sysrc commands to change the user it runs as. I’ll try to do more digging when I have time, but I wanted to share my progress so far.

I also have had some luck.
Speaking to a freind of mine he came up with an a idea.
Given that the jail file structure is part of the FreeNAS file structure. He suggested creating a user with the same UID as the UID that was in the Jail passwd file (1001)

So we created a user in FreeNAs with a UID of 1001 to match the 1001 inside the Jail and gave that use all rights over the Dataset that we were trying to backup.

And it worked - the duplicati user can now see the files in the mounts
and back them up
and restore them (even more important than backing them up). caveat - I am getting some restore errors about failing to apply metadata to some files but the files are there and working.
[I am testing with a bunch of MP3’s so testing the files is quite easy]

BUT the specific file mentioned is back and readable. I think this is a different issue (currently), also permissions, but different

Following the post you linked would be the intended course of action. You will find similar posts if you look for information around resilio sync or other plugins that you want to interact with your datapools. Plugins use the freebsd jails construct. Jails are isolated to themselves by design and require a bit of tweaking to get to interact with the host system.

I have read here it needeed to create a user in truenas with the UID in the jail duplicati…
But how to know the UID of duplicati ?

Many thanks for your help