Why D2 doesn't run as Windows service as LocalSystem or my user?

Main reason for that is to run shared PowerShell script. May be there is another solution?

I believe in Windows the service runs as “Local System account” by default but can be changed to something like your own user account from the Services control panel as seen here: 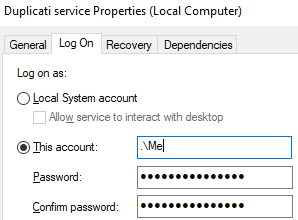 Main reason for that is to run shared PowerShell scrip

If so, what happens when you try to run it right now?

Thank you for your answer. If i change logon as to my account, service will start, but i can’t access to web GUI.
Yes, I run Powershell script via cmd-file. I need to access to a network folder via PS. But I can’t if D2 run as service via LocalSystem account.

i change logon as to my account, service will start, but i can’t access to web GUI

That sounds like something we can resolve if you want to go that route, but remember that running as a user account (with password entered) means if you change your password you’ll have to remember to come into the Service control panel and change it there.

I need to access to a network folder via PS. But I can’t if D2 run as service via LocalSystem account.

Yep - that’s a common problem. The easiest way to get around this is probably to have a local script that LocalSystem can access that then calls the remote PowerShell file through escalated permissions (such as a temporary drive mapping or maybe even direct UNC call).

I found solution via network access to my remote PS script. But unfortenately, environment doesn’t forward to sctips, but does for my local script or network script started via D2 started as application.

I don’t understand why.

I found another solution - start remote cmd-file. Why I have not guessed before!?))

May be in the fact that on server I have full remote access via “\my-domain\path” but on workstation via network connect with user/pass obligatorily.

So I don’t need to start Windows service or from my user anymore). And I connect to remote folder as destination via user/pass.

May be it better solution that subject.

So you can get your Duplicati service running as LocalSystem to run a remote script as part of --run-script-before or --run-script-after by using start <remote-cmd-file> as the script name?

Yes, but without “start”. Using only <path to remote cmd-file>.