In the process of signing up for Backblaze B2 and use Duplicati to handle the configuration portion, my questions are - and I would be greatly appreciated if you can help:

Thank you very much for responding, very much appreciated…
Clarifications:
"You can set something very simple like “keep all backups for 4 months”
so in the Backup Retention (Duplicati) I would select

so this option will delete backups older than 4 mo., is that correct to say?
it’s like a recycling process…keeping backups for 4 mo. would increase the bucket size exponentially large?

"Configure your B2 buckets to keep “only the latest version” of a file."
what would happens to other version? where are those kept? If B2 keeps only the latest…

"The B2 versioning is not compatible with Duplicati"
what do you mean by that?
either use one or the other? but better use Duplicati…
Which is what I’m planning to do…

I will take in consideration the Server part…
" (You could use the same B2 bucket but you’d need to use a unique folder name - I would just keep it simple and use a separate bucket.)" Separate buckets for those drives that are being mapped to workstations…for ea. different folder in the server?

Thanks again for the time and help responding my questions…

so this option will delete backups older than 4 mo., is that correct to say?

Yes. Backups older than 4 months would be deleted if you use that setting. You would only be able to restore protected drives/folders as they were within the past 4 months.

it’s like a recycling process…keeping backups for 4 mo. would increase the bucket size exponentially large?

If Duplicati didn’t have deduplication, then yes, the longer retention would significantly increase your storage on the “back end”. But with deduplication you can keep lots of backup versions without it taking a lot of space. Duplicati only needs to store the portions of files that change. So if most of your data is static, you will find that you can retain lots of versions without using too much storage.

On my main PC I protect 450GB with Duplicati. I currently have 187 backup versions and it is consuming only 585GB on the back end.

what would happens to other version? where are those kept? If B2 keeps only the latest…

With Duplicati the file versions are handled within the ‘latest version’ of all files it stores on the back end. Basically Duplicati does version retention with the assumption that the back end ONLY keeps the latest version of any file. B2 supporting versioning may be useful for other applications, but it’s useless with Duplicati. Don’t use it.

Separate buckets for those drives that are being mapped to workstations…for ea. different folder in the server?

Each backup job on each computer should have a UNIQUE target. It can be separate B2 buckets or separate folders in a B2 bucket. A single backup job can include multiple drive sources - that’s fine. But don’t configure more than one backup job to target the same backup location.

Thank you so much for your valuable information…take care!!!

Morning! Just started using Duplicati with Wasabi, Backup was running but here is what happened:

1.- All the backup task are gone from the GUI interface. Had like 7 jobs running. Wasabi is showing all the files on the cloud and I was able to find the sqlite files, how do I get those back listed on the task? 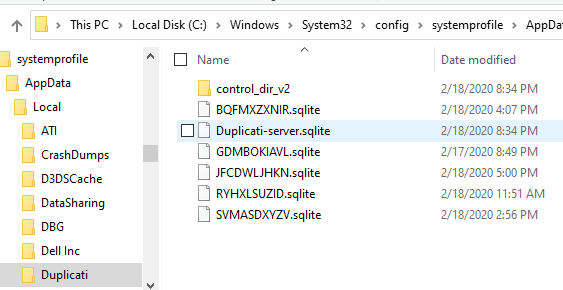 2.- Running from localhost:8200 - before and after jobs were removed… 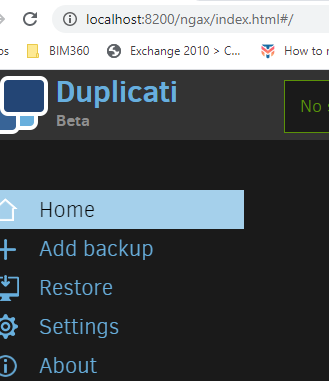 3.- I can’t update to latest Duplicati , I get the install click on it , start downloading and them get install again, in a loop…Windows 10 Pro:

Task Manager is running the following:

What should I do to get backup tasks back and continue with jobs?

Do I need to re-create jobs? later sync with Wasabi?

Any help / comments would be greatly appreciated…

I have disabled duplicati services, if I enable, I get redirected to localhost:8300, not 8200

When you upgraded, it sounds like it switched to operating as a regular user process instead of service. Remove duplicati from your startup folder and exit any tray icon that may be running. Then, after confirming there are no Duplicati processes in Task Manager, enable and start the Service. It should bind to port 8200 and you should be able to see your jobs again.

In the future, when you are going to do an upgrade make sure to:

Thank you so much for your help! I was able to Update and recover the backup jobs, all seems to be working so far…confusing part is the Server / service 8200/8300 port…at least for me…very much appreciated!