Use archive bit to exclude files from backup

It just occurs to me that a nice way of selectively excluding files could be via the archive bit. It can easily be changed in windows explorer so that one could easily exclude files one finds while browsing folders for example, without even having to go near duplicati.

Would this be possible and if so, has it been considered?

To be clear: what I’m basically asking for is something like this this: 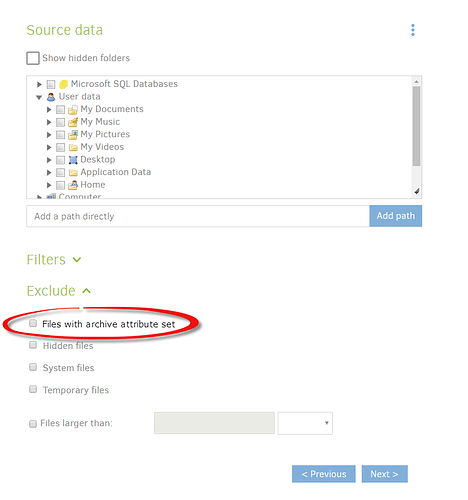 Interesting idea - but I’m not super familiar with the archive bit, what else uses it and is there a risk of other things changing it?

(BTW - I tweaked the topic title to fix a typo.)

Yes, it would be possible to use that, but I opted to not put it in there. The reason is that Duplicati does not set the archive bit, but other programs may set/unset the bit:

I opted to not put it in there. The reason is that Duplicati does not set the archive bit, but other programs may set/unset the bit

To me, the fact that duplicati does not set the bit itself is actually an advantage, because that way I know that I’m in complete control of that bit and can hence use it for the indicated purpose. In other words, my suggestion is to use the archive bit in quite a different way that it was originally intended. And I think it is possible to do this, because it is rarely been used anymore. A bit like when they decided to use the @ symbol for emails because it wasn’t used for anything else.

Yes, there is a risk that other programs might still use it and duplicati should perhaps warn about this in the help text, and perhaps it should not be in the GUI at all, but as a commandline/text option, I think it should be okay.

There was another suggestion to use a marker file, like no.backup, and if this file is present in the folder, just ignore it.

This does not give you file-level granularity, but would it work for your use case?

This does not give you file-level granularity, but would it work for your use case?

I suppose it would be better than nothing. I’ll keep it in mind and see how many of the ad hoc exclusions I would like to make it would cover.