"The underlying connection was closed: Could not establish trust relationship for the SSL/TLS secure channel"

I’m using it to back up files to, among other targets, my Strato HiDrive cloud space using WebDAV. A few weeks ago I noticed that often, but not always, Duplicati would abort the backup with the error message “Die zugrunde liegende Verbindung wurde geschlossen: Für den geschützten SSL/TLS-Kanal konnte keine Vertrauensstellung hergestellt werden.” The message is in German because my Windows is German, I guess, although the Duplicati UI is set to English. I assume the English equivalent is “The underlying connection was closed: Could not establish trust relationship for the SSL/TLS secure channel”.

The strange thing is that I don’t get this error all the time, about 3 out of 4 backups fail, so it doesn’t seem to be a general configuration problem. But the more data I have to back up, the more likely it is Duplicati aborts the backup with this error.

If anyone could shed some light as to what’s going wrong, that would be great!

Thanks in advance for your help, 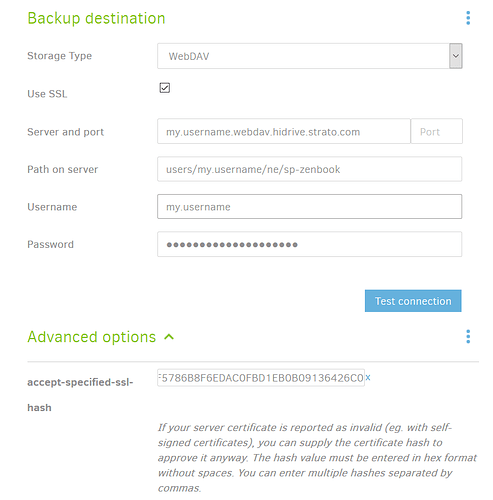 It seems you have specified a specific hash. If Strato has different certificates on different servers, you can easily hit multiple certificates.

The option is meant to support users who have self-signed certificates, and should not be used against commercial providers, as they will certainly have valid SSL certificates.

There is another user here who reports a similar error message:

Error: "The remote certificate is invalid according to validation procedures" Support

Hi, First of all thanks a lot for all your work! I really love duplicati and I am using it since some time already. But since a few weeks I get this error “The remote certificate is invalid according to validation procedures” (german: “Das Remotezertifikat ist laut Validierungsverfahren ungültig”) and I don’t know where it comes from. My setup: I have duplicati running on Windows 8 / 10 and the backup storage is an HDD connected to my fritz.box. The file transfer happens via FTP. When I creat…

thanks for your quick reply!

So, I took out the --accept-specified-ssl-hash option for a test.

What best to do?

Since the server is public, you can maybe try SSL labs and see if there is an issue with the certificate:
https://www.ssllabs.com/ssltest/analyze.html?d=webdav.hidrive.strato.com&latest

When I try with the basic url, I get that the root CA is Thawte:

It seems that your operating system is perhaps missing the Thawte certificate? Or maybe you hit another server than me?

I have this problem on all my 3 computers where I use Duplicati with HiDrive, one Windows 7, one Windows 8, and one Windows 10 machine. They all exhibit the same behavior…

I’m a bit lost at what to do next. If you’d like a test account on my HiDrive could space, I can set up a separate account for you.

In your screenshot you have a different hostname. Does this hostname point to the same IP as well? If I look up the server name with nslookup I get a single IP (the same), but I was wondering if it looks different from your machine?

In your screenshot you have a different hostname.

That put me on the right track :). Actually, it’s not a different hostname, it’s the syntax as mentioned here: HowTo: Strato HiDrive - Duplicati . This syntax, i.e. using “username.webdav.hidrive.strato.com” for the server name, seems to have worked until a month or so ago.

I took the username part out and now it seems to work. I just tried an approx. 6GB backup and didn’t get the error.

So maybe it’s best to either edit the info on the old Duplicati HowTo page, or delete it. But since Strato HiDrive is quite popular it would be a pity if people wouldn’t find the info online that it does play nicely with Duplicati :).

So maybe it’s best to either edit the info on the old Duplicati HowTo page, or delete it

I have updated the page to mention the changes.

I have on my TODO that I should make similar guides for Duplicati 2.0 but it is a loooong list

I have updated the page to mention the changes.

Thanks! I just wonder though whether people might not notice the additional text it and just go by the screenshot, which still has the username portion…

All the best,
Stephan

The real solution is to make the guides for 2.0 like the ones René did for 1.3.x.

I am receiving the exact same error message as mentioned in the title of this thread. I have pointed Duplicati on my Windows 10 laptop to my OwnCloud server via WebDAV. After about five minutes of it working on my 100+ GB backup, it errors out with the above message. I am also using a self-signed certificate and the “–accept-specified-ssl-hash” option in Duplicati. I also tried the option to accept all certificates, the symptoms were the same. I have experimented with various different WebDAV paths in the configuration of my backup (OwnCloud supports various different, working ways of expressing the WebDAV/DAV path). The “Test” button confirmed all of them to work. But the backup fails after a few minutes again.

Is there a way to just tell Duplicati to retry automatically when it fails? It seems like as soon as there is an error, it abandons the backup.

I am using Dynamic DNS for an ‘external’ connection, I am not connecting to my OwnCloud server through my LAN, although I am on the same network right now.

My OwnCloud server is Ubuntu 16.04. My Windows 10 backup client and my Ubuntu server are actually in the same room for these tests. so I am also leaving room for the possibility that my router is a factor here (an ASUS RT‑AC68U with newest firmware).

Any help or pointers are appreciated. I am switching from CrashPlan to Duplicati/OwnCloud for allowing myself and my family to back up remotely to my server.

Is there a way to just tell Duplicati to retry automatically when it fails? It seems like as soon as there is an error, it abandons the backup.

I think the problem is that “something” resets the SSL validation code, and that only gets installed when the backup starts, so once it has been removed it keeps failing. We should fix that.

If you want, you can get a free valid SSL certificate from LetsEncrypt:
https://letsencrypt.org/

Works great so far! New certs installed via certbot and the backup is in full swing – thanks a lot!

But with Windows (7) i can’t establish a connection because of this error. Even with accept-any-ssl-certificate, the same result. Since it works on the QNAP, i hope i can fix it on the Windows client.

But with Windows (7) i can’t establish a connection because of this error.

That sounds like your Windows 7 is missing some updated root certificates.
There is an SO post that sounds just like it with a suggestion for a fix:

Continually getting https Certificate Errors on all browsers