So I’m trying to backup my NAS to another Synology NAS using WebDAV. I have WebDAV Server setup in Synology with ports 10080 (HTTP) and 10443 (HTTPS), Anonymous WebDAV and DavDepthInfinity disabled.

On Duplicati I have setup a backup with that server’s credentials, the path on server I’ve tried “Backup” and “/Backup” which is the shared folder on Synology. The user “backup” has WebDAV Server app permission and Read & Write permissions to the Backup shared folder.

Initially when I press “Test connection” I get this:

Now it gets weird: After that, I try to connect to that same WebDAV server using any client (CarotDAV for example). It works just fine. I can download, upload files with no issues. Now I go back to Duplicati and press that “Test connection” button again and it works! After this, the backup starts but, after a while, I get that same 401 error again before the backup finishes.

As for the options, I have these:

I back up almost all of my machines to Synology using WebDAVS. Mine sounds like it’s configured almost exactly like yours. For what it’s worth, I do not use a leading slash in my backup destination path (in Duplicati). Also, I don’t use that force-digest-authentication option, and I accept the specific hash of the cert on my NAS instead of any hash (that one shouldn’t matter for this issue).

What version of DSM are you using? And what is your TLS Profile level set to? When I was on DSM 6.x I could set it to “Modern compatibility” but after upgrading to DSM 7.x I had to change it to “intermediate”. “Modern” on DSM 7.x seems to break Duplicati using WebDAVS: 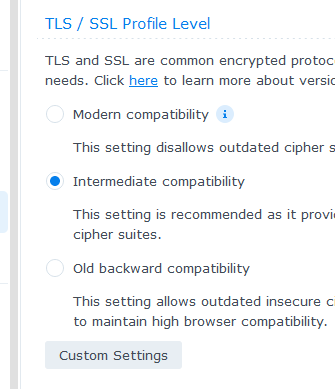 The force-digest-authentication option seems to make no difference.

Well bummer, I’m not sure what your issue is. This config works great from my Windows and Linux systems.