Every time I shut down NAS (Synology) I have to manually start Duplicati service. Can I make it automatic start?

Hi @netkodrugi, welcome to the forum!

I don’t have a Synology box myself but the only reports I recall about it not auto-starting seem related to DSM updates.

However, they may be related to what you’re seeing - does your experience sound like what @drwtsn32 reported?

I have this issue whenever there is a big Synology update. I check the package manager and it usually says Duplicati is NOT running. But if I ssh to the Snynology and “ps ax” I’ll see it running. I kill the process and start it again using the package manager and all is well. (Until the next major update.) I have a feeling it may be a flaw in the Duplicati package design. I don’t have this problem with any other Synology packages.

Oh - and did you do the install on your own or follow a guide (like How to install Duplicati on Synology / DSM)?

I have both issues. After a NAS reboot (which is rare for me), Duplicati just doesn’t automatically start (but no duplicati process is shown in ‘ps ax’). Maybe the root cause is the same - some flaw in the Synology package design for Duplicati?

I believe it used to start automatically on NAS reboot. Maybe a major DSM update led to both issues.

I plan on uninstalling 2.0.3.3 from my NAS and installing the next beta when it comes out to see if either issue is resolved.

I’m curious if you and @netkodrugi are using the similar versions of DSM.

I’ve added a link to this topic in the #howto post just to keep them “related” until we find a solution.

Again, I’ve never used a Synology device before (not for lack of trying!) so am just trying to be a facilitator here but do any of these help?

Once we (well, users like you) crack this I’ll be sure to update the #howto item.

I’ve added a task via Control Panel > Task Scheduler with event = “Boot up” and the user script: /sbin/initctl start pkgctl-Duplicati. 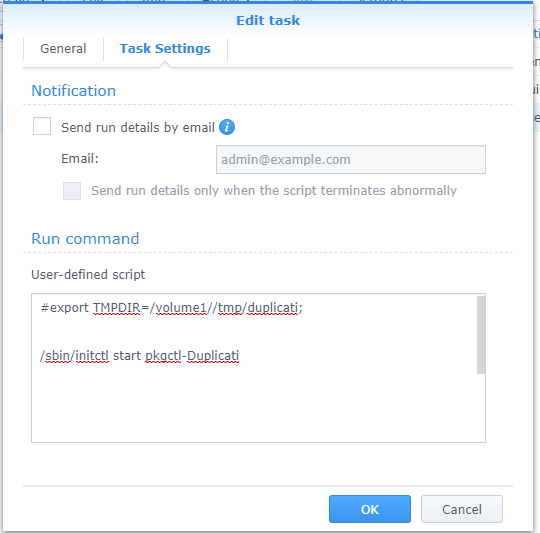 The package center still shows “Duplicati” as not started, but the web interface is running on port 8200. If you get the dreaded “Disk space full at /tmp/…”, un-comment the first line and run them together as one line.

The task scheduled creates the file /etc/init/pkgctl-Duplicati.conf with the details of the job.

The service didn’t start right at boot for me for whatever reason. Maybe for the same reason it doesn’t start on it’s own. I’m assuming it has something to do with starting the mono “service” first, but no idea. I changed my command to the following which worked for me:

I finally upgraded to Mono 5.x from SynoCommunity and Duplicati 2.0.5.1. This startup issue appears to be fixed. I no longer have the scheduled task and it came up on its own. Also the issue with the stop button in Package Center not working has also been fixed which is nice.

Good to know! I really think it was a timing issue with package startup. If Mono wasn’t fully started first, then Duplicati couldn’t start. I’m not very familiar with Synology packages and I’m not sure if they can have startup dependencies.

The “Stop” function in the Synology packaged version was fixed late 2018 but didn’t make it into the beta channel until 2.0.5.1.