I use a script to pass the backup reports to my IRC server:

I read many threads (httpx://forum.duplicati.com/t/duplicati-and-telegram/6282/16, httpx://forum.duplicati.com/t/where-does-script-output-go-to-difference-between-before-and-after/9571, httpx://discourse.linuxserver.io/t/setup-a-run-script-after-in-duplicati/1303/12, httpx://duplicati.readthedocs.io/en/latest/06-advanced-options/#run-script-after) but I can’t figure out how to pass the report to my script.

I use Duplicati with the WUI: 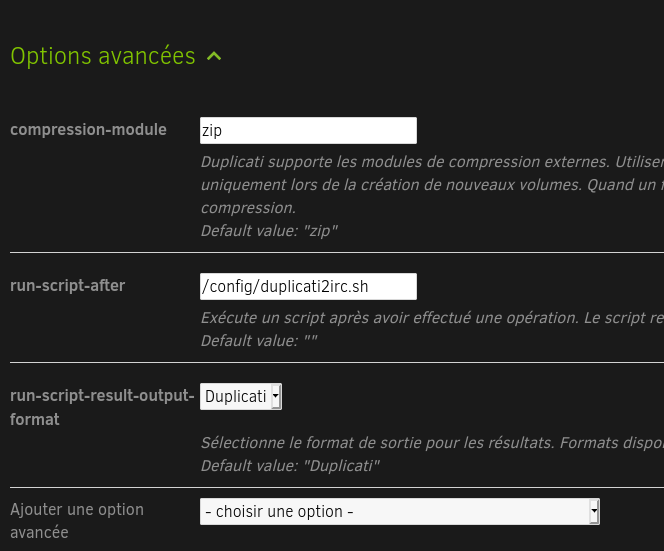 Thanks for any tip.

Made it using a trick. I use “duc” to get logs and pass them to my script.

A command-line tool for controlling remote or local Duplicti servers

Another option for reporting is to use https://www.duplicati-monitoring.com. You use this in conjunction with the --send-http-url Duplicati option, and it gives you a single dashboard for all your Duplicati installs and backup jobs.

Yep read about it but I don’t want to use such a service, I’d prefer self-hosting (saw Github but too much work for my needs atm). And I stil IRC for many logs outputs.

I use “duc” to get logs and pass them to my script.

I don’t use duc, but from source it looks like it has many different logs (as does WUI). Which do you get?

A script run after backup has direct access to a file of results, though I’m not sure what happens on fails.

I wanted every backup report. As said above I tried the --run-script-after but didn’t worked. (cause of Docker I guess)
Anyway I got the logs now.