INTRODUCTION
This HOWTO describes the process of creating a virtual or physical server that is a gateway to the Sia network. Here are some objectives:

DISCLAIMER: This HOWTO describes deployment in a controlled lab environment. Any use outside of such environment is at your own risk and, at a minimum, should consider common-sense security measures which are not the focus of this topic. As always, the 3-2-1 rule applies in backup design. You should have three copies of your data, including production, two of which should reside on different media and at least one of which resides offsite. It may NOT be wise to consider this deployment as your only offsite solution! A wiser choice would probably be to consider it a second offsite solution or even an archive offsite solution that augments your existing 3-2-1 deployment!

OVERVIEW
Here is a high-level diagram of the deployment design: 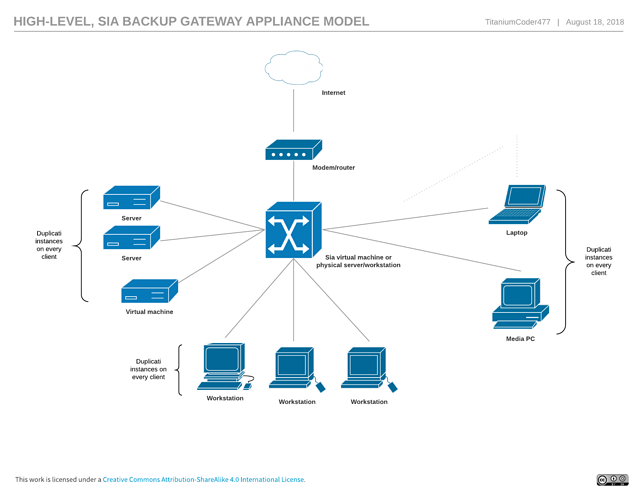 I will list my personal deployment below. Please know that none of this is a recommendation; it is just what I had available to me for testing. You are definitely encouraged to improve upon it with your own design choices!

NOTE: I have not tested this deployment with client machines that run a Windows OS. The reason why this deployment works is because the client machines AND the Sia gateway appliance can all access the /media/cache folder. I am not sure how this would work with Windows OS’s because obviously a CIFS mount will not have the same logical path, i.e. /media/cache, but rather some drive letter such as M:\duplicati-cache. More on this later.

Here is a low-level diagram of my deployment design: 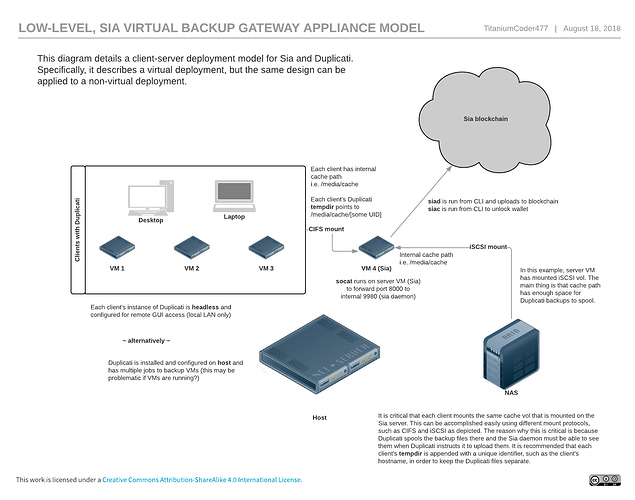 These requirements will be explained in more detail below.

STEPS
This is a rough outline of some steps you could follow to deploy a similar Sia backup gateway appliance. Since most people probably do not have a virtual lab available, I will actually outline the process using spare computers instead.

SIA BACKUP GATEWAY APPLIANCE CONFIG
We’re going to create two mount points, one for the Sia blockchain and our files and one for the Duplicati cache for all our clients. You can see the previous section point 1 for ideas on the volume itself. 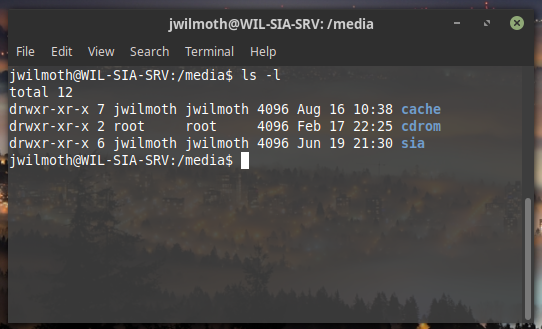 Example: (ignore the different domain name than previous screenshots; I stood up a new VM for cleaner examples)

While the blockchain is downloading, let’s proceed with some additional setup.

The Sia daemon only listens on localhost (i.e. internally) for security reasons. I tried various ways around this, but the solution that proved the best in the end was a simple forward with the socat program.

FYI: If you want to bring either background process to the foreground, just type: fg followed by the number (1 for the siad background process we created in 6 above or 2 for the socat process we created in 8 above). Then if you want to send it to the background again, press CTRL+Z (to suspend it) and then bg followed by the number again. And even BETTER way to handle multiple processes is to use the screen program. But you can look that up and learn how to use it on your own!

Next, we need to setup our Duplicati cache folder and Samba.

Now one last thing on the Sia Backup Gateway Appliance before we proceed to the Duplicati client machines: It is important that the files created in this /media/cache folder are read/writeable for BOTH the user account under which siad is running AND the client machines on which this Samba share will be mounted. The way I handled this was just making sure I was using the same Linux username (jwilmoth) and UID and group (jwilmoth) and GUID. However, you may want to do something different.

NOTE: As mentioned at the first, I have not tested this deployment with client machines that run a Windows OS. The reason why this deployment works is because the client machines AND the Sia gateway appliance can all access the /media/cache folder. I am not sure how this would work with Windows OS’s because obviously a CIFS mount will not have the same logical path, i.e. /media/cache, but rather some drive letter such as M:\duplicati-cache. 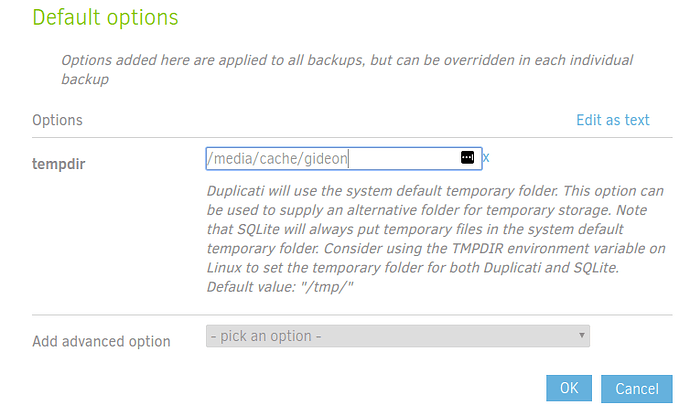 You can repeat steps 1-7 above for each client you wish to backup.

NOTE: I personally run Duplicati on my client machines as a systemd service so that it starts up automatically. I also configure the web UI to be remote accessible so that I can access all the backup software instances from my main computer. It would be awesome to one day have a software or appliance that provides a central pane of glass for multiple Duplicati instances across multiple clients, but I do not know if one exists at this time.

Now it’s time to configure your job! However, remember that we must NOT run the job until the last step. So with this in mind, proceed to setup your jobs as per below.

Name: whatever you want
Encryption: No encryption
The reason why we disable encryption is because Sia already encrypts the data. It is not recommended to double-encrypt it.

Storage Type: Sia Decentralized Cloud
Server: the hostname/DNS name or IP of your Sia gateway appliance and the port 8000 that we setup using socat!
Folder path: if you plan to have multiple jobs, then splice them out into sub-folders; for example: /backups/job1
Server password: leave empty
Minimum redundancy: Choose your setting after reading the explanation below the box; for critical jobs, I set mine to 3 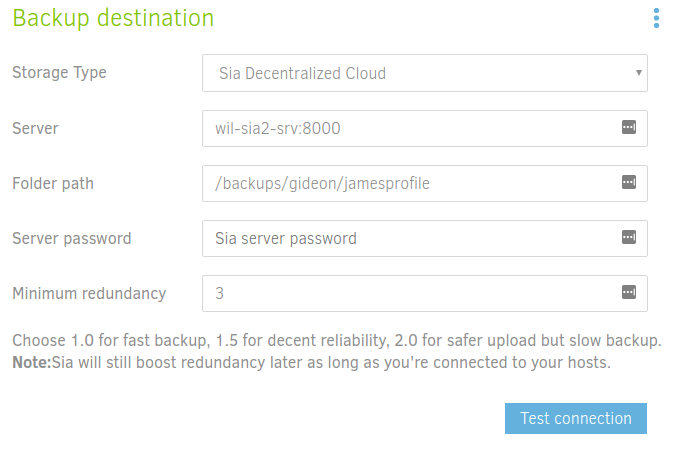 DO NOT RUN THE BACKUP YET!! We still have to make sure the blockchain has been fully downloaded, and you have to unlock your wallet.

(CONT.) SIA BACKUP GATEWAY APPLIANCE CONFIG
Back on the appliance, let’s check the progress of the blockchain download.

Once the blockchain has been fully sync’d, you can proceed below:

Example: ./siac renter setallowance 100SC 1w
If you want to spend a maximum of 100 SiaCoin in a week

At this point, the Sia daemon will start forming contracts for you. This can take one or more hours!

Hi TitaniumCoder477,
Many thanks for this.
I have set up a new VM (Ubuntu 18.04) when I saw your post. I’m currently downloading the blockain again (strange because I pointed to the version I had downloaded a few days ago and it appears to start again).
One question: I’m using Duplicati version 2.0.3.3_beta_2018-04-02. Do you use another version, and is it mandatory - to your knowledge - to use it?
I get in Duplicati in the ‘Backup destination’ page, the error “Failed to connect: Input string was not in a correct format.”
I had an error with socat, it appears I had a space issue. Not sure if I copied it from this ‘how to’ but may be worth knowing for others.
If you have any ideas… in the meantime I’ll wait for the blockchain to finish downloading and will reboot everything afterwords.
Tugdual

Hey tugdualenligne,
I also use Duplicati - 2.0.3.3_beta_2018-04-02. I think I have used others as well with successful results. So I do not think the version is the problem. So you are getting 'Failed to connect: Input string was not in a correct format" error message on the Backup Destination page? Are you using correct IP:port format? (or you can use hostname:port as well) If so, I would suggest first troubleshooting from a network perspective. For instance, make sure your client VM (the one with Duplicati install) can ping same IP or hostname of Sia VM from Terminal. Then, once you verify ping is OK, install nmap as well and run nmap [IP or hostname] to run a port scan against your Sia VM. If socat is running correctly, you should see open port 8000. If you can ping OK and nmap shows port OK but you still get error, then problem is likely socat. Maybe it is not forwarding correctly to internal port 9980. Or, maybe siad is not listening correctly on internal port 9980. 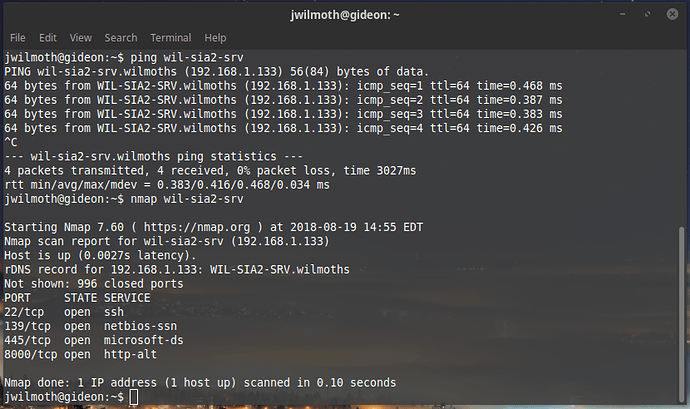 Correct. Port 9980 does not need to be LAN accessible; it only needs to be localhost (127.0.0.1) accessible because the local siad process will need to connect to it. The purpose of socat is to be a running process that takes LAN connections on 9980 and passes them to the siad process listening on 127.0.0.1:9980. So I think you have that setup correctly.

Try running socat under sudo or root. I just noticed that I am running that process under root at the moment, though I seem to recall running it under non-root without a problem too. Let me know if that makes a difference.

Thanks.
I tried running socat under sudo (and I confirm it is run in the Sia VM) but it does not change anything: same error message.
I tried installing another Duplicati instance in the Sia VM to see if direct access ease the thing: unfortunately I have the exact same error message in the Backup destination page: “Failed to connect: Input string was not in a correct format.”
Out of ideas from here

Yours looks essentially the same except for the '=' after sia-password. Not sure if that has anything to do with the problem or not.

TitaniumCoder477,
I know this is crazy but apparently the issue comes from the redundancy parameter: setting it to 2 (instead of 1.5) works! The connection now works. Can’t believe it, to be honest.
However, for one first test job, I’m always thrown errors to repair the database. No matter what I do, it continues…
Error 1:
“Found 3 files that are missing from the remote storage, please run repair” and so on, no repair operation actually cures this

And with this job i got also this error message: “Previous volume not finished, call FinishVolume before starting a new volume”.
Detailed error 3 log is:
" Failed to process path: /sharedfolders/Films/3 hommes à abattre.m4v

All in all, it seems also quite unstable - the siad process crashed several times. I’ve added RAM to the VM: from 1 Gb to 3Gb which is my max). I had another siad crash with this new VM set-up while trying to run a new backup, with error 2 and 3 above.

Glad you found the root issue!

As for the stability, I too experienced instability when using anything less than 8GB of RAM on my Sia VM. I probably didn’t need to give it four cores, but I was also testing concurrent jobs too. The only instability I currently have with it is when my Internet connection is interrupted. It doesn’t like that very much and sometimes requires repairing or rebuilding the database.

My personal opinion is that it should definitely be only a tertiary/archive augmentation to an existing robust backup solution. Or, it should at least be used with data that perhaps one wishes to offload to free up space locally BUT doesn’t really care to lose if that were to happen.

You’re right. My impression nowadays is that it is very far from being a usable solution (not even talking mainstream here)…
Quite disappointed. Will follow the project to see if improvements will come in

Hi guys!
Thanks for this great tutorial.

Has your opinion changed since last Sia updates and seed-based recovery?