Show indicator of status on files

Other programs place an overlay on icons, showing the status of backed up. A little red dot for NOT, a little green dot for IS.

tec805, where are you’re thinking to see these indicators - places I can think of would include:

Crashplan didn’t do anything like this, but before Crashplan I used Mozy (until they shot themselves in the foot by discontinuing their unlimited plan), and in Mozy there was a small indicator on all backed-up files within the Windows file browser itself. It seems like it might be a bit of a chore to recreate (and make cross-platform), but if someone knows a way to do it, and it’s not obtrusive/ugly, I’d possibly be in favor.

I know TortoiseSVN on Windows does this using a TSVNCache.exe process described as “TortoiseSVN status cache” which seems to use various Icon Sets as Overlays to the normal Windows icons.

HOW it does all that I have no idea, but my guess is it involves looking at the contents of the .svn folder (where tracking of file changes is stored) in each checked out repository.

To implement such a thing in Dulicati I assumed we’d have to have “constant” access to the list of files that have been backed up which I guess would mean the local SQLite database.

I know on one of my machines that database is pushing 500M so there might be some performance or memory issues involved in that.

Other than that I don’t see why it couldn’t be done, at least in Windows - I don’t know how (or if) that kind of thing might work in Linux or Mac OS.

I have a program called BackupBuddy that list the option as “Show icon overlays in Windows Explorer”. It places a small green square with a + in the bottom left of all backed up files. Files not backed up have a red dot. This is the single best option of BackupBuddy. I’d much rather use Duplicati as BB has other issues.

Here’s a “scope creep” question if I ever heard one, but IF the Duplicati backup status were shown as an overlay on file icons (and here I’m assuming it would be something like “backed up” or “to be backed up”) would one assume a context menu item would be available to:

HOW it does all that I have no idea

It works by writing a plugin for Explorer, and that is then queried for each file shown in the Explorer. A similar approach is possible for Nautilius (on Linux) and Finder (on macOS).

Perhaps a way to get our feet wet would be a command line tool for linux. Maybe a wrapper around (or basic reimplimentation of) ls that displays a plus next to backed up files or highlights them in cyan or something of the sort.

BackupBuddy is 10MB, last updated in 2012, does this very simply. Green for anything backed up, red for not. I wouldn’t consider it “scope creep” as it’s merely an indicator that the program is doing what it’s supposed to. A gentle reminder for the vast majority of users that never look at logs.

I feel a simple red-green indicator boolean might lead to confusion.

Green is pretty obvious but red just says not backed up with no indicator of why - modified? error? excluded?

Or do excluded files get no icon (in which case a newly added file might appear excluded until it’s first backup gives it an icon).

I feel a simple red-green indicator boolean might lead to confusion.

Agreed. If this someday will be implemented, there should be an option for enabling/disabling it. For users who set up email notifications, check the logs regularly and do a test restore from time to time, icon overlays could be an annoying feature.

Carbonite does it for a billion customers. If they, with their years of experience, have found it to be an useful option (enabled by default) I’d imagine most people would agree. Most people never look at backup information until the day they need to restore something. 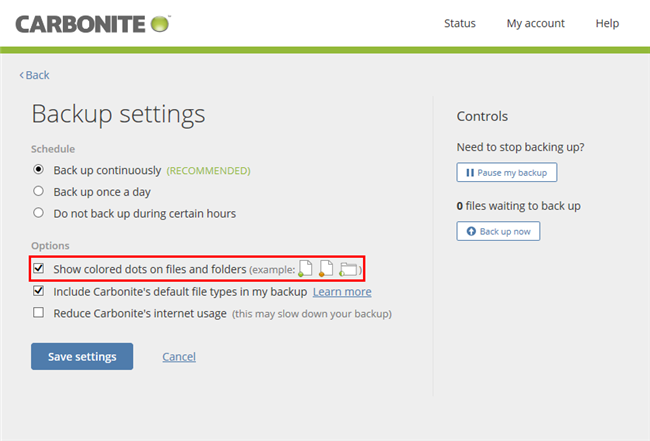 I’m asuming the local SQLite file already contains something like a “last backed up” or “date of file at last backup” date time stamp that would necessary to support this type of overlay.

If so, then it sounds like the only thing needed to make this feature a reality is somebody with the time to code it. Maybe we’ll get a volunteer or two willing to head on over to Github and give it a try.

Carbonite does it for a billion customers

Though it looks like they are using more than

Could you specify which different indicators they use?

I’ve not used Carbonite but it looks to me like they’ve got:

I’m asuming the local SQLite file already contains something like a “last backed up” or “date of file at last backup” date time stamp that would necessary to support this type of overlay.

Yes, this information is in the local database.