Restore files from onedrive-backup which was condensed by rotation

My Problem: I am missing data from a day that was deleted from Duplicati according to rotation rule,

I have a Duplicati setup under Windows with rotation, starting with daily backups, followed by deleting all but one per week. The data backup is on MS-Onedrive, which itself has an Undelete function for files. So I can see and undelete all files deleted by Duplicati in the recent past on Onedrive .
My actions:

Question : How to get Duplicati to take notice of those undeleted daily backups and offer it for recovery.
Any Idea ?

Welcome to the forum @Sonteru

Is rotation rule something you invented (if so, what is it?), or do you mean retention on Options screen? 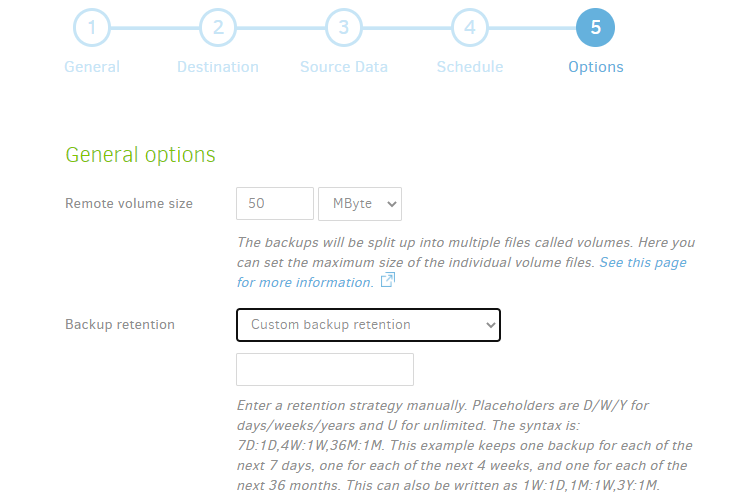 “RECREATE” function. But it does not re-introduce those days back

Did you look at the file names that you put back? There should have been some with dates in filename.
I would have expected one version in Restore dropdown for every dlist file. Timestamp on file is UTC.

Indeed, its called “RETENTION” in Duplicati

What I think should happen when a version is deleted by retention is the database data for the version is deleted, and the destination dlist file is deleted. If it actually was saved by OneDrive, you could reverse above process (though it’s not really recommended and may have some ill effects) by restoring the dlist having the desired date (do you have such a dlist?) along with more recently deleted files. You might get duplicated block information if some of the files were from Compacting files at the backend, but I’d guess there’d not be an immediate problem from that. Main thing is – do you have the dlist from desired time?

Yes, now I found the missing dlist files in the OneDrive recycle bin under all those other files. I undeleted those. Then I could “RECREATE” the Duplicati calendar of available backups and “RESTORE” the desired date.
Thanks for help.