Thanks for the update!

As a point of clarification, the new --exclude-empty-folders Advanced option is described as the following which, to me, is a bit unclear as to whether it EXCLUDES them from being backed up or REMOVES them from an existing backup / version.

--exclude-empty-folders
Use this option to remove all empty folders from a backup.
Default value: “false”

Functionally, as a checkbox I’m assuming it simply excludes them from being backed up.

I don’t know if it’s the update or my system but I found that on the two machines I’ve in-GUI updated so far:

a bit unclear as to whether it EXCLUDES them from being backed up or REMOVES them from an existing backup / version.

It excludes them from future backups. It never changes existing stuff.

I have seen reports of this, but unfortunately it is hard to debug the updater, so I am not sure exactly what happens.

FWIW, my work laptop regularly behaves this way when using the in-GUI updater (i’m using the vanilla install, not running as a service) - I always have to manually restart Duplicati after the install, though after that everything’s fine.

master progress bar at the top of the index.html is no longer updated, no speed indication nor number of remaining files. Try to figure it out myself, but if someone can step in

I would be happy.

Seems to be a “cosmetic error” because backing up and restoring files work great so far!

With a full screen window I just see a left justified job name and a right justified ": ". When the deleting remove files and verifying files steps happen I start seeing the green background on the progress bar.

I tried resizing the window and the expected file count stats appeared. 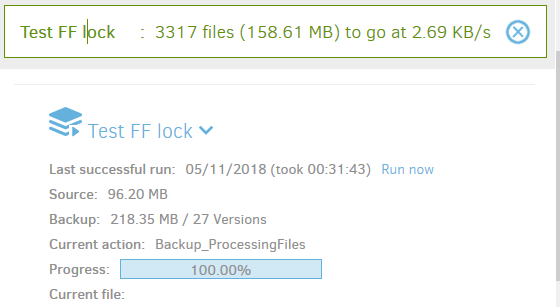 A few questions about some of the updates:

Regarding point 2. Yes, that should fix the issue.

you guys have been really busy. Keep up the good work, it is greatly appreciated.