A simple question: where do I find some documentation on using Rclone backend?

And you use those in the duplicati configuration: local is my local filesystem, OD4B is onedrive. 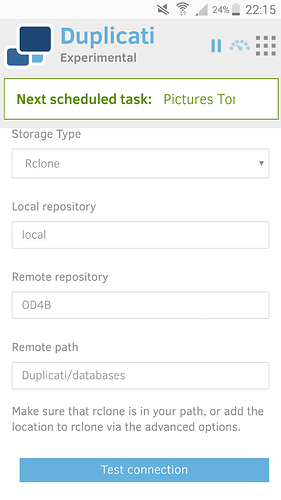 You can set additional options, eg the path to the rclone executable if that’s not in your path.

Thanks for the explanations, but I still don’t understand very well. It is worth mentioning that I’ve been using Rclone for quite some time.

Rclone has several commands (sync, copy, mount, etc). What exactly is Duplicati doing in this example? Synchronizing between “local” and “OD4B”?

It’s not syncing as duplicati deletes the files it created after upload. It uses the copyto command to upload files.

But then what is the advantage of using Rclone as a backend? Could Duplicati not make the copy directly? Is it just to use the configuration of Rclone’s storages?

That’s indeed the reason I added it. Whatever backend is available in rclone is available in duplicati. I personally had problems with the duplicati one drive backend. Adding rclone solved it for me.

personally had problems with the duplicati one drive backend

Yes, MS has upgrade their API so we need to rewrite the backend.

Indeed, and my C# skillsets (as in “not-existing”) to review the onedrive implementation were way to limited … Adding rclone seemed much simpler

FYI: rclone is also updating its Onedrive implementation. Anyone working on the Microsoft Graph API here might have a look at the topics over at rclone, as there seems to be something going on with the API creating 2 versions hence twice the storage for each file uploaded.

That’s indeed the reason I added it. Whatever backend is available in rclone is available in duplicati. I personally had problems with the duplicati one drive backend. Adding rclone solved it for m

But does it save data as chunks or plain files when using the rclone as a backend?

All backends save the same data chunks. The only difference is how they upload those chunks