Hi. recently i installed the duplicati plugin for open media vault. i just made a backup. i disabled encryption. and i enabled zip_compression (level 5) now its backing up but its really slow. the source drive is an internal sata 2 5400 HDD and the destination hdd is the same. however i dont think that is a valid reason for it to hit less than 10 KB/s . i can get 6-7 MBps out of the destination HDD using SMB on windows. how can i fix this slow transfer issue?

Deduplication can be CPU-intensive. What kind of hardware is running your Open Media Vault? What is the processor and RAM configuration?

well, its a netbook actually. CPU : intel atom runing at 1.66 GHz. 1 core + 1 vcore. MEMORY : 1 GB ddr2
i noticed you said “deduplication” however this was my first run. there was nothing on the target drive that was simillar to the source drive.
more info about the cpu : Intel Atom® Processor N450 (512K Cache, 1.66 GHz) Product Specifications

Deduplication always happens - even on the first backup. Can you check CPU usage during the backup job to see if it is maxed out? 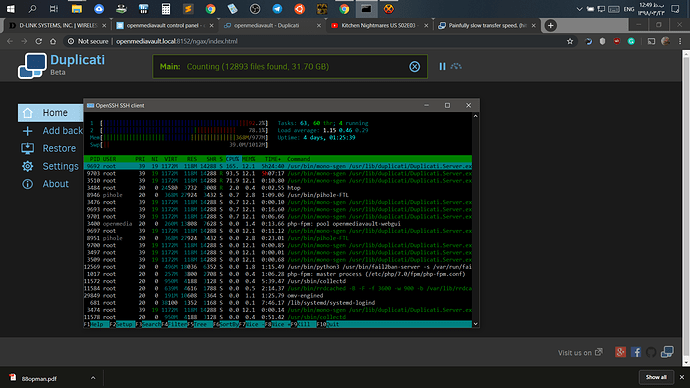 So this is normal? due to the CPU being weaker than a raspberry PI?

I would think so, but I’m not an expert when it comes to Duplicati on low powered machines. Hopefully someone else has some advice…