Was a crashplan and previous duplicati 1.3.4 user. After the demise of crashplan did the dive into the ‘beta’ version. So far still testing out but really appreciate the new cloud services supported.

Something weird though - seems other cloud providers work ok but for Box.com - I end up getting strange error messages (“Got 0 warnings”).

Screenshot and some logs I could see provided. Anybody have insights why this is happening? 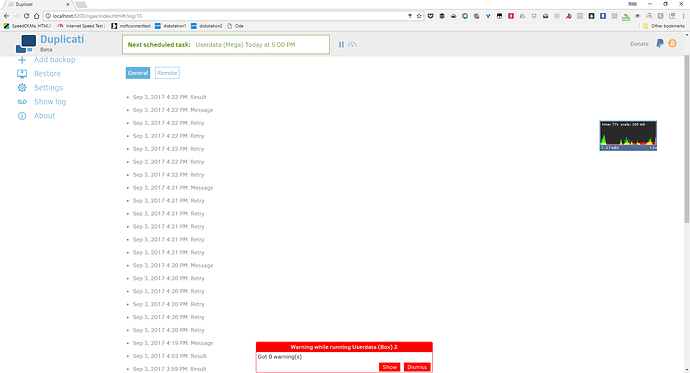 Something weird though - seems other cloud providers work ok but for Box.com - I end up getting strange error messages (“Got 0 warnings”).

I am getting the same error messages and will investigate why it happens.

Any luck finding out about that “The requested file does not exist” error (and resulting “Got 0 warning(s)” message) associated with Box.com?

I ask because I’m getting the same thing on a test backup, even though I confirmed the file actually exists.

Any luck finding out about that “The requested file does not exist” error (and resulting “Got 0 warning(s)” message) associated with Box.com?

No, I did not get to test it. Too much stuff happening

Just to be sure and not to waste time on more investigation: box.com can still not be used as a backup target without getting this errors?

I get the same errors. Files exists. So I just ignore it and will not use box.

Any news here on this error?

Not from my end. My experience with it was just with a test backup which has since gone away (forgot to save it before wiping a machine).

Knowing more about Duplicati now than I did back then my guess is that there’s either a bug in how box.com reports (via their API) files or a race condition such that a file recently uploaded to them isn’t reported (via their API) as existing if queried too soon after creation.

Since mine was very small test backup I believe I had a single archive (dblock) and “what’s-been-backed-up” (dlist) file set created. This meant that the automatic “test a single random archive file” step Duplicati does after a backup had to choose the only file that existed (and in this case was recently uploaded).

Do you know how many dblock files you have at your destination?

If I (or you) were to test this theory, some things to try out would include:

If any (or most) of the above are “yes” then it’s most likely a race condition (Duplicati is asking for the file list faster than the destination is able to provide an up-to-date one).

@kenkendk, what do you think of retiring --no-backend-verification and replacing it with something like --backend-validation=before|after|none?

I used to have the box.com error but have noticed it hasnt come up for a while. So perhaps the theory is right (but take with a grain of salt since all anecdotal and not really scientifically tested)

Thanks for the follow-up!

I had also problems with box.com. Every backup reported an error.
Then I changed from “box.com” to “webdav” and now it works without this errors?!?

Maybe you will try it with webdav?

Settings: Use SSL, dav.box.com, 443, /dav/duplicati [after /dav/ you can choose your folder]

Disadvantage is that you have to use user+password instead of the apikey.

Thanks for the suggestion @thommyX!

I could have sworn I saw another post where somebody else reported using WebDAV worked better for them than the box.com API as well, but I can’t seem to find it now.

That would have been me. And yes webdav works better and faster as well if I recall correctly

Is it possible that box.com is no longer usabel in Duplicati? Can anyone post if he/she has the same problems or if it works?

Have a complete empty box.com free account.
Setup a new Backup in Duplicati - tried both webdav (SSL, dav.box.com:443 and path /dav/duplicati) and box.com with API key

I use Duplicati beta from Nov. Error is the same in both setups

tried both webdav (SSL, dav.box.com:443 and path /dav/duplicati) and box.com with API key

Can anyone post if he/she has the same problems or if it works?

What OS are you using? If you’re on an old one such as Windows 7, this might be TLS versions:

On Windows, see if Internet Explorer can get to https://update.box.com and https://dav.box.com.

Internet options --> Advanced has some TLS checkboxes you can test to see what your OS has.

–allowed-ssl-options is Duplicati’s control. If your OS can do newer TLS, this is how to ask for it.

Update - WebDAV Support is also a warning to any Box WebDAV users. Service may end soon:

Setting the allowed-ssl-options to Version 1.1 did the job! Thank you!