I’m running Duplicati 2.0.3.3_beta with a normal local directory: the documents folder (Windows 8.1). As I have a big Veracrypt-file in this directory (about 20GB) I exclude it in two ways:

Btw, this happened already in April (see time-stamp), but a rerun does not solve the problem.

Can you post the filter that you’re using to exclude the file?

Is the 2017CLFinal.mpg file your Veracrypt file (meaning you’re using a custom extension rather than .hc or .tc) or do you just happen to get that warning when trying to exclude the Veracrypt file?

My GUESS is that you’re running the backup while the Veracrypt file is in use and you are not using VSS snapshots, so when Duplicati tries to get the size of the file it can’t (because it’s in use) so it doesn’t get excluded by the size filter and then it tries to back it up but can’t because, well, it’s still in use.

If that sounds like it might be what’s going on, one possible way to test this would be to make sure you’ve unmounted the Veracrypt drive before running Duplicati.

Hi,
Yes, the 2017CLFinal.mpg is a Veracrypt file and it is in use when I run Duplicati. That’s why I want to exclude it. (and I don’t need it in my Duplicati backup).

I don’t know where to specify VSS snapshots running Duplicati - I never touched that.

For the filter see my screenshot please.

Update:
In order to proceed (and as a rather bad bypass of the original problem) I created a completely new backup (with a new destination directory, but the same filters). Here I get an error after some hours of running the backup (yes, the source folder is a rather big one): 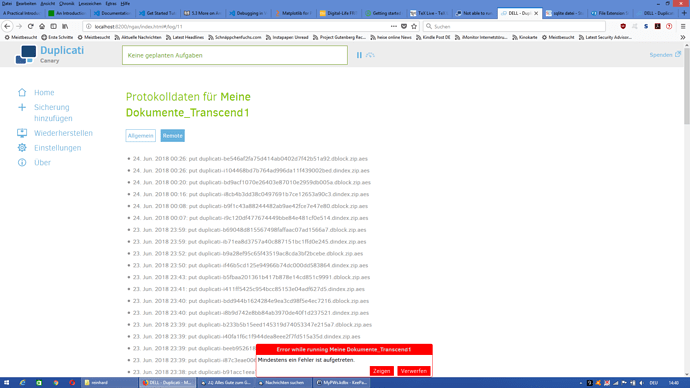 I created a completely new backup (with a new destination directory, but the same filters). Here I get an error after some hours of running the backup (yes, the source folder is a rather big one)

That’s odd - I would have expected the same filters to cause the error immediately.

Since we know an error has occurred it should be visible in either the job General (Allgemein) log or, more likely, the global “Stored” log (main menu “About” -> “Show log”.

Update:
I looked into the global log but the error messages there didn’t shed much light on the problem. So as a last resort I removed the big file from the directory, I removed the filter afterwards and created a backup successfully.
So in my case filters don’t work as expected - I don’t know why. But I’ve got a backup now and that’s the most important thing.

I’ve got a backup now and that’s the most important thing.

Agreed, I’m sorry the filters weren’t working as expected for you.

Are you planning to put the large file back into your Duplicati source folder at some point (meaning we should dig into this more) or are you OK with what you’ve already done to resolve your issue (meaning we’ll just make note of this in case it happens again to somebody else)?