I have the following errors on backup -
-Found 1 files that are missing from the remote storage, please run repair
-Missing file: duplicati-b558790e6cf84462fabb8ae9f48a314c5.dblock.zip.aes 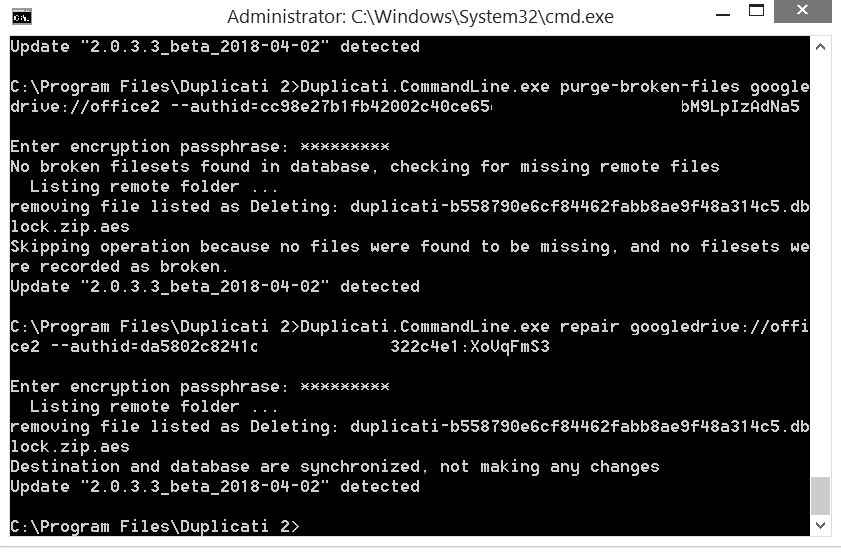 I think you have fallen into a failure scenario that we haven’t pinned down yet.

The first screenshot makes me think that Duplicati decided the duplicati-b558790e6cf84462fabb8ae9f48a314c5.dblock.zip.aes could be removed (perhaps due to --retention-policy rules) and deleted it from the destination but did NOT get it removed from it’s local database.

On your next run, the file is considered “missing” so won’t start.

The purge-broken-files command doesn’t detect the file as missing so doesn’t actually do anything to fix the issue.

Normally a “delete and recreate” would rebuild he database solely from what files it finds at the destination, but in your case I think there is a dindex file still referencing the actually missing dblock file, so when the rebuild happens (based on the dindex and dlist files only) it is rebuild still in the “broken” state.

Can you create a dummy duplicati-b558790e6cf84462fabb8ae9f48a314c5.dblock.zip.aes at the destination for Duplicati to find and delete?

The next alternative would be to either delete (or better yet move somewhere else) the dindex file associated with the missing dblock file (or move ALL the dindex files) and try a recreate again. This will force Duplicati to use the ACTUAL found dblock files instead of just the index files.

@kenkendk - is there currently a way to run a check of dindex-to-dblock files to isolate issues such as this one?

Just reading this now, looks like there is some similarity with my issue.