Trying to configure Duplicati 4.0.5.1 on a user’s Windows 10 computer, I ran into this error: 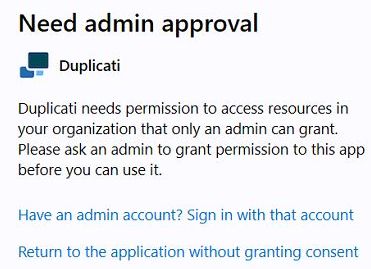 Can anyone explain how to resolve this?

The user is admin of her own computer, so it can’t be related to that.

I believe she used Duplicati before. Another post mentioned clearing the authID, but I could not find any details on how to do that.

Your wisdom will be highly appreciated!

I ran into this error

Where in the configuration process did that happen? Google search on the message led me to this:

which looks like it would happen while getting a Duplicati AuthID on a Microsoft webpage sequence.

Does this seem plausible so far? What Storage Type is being used? Is it something from Microsoft?

The user is admin of her own computer, so it can’t be related to that.

The theory here is that they’re talking about an admin of the remote cloud. Is there a known admin?

Permissions and consent in the Microsoft identity platform endpoint is a more technical piece on this.

Thank you for replying, ts678.

The error message pops up on the Destination screen, after clicking on AuthID and entering the user’s credentials.

You can observe the credentials are entered at a URL starting at
https://login.microsoftonline.com/common/oauth2/v2.0/authorize
Duplicati does not handle credentials, but stores OAuth 2 tokens.

How we get along with OAuth gives details of the basic approach.

I don’t understand. You said “Trying to configure”. Was backup configured previously, or what?
Multiple backup jobs can use the same AuthID as far as I know. Just copy it, and paste to new.
Duplicati OAuth Handler has “Click here if you need to revoke a previously established authid”.
Typically there’s also a way to invalidate from the cloud service end. Continuing to create new
AuthIDs may eventually force some old ones to become invalid, as services may have limits…

Thanks, I’ll have a look at that authorize page.

Yes, Duplicati was configured before, but because she had bad internet at the time, we decided to backup to hard drive instead. We deleted her ODv2 config at the time.

But now that she has fiber internet, we want to backup to OneDrive v2 again.

Thanks for the tip. I’ll see if I can find a way to invalidate the previous authid on the cloud.

For completeness sake, an update:

Our head office clamped down on O365 app permissions, which caused Duplicati backups to fail for all new users. (It continued to work for users who configured Duplicati before the clamp-down.) They are now working on giving Duplicati permissions again.