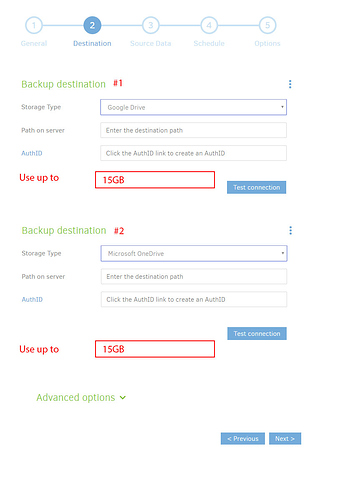 I have a backup that’s roughly 20GB, I want to store about 15GB of it at google drive, and the remaining 5GB on Microsoft OneDrive

What you are describing has been discussed (a while ago) in the sense of “pooling” multiple cloud destinations to be used as a “single” destination.

At the moment most development focus is on improving stability and performance, so I’m afraid a feature like you describe is low on the to-do list.

However, as an open source project if you (or others you know) are interested in adding the feature yourselves feel free to check out the code at Duplicati’s GitHub page.

Alternatively, you could add an “Issue” on the GitHub Issues page describing how you think this feature should work and maybe add a bounty for that feature at Bountysource to entice other programmers to look into it.

If enough other people like the idea and add to the bounty somebody is likely to take a crack at it.

OK thanks. Stability and performance are definitely more important. I love the project and I think it’s great that there’s an open source implementation of incremental cloud backup. Pooling multiple destinations would be nice to have, especially for users who may have multiple cost-free cloud spaces but would like to use them collectively for backup with Duplicati. But it sounds like it’s more of a wish-list item at this point, and maybe it’s something to revisit down the road. In the mean time I’ll keep your suggestions in mind. Thanks again.

Thanks for the support!

(Oh, I updated the title of this topic so it’s a little more clear what we’re talking about - I hope you don’t mind.)

Disclaimer - this is not an endorsement or suggestion regarding the tools mentioned below!

Note that I vaguely recall some talk about third party tools (such as StableBit CloudDrive + StableBit DrivePool) that can make pooled cloud drives look like a single local drive. While this sort of setup wouldn’t necessarily be the best performance wise, in theory as long as the pool looks like a drive to Duplicati it should work just fine (though it may not be speedy).

There is also a backup tool I just came across (so know NOTHING else about it) that seems to natively support cloud pooling (as well as cloud-to-cloud backup) called CloudBacko (How to combine multiple Google Drive and OneDrive accounts into a big pool of storage – CloudBacko Blog).

That’s great info, thanks. I checked out the applications you mentioned, CloudBacko does exactly what I was describing and CloudDrive + DrivePool would probably accomplish something similar with a bit of effort. Those software titles are not free and open source, so unfortunately they won’t work for me because I couldn’t deploy them on a wide scale, but it’s great to know someone is thinking about the same problems. I’d definitely be willing to contribute some money to add the pooling function to Duplicati at the point where it’s a feasible feature to add. Thanks again.