I have problems with a backup to a WebDAV server.
The backup process runs fine according to the log, but at the end there is always the error that all files on the remote storage are missing, although they are definitely there. If I start the backup again, the same error occurs. Repairing the database as suggested does not work.
The connection to the server (older Synology Diskstation with DSM 5.2) is done via an OpenVPN connection. Since I use Docker, the duplicati container is redirected over the network of an OpenVPN container. Duplicati can also reach the server through it and I can do a successful connection test in the 2nd step of the configuration. During the backup the connection was not interrupted according to the VPN log.
If I run the backup again from the command line, the process ends with the exit code 100 which means that the server cannot be reached. But if I delete the database on duplicati side and start the backup again, the backup process is started directly until the error occurs in the end.
I have already tried to shrink the backup and change the chunk size. But every time the same error comes.
I have also configured several other backups to another WebDAV server that can be reached without VPN. That way the error never occurred. All backups are AES-256 encrypted.

Does your WebDAV server restrict the ability to list files for the authenticated user?

Is there a way to see or test this? I can log in the DSM WebUI with this account and can see all files from the backup.

I’ve never used DSM 5.x, but I have a NAS running DSM 6.2 and I do use WebDAV. I can see permissions using File Station. Here’s what my permissions are set to on the WebDAV target: 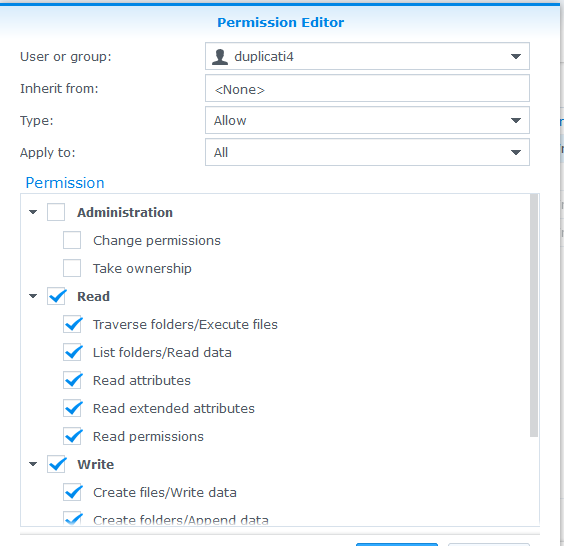 Basically it’s full read and write. If your permissions didn’t allow the List folders permission, for instance, it might cause the problem you’re seeing.

The folder was already set to full r/w for my user in DSM. I tried to set the permission to custom and then activated all Read and Write checkboxes again, but still the same error.

733 Files missing at the remote locations but all are there might be worth a try. Try experiments with slashes. Duplicati.CommandLine.BackendTool.exe is an easy way to test a list using same URL that backup would.

Finally found what was causing the error. In DSM under Control Panel/Shared Folder/Edit/Advanced Disable directory browsing was enabled. Other shares do not have this option enabled so I was able to test list with these shared folders. Unfortunately I could’t get the accept-any-ssl-certificate option to work with the BackendTool and had to disable SSL for the test.
Is there a way to test all needed backend operations in the Web-UI? I found it a bit irritating that the connection test showed no errors where in fact a basic function like list was forbidden on the remote storage.

Duplicati.CommandLine.BackendTester.exe (CLI) does a more thorough test for all basic operations.

The “Test connection” button in the GUI is a minimal connectivity test that, interestingly, does a list.
Result can be an empty list, which is exactly right for a new backup. I wonder if your system did that?
You could possibly test a third-party WebDAV client to see if it also successfully shows no files seen.

A feature request in either the forum or GitHub Issues to at least sanity-check more basics might help, however there are a huge number of feature requests, and progress on them needs more volunteers.