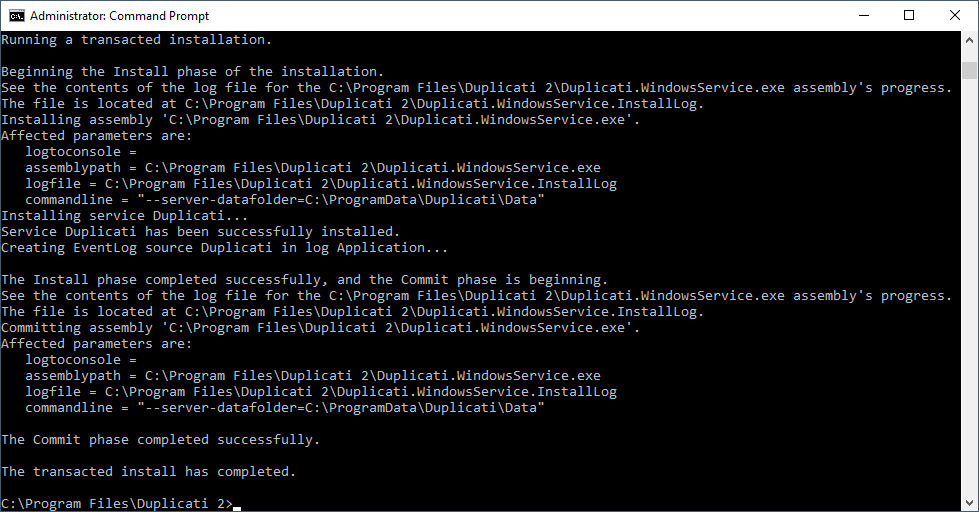 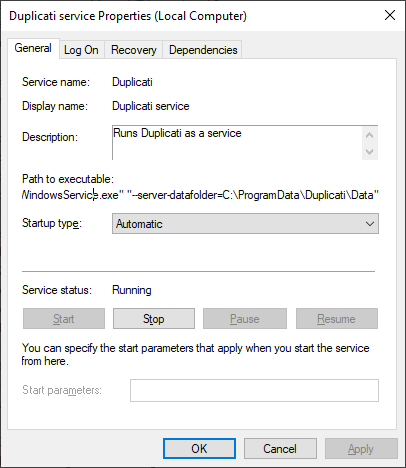 The guide works perfectly but I did notice a small issue that may affect some users.

When moving my existing backup sets that contained selections in the User data folders section they will need to be updated to use the full path in the Computer section to get to that users data instead.

This should be expected but I had overlooked it, now that Duplicati is running as under the local system account those selections are no longer valid and you will get an error when trying to run the job something about %documents% not being found or valid (sorry didn’t get a screen cap).

Before the change I was backing up my Desktop and Documents folders as shown in image 1. 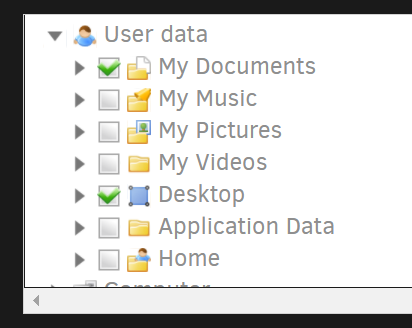 Now that Duplicati is running as a service I need to specify my Desktop and Documents folders via full path in the Computer section as shown in image 2. Notice how the User data now only contains Application Data and Home and neither contain anything of use. 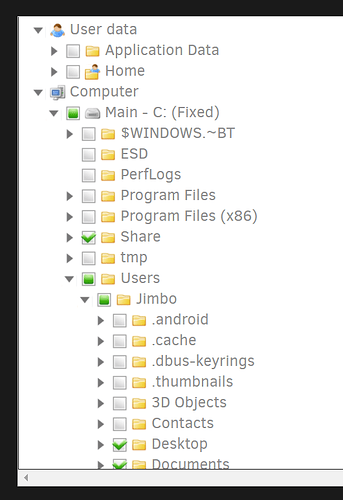 The next time the backup runs it will take a bit longer than usual while it figures out that nothings really changed but it still has to do some housecleaning on the paths.

I also renamed the Duplicati folder in my user profile to C:\Users\Jimbo\AppData\Local\DuplicaiOld so I don’t accidentally launch the “old” tray config (which will now run @ 8300) but that is totally optional and will be deleted once I’m confident I’ve update all my trayicon shortcuts.

Adding the --no-hosted-server to the tray icon worked like a charm for me, don’t forget to update the shortcut on the Start Menu, right-click More, click Open File Location. In the window that opens right-click on the Duplicati 2 icon and add the --no-hosted-server to the end of the target path. Can also be found directly via C:\ProgramData\Microsoft\Windows\Start Menu\Programs

My power shell script still runs jobs like it should and VSS is now working so I’m really quite pleased, thanks again.

3 Likes
Schedule not running backups after starting the PC
Relocation of appdata files
Alk September 3, 2022, 1:24am #59

If you use the Tray Icon and have password protection on the web user interface, then you will need to add additional parameters to the Tray Icon shortcut for it to work, after migrating Duplicati to a service.

Open the folder: C:\ProgramData\Microsoft\Windows\Start Menu\Programs\StartUp
Right-click the ‘Duplicati 2’ Shortcut → Properties → Remove what is currently in the ‘Target’ field and replace it with (adjust the path accordingly between the quotes of --server-datafolder=“”):

So, for example, in the latest instructions in post 46 from @johnvk , the Duplicati Data Folder is now at “C:\ProgramData\Duplicati\Data” (where the sqlite files now are), so the ‘Target’ field of the ‘Duplicati 2’ shortcut should be:

Furthermore, as @JimboJones points out, in the same way, don’t forget to also correct the (actual) Start Menu shortcut in the folder of: C:\ProgramData\Microsoft\Windows\Start Menu\Programs (scroll to find it in there!)
…and you may also find a shortcut on your Desktop, which also requires correcting in the same way (located in: C:\Users\Public\Desktop).

(Thanks to @kees-z for originally posting the shortcut fix and also to @johnvk for the service migration instructions).