Currently it is possible in the duplicati I keep the original file name?
The prefix option I managed to remove but I wish it did not zip too.
Example: Name of test.txt file, it keep this name and not true-bd948998250ae401ab7bfce9e52820f20.dblock.zip
I’m integrating with Backblaze Cloud B2.
Thanks for the feedback. 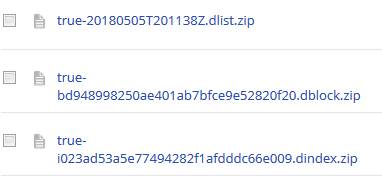 I believe that what you want is not possible. In the official documentation it cites that the large files are divided into smaller compressed files and only Duplicati can access the data to restore.

thanks for the feedback, fernando

@fernandorogerio is correct that as part of it’s deduplication process Duplicati chops files up into small blocks (100KB by default) then compresses those into zip files (50MB by default), so attempting to keep original names for blocks or zip files isn’t really possible.

For the record this isn’t exactly correct as there is a stand alone Python script that restore from Duplicati 2 zip files.

A Python script is available that can restore files from a Duplicati backup, without using any code from Duplicati:

thanks for the feedback

There are other backup programs which store each file independently on the back end. Cloudberry Desktop Backup comes to mind. Because it does this, there is no deduplication across files.

Edit to add - default behavior is for filenames on the back end to be the same as normal storage. However there is an option to encrypt filenames, but it sounds like you wouldn’t want that.

There are a few others with this working too, goodsync, syncovery, rclone. Do you use some with free graphical interface similar to duplicati, for recommendations?

This is very important information for a beginner in Duplicati like me. Thank you.