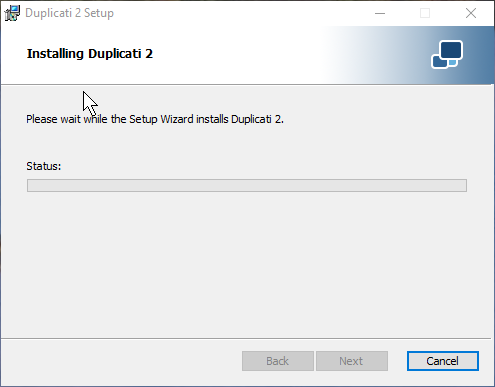 After about an hour the installer responded. And I was able to install Duplicati

Hi @Berk15 and welcome to the forum.

This doesn’t appear to be a common problem. Would you be interested in trying again or chasing theories?

Although an hour seems long, it sounds like Windows cannot install two .msi files at the same time, and that sometimes it really means install (as opposed to putting up the initial screen) i.e. it hangs where yours hung.

Here is a post from an installer that Duplicati does not use, and here is Microsoft info and how to see events.

If it turns out there’s nothing much in the event log and the problem isn’t reproducible, it might stay unknown.

Not a lot of information I’m afraid

Google Translate gave me the message in English as: Can not connect to the server. Error: 0x8007043C

might be the English version often seen in search, but even if I boil it down to language-independent parts, nothing much comes up that’s a clear cause or cure (some web sites DID offer to sell me the claimed cure).

at least wasn’t peddling fixes, so contributions may be less biased. Maybe some service down. Safe mode?

No nothing familiar. I was running normal mode. I had some issues with removing a file earlier on the day and I started a diagcab from Microsoft ( wich fixed that isssue) but I can’t think of anything else out of the ordinary. The installer went well on an update today, so I think it’s one of the many mysteries in todays computing

In my experience this appears to be the point at which it requests admin permission (UAC) to continue the install. It can pause before asking the UAC question for a long time on some computers - Duplicati isn’t the only installer suffering from this. If you experience this, try running the installation with Administrator permissions from the start and see if it bypasses the problem.

I thought the same so I already experimented with it. It did not make a difference. Since the latest update of windows the problem did not occur. So fingers crossed

Thanks for the update