How to install Duplicati on Synology / DSM

Sorry for not asking earlier (or missing it if already provided) but what versions of Duplicati and DSM are you using?

Thanks - how about the Synology DSM version? Maybe there’s something in a version of that that doesn’t play well with Duplicati.

For the DS211j I found that Duplicati didn’t work reliably. Roughly half of the connection attempts with B2 cloud storage failed due to HTTP errors. When a connection did work, starting a backup run already took minutes – that was before the first file started transferring. Lack of space on /tmp further complicated matters. The latter problem could likely have been resolved with some effort. The former couldn’t. I concluded that the DS211j is likely too slow to run Mono/Duplicati.

My attempt with the DS218+ fared much better. Installation was smooth, and I had the first backup running with little effort.

Hi @Random, welcome to the forum!

Can you tell if the connection lost message coming from a Duplicati page or DSM one?

If the Duplicati server is starting then crashing there should be a lot file recoding the error, but in not sure where it would be located on you machine.

I’ve got a “baby” DiskStation - a DS115j - but it’s got 3TB of storage available (I just cleaned out the junk last night). I just lost of bunch of personal data to a drive with a corrupted filesystem, and despite knowing better, I didn’t have a backup system in place. I’m running Manjaro (Arch) LInux, and I’m a developer. Thankfully, I regularly push my code to GitHub, so I can get that stuff back. What’s gone is all my pictures, music, settings, etc. Argh.

It’s really surprising to me that Synology doesn’t have a backup “backend” program that supports Linux. I’m going to keep reading the site (and studying this thread more carefully), but I hope there’s something better than having to manually schedule rsync or rdiff runs myself.

Has anyone tried putting a Linux backup server instance inside a Docker container on a NAS? That thought came to mind, but I’m not a Docker guy, so I’d have some learning to do.

When I’m in Package Manager I see Duplicati… it’s button says “Run” or “Uninstall”. I select run, and after a few seconds the button shows “run” again, instead of stop.

When I use the Duplicati icon (on the installed package dropdown (from DSM in browser tab), a Duplicati window appears with the “connection to the server is lost” message and then a countdown to the next connection attempt is displayed. I doubt there ever was a connection since the Run button is always present in Package Center.

UPDATE: After rebooting the NAS, I can now start Duplicati. Initially there was a popup that said Missing XSRF token, but that is now gone. So… off to experiment…

A post was split to a new topic: Restore bug on Synology if path has spaces

Has anyone tried putting a Linux backup server instance inside a Docker container on a NAS?

Hi @bundito, welcome to the forum! Sorry to hear about your data loss.

If you are asking about running Duplicati in a Docker container then yes, that’s doable (at least it with for me). I use it to back up my unRAID NAS files to an off-site location.

If you’re wanting to run Duplicati on your Synology box you may find using their package easier to with with than a Docker container.

Of course, there’s no reason you can’t try out both and see which to prefer - just don’t try to share the same destination folder.

A post was split to a new topic: Connection issue on Synology

Installed Duplicati followed by Mono, and did not work. 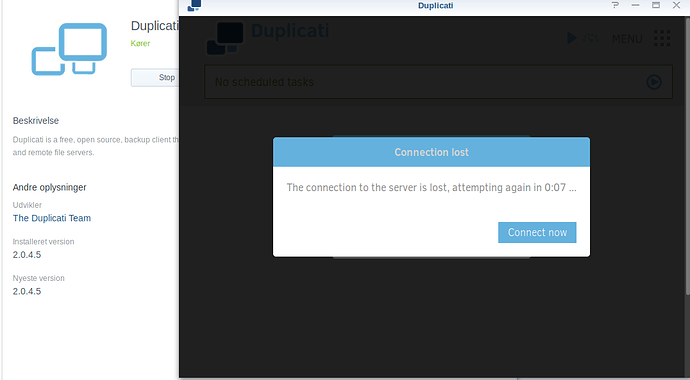 Tried the other way around too (Removed Duplicati, and installed it again - where Mono was present and running on the system). Restarted the system to give it another chance, but same results.

Have you tried the workaround I posted in this thread?

Just to flesh this out a bit, does anybody know Synology paths to the Duplicati folders (like for doing a downgrade) or do DSM package not work that way?

Also, have any of you tried uninstalling Duplicati and, if so, were they any left over files needing manual cleanup?

Just to flesh this out a bit, does anybody know Synology paths to the Duplicati folders (like for doing a downgrade) or do DSM package not work that way?

The default location for databases seems to be /root/.config/Duplicati

I ended up redirecting this (by using a symlink) to my 16TB NAS disk volume, as root is only 2.3GB on my NAS.

I could have sworn there was a server parameter to let you specify the “home” folder (as an alternative to a symlink), but I can’t seem to find it now.

I could have sworn there was a server parameter to let you specify the “home” folder (as an alternative to a symlink), but I can’t seem to find it now.

On regular Linux there is - you can just modify /etc/default/duplicati. But Synology doesn’t seem to have that equivalent. Symlink seems to work OK for me.

Did you follow the step 3) in the install guide above? The message you see is exactly the symptom if you did not add your user to http group.