[HELP] Root NAS drive its full, no space at all since install duplicati

I have a big problem, a couple of days ago I installed duplicati on Openmediavault NAS as docker and I have been configuring it and I already have the folders and everything… today I had a problem and it is that when making the backup of the /docker folder of my openmediavault I got an error in duplicati saying something like the disk was full… it’s very strange because the HDD where it stores the backups is 4tb and the docker folder is only max 8gb, well, however, to not give me bad vida I entered duplicati and deleted that task with the database and the backups and I deleted them, however when I saw the HDD it was fine, half as usual… it had a lot of space.

but the disk that is full to the point of exploding is the SSD disk of my 130gb OMV NAS server… which is even more strange because the debian-based OMV system does not reach 8gb, and with all the docker that I use them installed and running for more than a year, the maximum I get is 20GB of disk usage…

in the image the first 2 disks labeled as Roy.Local.C&D are from my daily use laptop, there is no ‘problem’ with them
the sda ​​equipment is the SSD where the OS OMV and the dockers are installed, which, as I already told lox, has arrived in 1 year that you 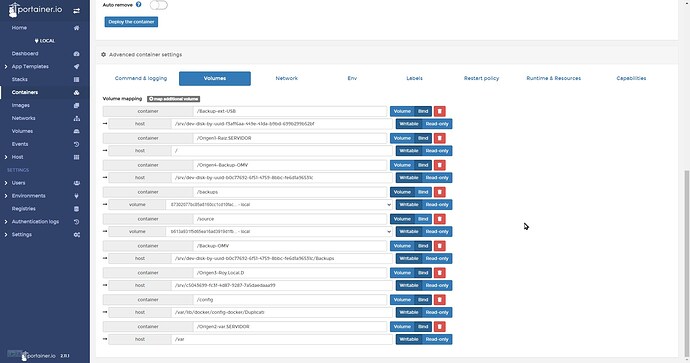 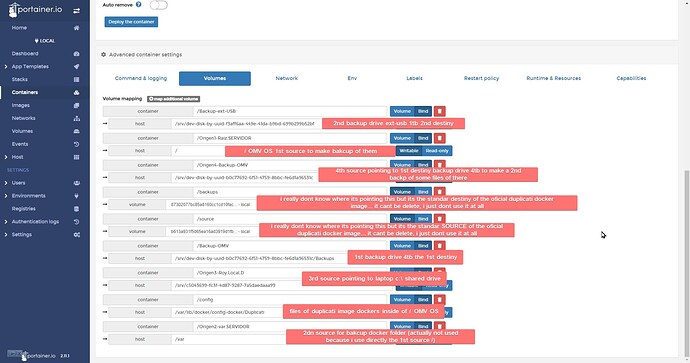 Hello, what Duplicati options have you customized? I am wondering if you changed the Remote Volume Size setting from 50MB to something (much?) larger. If it’s set really large, it will greatly increase the amount of temp space required while performing backups. If this temp area is being directed to your 130GB SSD, it might explain the problem.

hello, sorry I was on a trip but I’m ready again!

wel,l yes I changed the Remote Volume Size setting to 1gb since all my backups will be store localy from my sata 8tb disk in my OMV5 to a 4tb USB disk also connected to the OMV5, so I was thinking of doing it like this so I don’t have hundreds and hundreds of small .zip files and try to have just few files

Well, at a minimum Duplicati will generate three files for a single backup snapshot version: a dblock, a dindex, and a dlist. So it’s not possible to have a SINGLE file.

And I would definitely advise against using very large dblock files (remote volume size). 1GB still seems too large to me, but it might be “ok” as long as you are careful and understand the ramifications. Definitely don’t use 500GB.