How to resolve this error, appears when trying to backup a URL in users favorites?
The file is backed, can I supress error warnings?

Also, there are over 5000 errors, but I cannot see the full list.

Few questions: What version of Duplicati? What operating system? Is Duplicati running under a user context that has full permission to these files it’s trying to back up?

Using version 2.05.101, Windows Server 2008r2, has full permissions, no problems backing all the other files. I assume it is just a warning, haven’t checked to see if the files are backed or not…but there are 5000 of them. the log only shows a few. I would like to suppress the warning if possible. It is just a “favorites” link. .url file.

Are you saying it’s likely all 5000+ files are these URL shortcut files? This good info, I can try testing your situation to see if I can reproduce.

I have this problem as well:
Duplicati.Library.Main.Operation.Backup.MetadataGenerator.Metadata-MetadataProcessFailed]: Failed to process metadata for

– followed by –
Duplicati.Library.Main.Operation.Backup.FileBlockProcessor.FileEntry-PathProcessingFailed]: Failed to process path: --> Yes this second is a file not a path.<–
Each of the files that is reported in the log has both of the above messages.

When it appeared, I deleted the files (they were not important) and then a new set of 11 files with 22 warnings appeared.

I have this problem as well

Are they also URL files like the original poster?

No. The file type appears to be random. For instance, when it first occurred it was a few files that tracked changes to a Word project. When I deleted those files the same error shifted to .png’s and .jpg’s.

These errors come with detailed information – which the one-line log summaries don’t reveal.
There’s also a limit to the number of warnings shown. I think it’s 20, but you seem to have 22.
Possibly there are a lot more behind those. A possible guess is that it’s a permission problem.
Duplicati’s default install using the .msi file and GUI installer runs as that user, and so doesn’t automatically have access to another user’s files. Are files from the Duplicati user or another?

To get details, you could set up –log-file, but Viewing the Duplicati Server Logs is likely easier.
You can use another tab open to About --> Show log --> Live --> Warning, then do the backup.
If you get your usual error message, click on the line to see what it has to say about that issue.

Here’s an example of a permission problem: 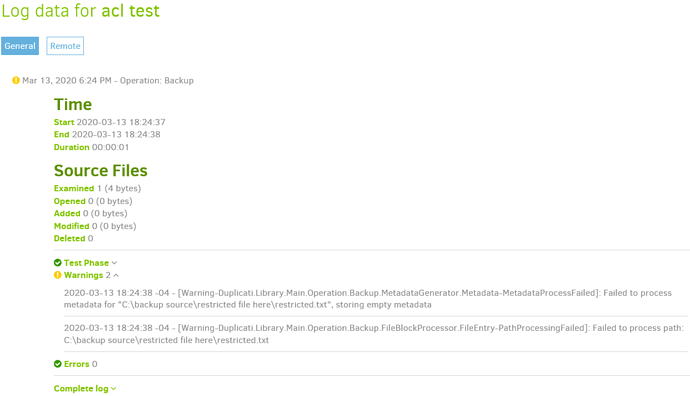 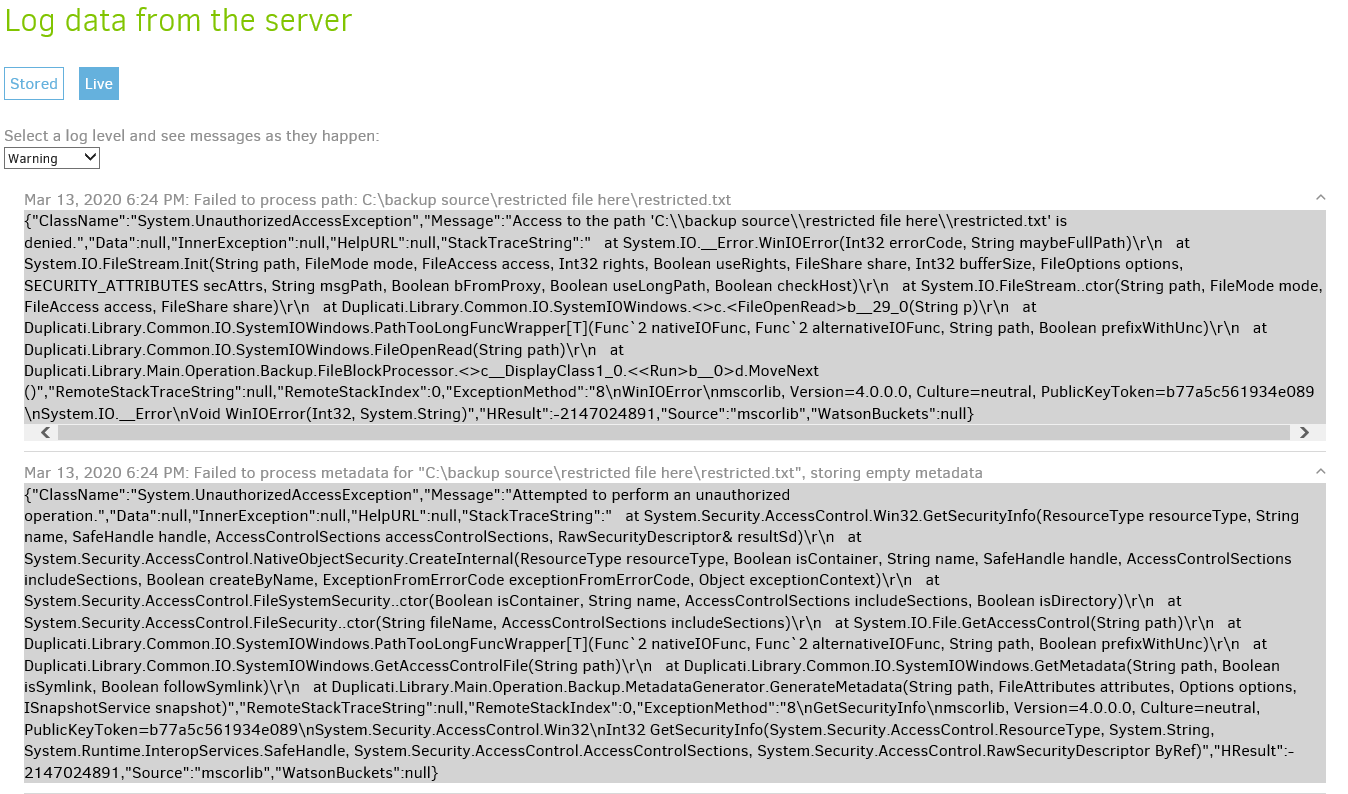