Error The base connection is closed (Webdav Yandex)

I often have a failed with message: Basic connection closed: The connection was unexpectedly closed.

All my work was stopped because of this error.
What should I do?

I don’t have a stable problem with the webdav connection itself.
Deplicaty broke down, I noticed that the latest versions do not work well 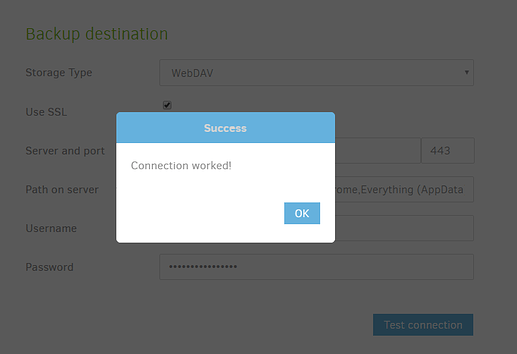 This won’t help you, but I use the latest Canary versions and some use WebDAV just fine. So I don’t think WebDAV is broken in recent canary versions.

Maybe it’s something with Yandex? Try searching the forum, there are lots of threads mentioning Yandex.

It looks like Yandex is closing the connection, Duplicati is exhausting retries (attempt 5 of 5 failed), and your upload (a modest-sized dblock) never gets uploaded. Do short files (e.g. dindex) upload OK? The “Test connection” button is (I believe) just a download of a directory listing. It’s not a transfer stress test. Duplicati.CommandLine.BackendTester.exe can do stress testing, but you could check job logs as well.

“RetryAttempts” in “BackendStatistics” should count all the retries for the Rename/Retry sequence you posted. You can also infer upload retries from job Show log --> Remote. If file with same size & hash is seen repeatedly being put, it’s likely a retry. You have to click on the put line to see that level of detail.

Retries are somewhat expected on the Internet, but too many cause trouble. You might also have local issues such as a router or modem of some sort that needs reboot. I have to do that to mine sometimes.

Network issues can also cause slow transfers, and an Internet speed test might show if your service is working as it should. If upload is slow, your ISP might have you perform additional troubleshooting of it.

I realized that using the WebDAV protocol to transfer data over the Internet is a bad idea. It is possible that WebDAV, if configured on the local network on the NAS server, is not a bad solution.

I decided to change WebDAV to Google Drive and the problem is solved. With various strange errors and slow download speeds

I have exactly the same problem with Yandex. I guess they just don’t like us using unofficial clients for backup. When I asked them why Duplicati stopped working over WebDav, they suggested using their Yandex.Disk instead.

I thought that they had a problem.Therefore, I bought a Google disk 100GB and lightning speed. Now backups are done for 1-2 minutes instead of 30-40 minutes on WebDav