Hi,
I store my backups on the server. I want to delete files and reconfigure them. I am getting the following error when I unconfigure the files without deleting them

I think you need to update your version of Duplicati: Duplicati

The error has been fixed, but if it is the same as this:

I think you need to update your version of Duplicati: Duplicati

The error has been fixed, but if it is the same as this:

thanks! but ı get this error
The database was attempted repaired, but the repair did not complete. This database may be incomplete and the backup process cannot continue. You may delete the local database and attempt to repair it again.

The database was attempted repaired, but the repair did not complete.

That is another problem.

To fix this, go to the “Database …”, then choose the “Recreate” option.

I tried but not. ı get this error
No files were found at the remote location, perhaps the target url is incorrect?

I edited your post to improve the formating. (Just added ~~~ before and after the output you pasted, see here for details).

This means that the file listing succeeded, but no files were returned.

Are you sure there are files in the remote folder? What storage provider are you using?

yes, sure there are files in the remote folder.
we are using server (on the network ) storage provider

Can you perhaps post a screenshot of the destination setup screen?

I think there is some issue with the path, so it looks in the wrong place. 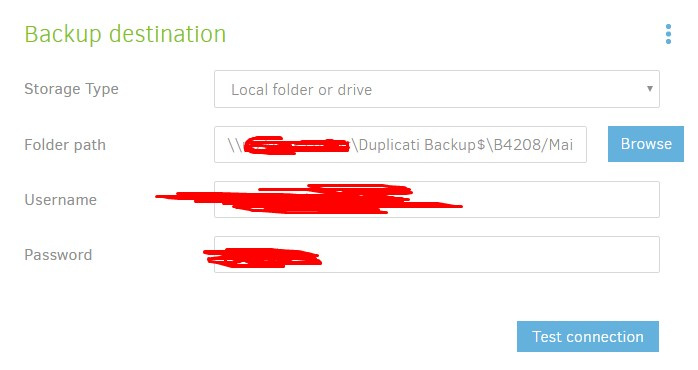 You did not answer? I sent the wrong screen?

There is one more problem.
This operation can not access the file because another operation has locked part of the file.
Destination and database are synchronized, not making any changes

You did not answer?

You have to understand that everyone here is doing this on their free time, so it can sometimes take a while before someone finds the time to respond.

Not sure what happens here, but the path appears to have a / in it, are you sure this is correct? AFAIK, Windows will map that to \.

Also, could it be that the user you are logging in with in Duplicati is getting another folder than what you see if you log in with your normal account?