So after every backup I’ve been getting these. I’m not very savvy about how all this works. Is this something I can fix or is it unavoidable? Will these affect my being able to restore my system drive in case of a catastrophic failure? If I’m getting these errors should I just forget about being able to restore anything at all therefore stop using Duplicati? It would be great to know ahead of time Thank You for your feedback in advance… 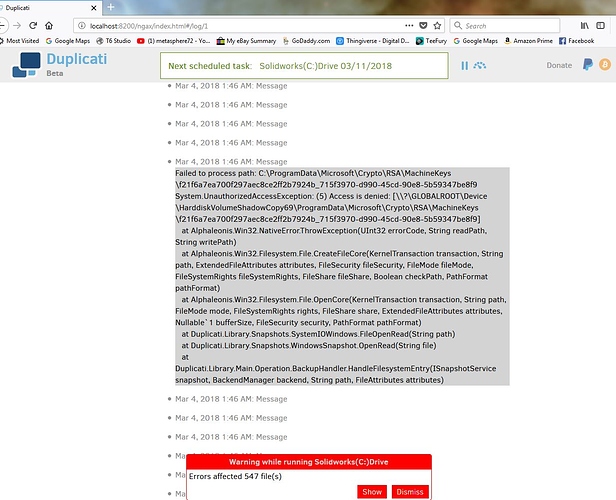 Hello @metasphere72, welcome to the forum!

The “Access is denied” errors indicate that Duplicati is trying to back up files that it doesn’t have access to.

My guess is you’re running it under your own user account and / or as the tray icon (not the service) so if you don’t have access to something, then neither with Duplicati.

If you don’t care about not backing up things that you / Duplicati don’t have access to then you don’t have to be worried. However if you DO want to back such things up then you’ll need to either give yourself access to them or run Duplicati under an account that does.

Will these affect my being able to restore my system drive in case of a catastrophic failure?

Yes - anything that Duplicati doesn’t have access to can’t be restored. However, it should be noted that Duplicati is not a “my hard disk died so I’m going to restore to a new one and boot back into the OS” tool - it is a “something deleted my tax and MP3 files so I need to restore them” tool. In other words, it does FILE level backups not DISK / SYSTEM level.

If you’re looking for a full system backup you might want to read through this thread where some other tools (such as Free Windows Backup for Endpoints, Servers, Desktops - Veeam Agent for Windows) have been mentioned:
How far is duplicati away from doing a “full” system drive image backup?

Thank You! That Answers my questions beautifully. Although I’m the only user/administrator I’m not sure why Duplicati hasn’t been able to access those files as there are no other accounts on this PC (at least non that I know of). Perhaps a permissions repair is in order or something like that. Do you think that would help?
I do, in fact, run Acronis True Image to create a disk image in the event I may need to revive my drive in the event it come crashing down some day. I may however research that a little more just to make sure I’m covered there. Again, Thanks! You have a great product here and I appreciate the explanation. and thanks for the Veeam agent link it looks good.

I couldn’t say for all the errors, but the one you expanded in your screen shot showed the permissions issue with a crypto file - so it’s possible that access is only allowed to the app that created it (for security reasons).