I have been researching this for several days and quite honestly my eyes are glazed over. I am looking for an easy way to deleter Old Backups without having to write any code. I have not written code since the early 80s when we had to write Fortran programs to run our Engineering problems in College.

If I have overlooked a thread explaining this, I apologize.

Duplicati version and System Info below.

Just to be clear, are you looking for help to install 2.0.3.3 beta so you can delete old backups? If so, try downloading the installer and just install over the current version - there were some changes to the internal updater that made it more stable moving forward but cause some issues updating to the new code.

It sounds like you’ve already got a version working - does the Delete feature not work in that (or are you dealing with destination folders that no longer have an associated job)?

My apologies for the confusion. I am looking for a way to Delete old backups. I have over 100 of them for each back up setting. I cannot find the Delete feature you referenced in your reply. The only “delete” I see is associated with configuration of backup settings. Where do I find the “delete” for removing from the harddrive all the older backups?

As for my Update comment. I had recently installed the update and clicked “activate now” several times. I did not realize it required a computer reboot to activate. I tried exiting out of my browser, but that did not work. When I posted my question, I thought there might have been some sort of glitch that impacted my ability to delete and activate.

Any chance you mean you want to delete old backup versions? If so, then you should check out the automated setting for that found in the configuration for each backup job. All you’d need to do is set that up, then run the backup job like normal, and it would take care of deleting the old versions for you. As a starter I suggest you start out with the “smart backup retention” setting.

I am not sure if “versions” is the current term. The items I want deleted or removed from my harddrive are the daily backups of my harddrive. They are named Duplicaiti.datetime.dlist.zip They are located on a second harddrive.

The only User Interface I have is a screen that opens at a web address. I have the Options of Home, Add Backup, Restore, Settings, About, Logout. In none fo these do I see a means to delete old backups/versions. Any help is appreciated.

I have the Options of Home, Add Backup, Restore, Settings, About, Logout.

This is the main UI. Are you saying you don’t have any actual backup jobs currently added?

I’m a little confused then as to where the backup files you want to delete originally came from. If they no longer correspond to a backup set, and you no longer need them, then I assume you can just manually delete them from your hard drive if you’re really sure. NOTE: to clarify, I mean you would only do this when you no longer need that backup set at all, i.e. the backup files are orphaned or something. If, on the other hand, they correspond to a backup set you intend to keep, don’t mess with them at all, as @drwtsn32 said.

Edit: would you be willing or able to include a screenshot of whatever you’re currently seeing on your Duplicati “Home” screen?

Do not manually mess with those Duplicati backup files. You cannot just delete things yourself. Files may look old, but due to deduplication they may be critical for restoring even yesterday’s backup.

What problem are you trying to accomplish? If you’re worried about the backups taking too much space because too many backups are being retained, you probably don’t need to worry. Because of Duplicati’s deduplication it is extremely efficient.

If you do want to prune/delete old backup versions, you do it on page “5” where you edit your backup job configuration. Check the “Retention” setting.

I have two physical HD. The first is partitioned (C, and D) with OS on C and Data on D. A second hard drive (E) is where the product of my “backups” are stored. I have two backup “sets” or processes. The first is a process that makes a backup of all files and folders on the D drive. It runs 5 times per week. The second is a process that makes a backup of all files and folders in my Pictures folder. It runs 2 times per week. I have nearly a year’s worth of backups for each process on the E drive. All the backup sets (or versions? term used in a previous reply) are taking up a significant amount of space on E drive. I read in one of these threads it is not a wise idea to start deleting the zip files. In another thread, there was advice on writing a “script” to remove older backups. If I knew which “backup” or zip files to save, I would delete the ones older than three months, but I am uncertain as to which should remain. 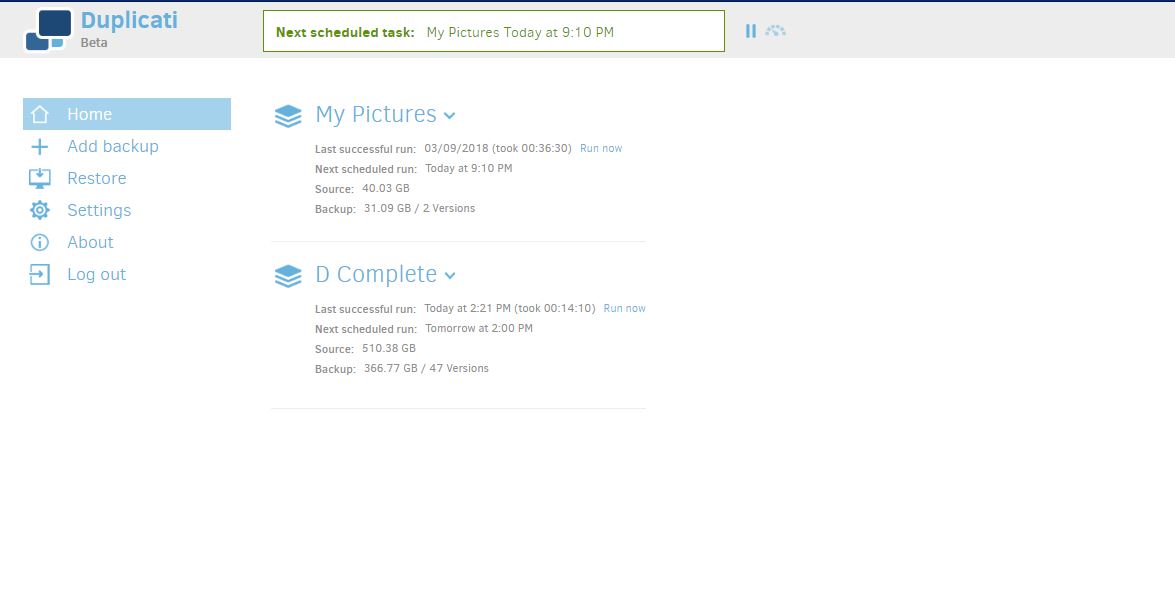 I was replying as your comment posted. Thanks. I knew not to start deleting at will.

I will look for the option on page 5 after dinner.

I’m really not trying to be pedantic, but terminology is important here. There’s a vast difference between “deleting old backups” (which seems to imply that you have junk backup files sitting around that you don’t even want to keep), and removing older versions.

You should notice from your screenshot of your duplicati GUI frontpage, that both backups are taking up quite a bit less space on the destination HDD than the actual source data - thanks in no small part to Duplicati’s deduplication capabilities.

The “My Pictures” backup, as you can see in the screenshot, only has 2 versions currently. My guess is that there is no wasted space here. Remember that Duplicat only stores changes to files, it does not store every file in the backup job in every version. That means that even when you have 47 past versions (as in the ‘D Complete’ backup set), your total backup data is still far smaller than the source data.

However most people don’t feel the need to store old versions forever - that’s why I personally suggest using “smart retention” as i mentioned earlier, on page 5 of configuration settings for a backup set.

Exactly what I noticed.

If I have overlooked a thread explaining this, I apologize.

No need to apologize, but at https://www.duplicati.com/, the page-top link to “Manual” is easier than threads. Maybe https://forum.duplicati.com/ could also link to that someday? There’s actually your exact wish shown:

This appears under “The retention can be set in 3 ways” in Creating a new backup job, but because yours exists, see Editing an existing backup. One recent addition which you just installed with 2.0.3.3 beta is that there are now 5 ways

which have summary help in the UI if you pick them. For (possibly way too much) detail, see the announcement at New retention policy deletes old backups in a smart way and decide if you prefer a simple age-based cleanup or something that thins out old backup versions more as they get older. Perhaps all is fine now from a space point of view and you can file this away for when space does get tight.

Getting back to versions though, I’m concerned that you think you have 100 My Pictures when your screen shot shows 2, with the last one at 03/09/2018 even though you have a scheduled job checking for updates. This might simply mean you don’t actually update anything, thus no new version is made, but please check. Somewhat odd is that a pure pictures backup shouldn’t be smaller than the source (no compression done), but maybe you have some other things there that are not subject to the –compression-extension-file policy.

The items I want deleted or removed from my harddrive are the daily backups of my harddrive. They are named Duplicaiti.datetime.dlist.zip

This isn’t a backup, but the part of the backup that’s a list of source files in that one. You also get dindex and dblock files as seen on your screenshot. These store the file contents and indexes about how to get to them.

Restoring files from a backup should show how many versions you have (should agree with the main screen) and also when they were made. Looking at the file view and maybe even trying a test restore would be good.

As for my Update comment. I had recently installed the update and clicked “activate now” several times. I did not realize it required a computer reboot to activate.

Especially if your Duplicati is a Windows Service (would have needed command line work at initial install time) you might have seen Activate downloaded upgrade sometimes fail which is currently getting some discussion.

That’s my attempt to further clarify what everyone is talking about (thanks!), and to suggest another concern.

This is a reply to all that have helped or made suggestions. I apologizie for the tardy response. I had an unscheduled stay of a few days at the local hospital. I just got home this morning. I will review all the responses and make the changes to the retention settings in few moments. I assume the next time it backups either of my backup plans, it will automatically delete any items older than 3 months.

After reviewing the othe comments, I will reply directly. I appreciate each of you for helping.

No worries on the delay, real life gets in everybody’s way from time to time - hope you are doing better now that you’re back!

My problems are solved. If you want to read further I will attempt to explain what happened and why I had a problem. If not, then thanks to all that have helped me on this.

After my discharge from hospital one of my techie friends stopped by to check on me. They do not use duplicati but found why I had nearly 65% of a 1 tb drive. Yes, my two current back up plans (My Photos and Cmplete) had 2 and 47 versions respectively. What my friend discovered and I had forgotten I had other back up plans when I first started using duplicati. I removed them but the files associated with them remained on my HD in the two different folders Backups and Backups1. These are back up plans accounted for the other 250 gb of space.

Again I appreciate everyone that helped.