I’m backing up to my unraid server over the gigabit lan and am seeing a constant speed of 8mbps. Even without cache I can write to the array at 40mbps. Why is it so slow? Is there anything I can change?

Welp, I guess it just sucks then, and can’t complete a simple backup.

seeing a constant speed of 8mbps

Seeing with what? Task Manager? Is this Windows, Linux, something else? What is drive performance? Typically the need to do the compression and encryption in temp folder will prevent getting to LAN speed.
Constant speed is a little unusual. Usually it’s a little bursty, but that might depend on protocol. Is it SMB?

Is there anything I can change?

What do the performance tools say is busy? The drive-is commonly a limit (still seems slow…) but needs measuring. On extremely slow systems (more often an underpowered NAS than a PC), the CPU can limit.

Thanks for your reply.

Seeing with what? Task Manager?

Seeing this with Duplicati’s interface.

Is this Windows, Linux, something else?

The machine to be backed up is Win 10. Backing up to Unraid.

What is drive performance?

On the local machine, at the worst case there’s some spinning rust @120MBps, best case several nvme with speeds up to 3000MBps. On the array write speed is 40MBps as I’m skipping the cache.

Constant speed is a little unusual. Usually it’s a little bursty, but that might depend on protocol. Is it SMB?

According to the Duplicati interface it’s very constant. Between 7.8 and 8MBps. Yes, protocall is SMB.

What do the performance tools say is busy? The drive-is commonly a limit (still seems slow…) but needs measuring. On extremely slow systems (more often an underpowered NAS than a PC), the CPU can limit.

Do you mean built in performance tools on the host and target machines? Neither of them are busy, and neither of them lack for recourses. CPU on the backup machine is R9 5900X, on Unraid it’s i5 4590. The config of Duplicati is completely default, except that encryption is turned off.

On the local machine, at the worst case there’s some spinning rust @120MBps, best case several nvme with speeds up to 3000MBps.

Mechanical drives are far better at sequential than random, and Duplicati performance that has some involved is probably somewhere in between. Below is the computer I’m on. Note the huge differences. 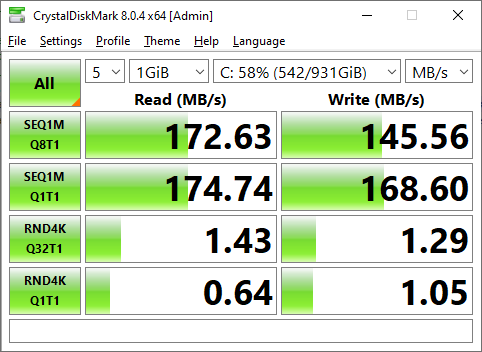 Do you mean built in performance tools on the host and target machines?

The target probably has an easier time (if it’s disk limited) because it’s sequential writes, and you have seemingly measured that already. The source system scans for changed source files by examining file timestamps, then changed files must be read to find the changed blocks, which then go into a .zip file created in the user’s Temp folder. Actions are recorded in a database typically in user profile. When file reaches configured remote volume size, it is encrypted and copied out. All this disk activity is in parallel.

See backup logs for statistics on what there is, and what was modified (which gets a file read-through):

Your database location is on the Database screen, but is probably in the user profile, as Temp might be. tempdir option can move the folder Duplicati uses for temporary files. For source, I guess it’s where it is however because this is Windows you can use usn-policy to use the NTFS journal to avoid full search. Doing so requires an Administrator account with elevation in effect (e.g. a UAC prompt). SYSTEM will of course work (and doesn’t prompt you), but typically needs setting up Duplicati as a service (extra steps).

If somehow Duplicati is bogged down on its SMB transfer (not my first guess), you can backup to a local folder to see how fast that goes. Is this the initial backup or a later one? Initial backup disk use is probably mostly affected by block processing and not by searching for changes because everything needs backup.

I’m picking on the drive because in my Task Manager I often see it fully utilized and below 8 mbits/second.

I’m not sure of the exact algorithm that produces status bar speed. Bursty speed should be visible in Task Manager on a network interface (assuming it’s not drowned out by other network activities). One can also see transfer speed very clearly in logs at Profiling level. This run is upload speed limited. Yours likely isn’t.

Profiling logs are huge. For just speeds, you can use log-file with log-file-log-filter and not log-file-log-level.
Getting a rougher idea of upload speeds can be done at Information or Retry level, even in About → Show log → Live. It will be a little confusing because there are parallel uploads to try to more fully fill the network.

If you cut that to 1 it should start looking sequential, with a dblock going out (default 50 MB) then its dindex.
There is a race between production of volumes to upload, and upload rate, If you want to view your Temp folder you can see things either backing up there (if production is faster than upload) or looking a bit empty.

Thanks for the detailed reply, I appreciate the time you put in.

That being said, I’m not going to pull my hair out over it. Several other backup utilities can write to the array at full speed, duplicati is the odd man out, so I’ll just use one of them instead.

It seems it’s for something other that what I was trying to use it for.

Obviously use whatever works for you, but note that the heavy processing does give benefit of storing only changed data in any given backup. It’s not by any means a file copy, so be careful what you compare with.

High CPU usage while backing up #2563 is an issue that just got more posts. One user went to restic to solve a CPU load issue (and I think its GUI is lacking, but that does do the upload-only-changed-data plan).

Big Comparison - Borg vs Restic vs Arq 5 vs Duplicacy vs Duplicati is one of several forum comparisons, and one where Duplicati seemed to be pretty fast. Yours is unusually slow, and the bottleneck is not clear.

It seems it’s for something other that what I was trying to use it for.

Specifics are still vague, but if you have some other satisfactory solutions all set, there’s no need to push.

Well, I’m certainly not comparing to a file copy. As far as I’m aware, block level, incremental backups are table stakes for a modern backup solution.

For completeness, my processor sits idle through all of this.

I have the same issue here, very slow backup speed to my nas on gigabit lan, using samba.
Coping files to the backup directory manually happens with normal speed. But during backup I got 1.5MB/s max.

iotop on linux gives me this

I know this is some kind of ext4 journaling event, but it makes no sense, hence the 1.5MB/s speed. The storage drives are 2x Toshiba P300 with a single md raid1 lvm volume. The duplicati 2 host machine is Windows 11, but I got the same problem with Windows 10.

On both Linux and Windows I have/had normal speed LAN speed so it shouldn’t be the OS.

By default, the code searches and checks the files, puts them into container files of max size, and while continuing on that it uploads them as it maxes out each container file. eg a 50MB container file should upload faster than 1.5MB/s.

If you watch the backup files on the remote drive as the backup is running, you might see something else happening than you are expecting. I’m not sure.

Could also be samba related or something there I suppose since manual copy may include different code than the application uses.

If it is Duplicati and also not user error, the closest I’ve seen is only for a false speed rundown from a code loop issue which ends with a frozen UI.

So this needs to be narrowed down further.

Another thing, you could try using ssh instead if the NAS allows it. It would be less security risky than the local machine having direct access to the backup files as a shared drive via samba sharing as well. ssh can be used with Windows as well.

I’m curious to know if adding and enabling the advanced option, “use-block-cache” changes the results at all?

The duplicati 2 host machine is Windows 11, but I got the same problem with Windows 10.

I’m curious to know what Task Manager and Resource Monitor say is going on with disk and CPU.
Disk is probably less of a worry if drive is an SSD, but preparing backup files is very I/O-intensive.
@Xavron described. You can look in your %TEMP% folder to watch default 50 MB files going by.
If there is no queue of big dup-* files, it’s a production limit (@JimboJones idea might change it).
If there are several in the queue (configurable by asynchronous-upload-limit) it’s limited by upload.

I’m assuming that the iotop is from the NAS, but please mention if there’s Duplicati-on-Linux too.

If you want to test some Duplicati code (although not the backup code), you can copy files somewhere (preferably not to the backup destination – use a different folder) starting with Export As Command-line. Edit the Target URL and use it with Duplicati.CommandLine.BackendTool.exe to manually time file put.

Duplicati times all of its backup file put operations, but you need a Profiling log or log-file-filter to look at:

(example from my remote backup where speed is limited by upload link – I wonder what your limiter is?)