Hi,
I have duplicati on a server 2012 box and when I start it to configure I get lots of warning messages in the middle of the screen regarding a deleted backup. Pressing the dismiss button won’t remove them and if I click ‘show’ I get the message that the backup may have been deleted (It Has)
Is there anyway to remove these messages? They render the software useless as I cant now setup a new backup as the red warning boxes are stacked up on the screen covering the info behind!
This behavious happens on firefox, chrome and IE11.

I’m having trouble picturing what you are describing, can you provide a screenshot of what your are describing or some of the actual warning message text?

(For a screen shot you can just paste the image directly into your post, there’s no “upload picture” feature needed.)

Hey guys, I know this is a really old post, but I’m facing the same symptom and wanted to provide a screenshot as you (JonMikeIV) had requested. First, here’s what leads to the symptom…

Aside from multiple attempts on the buttons and also giving up upwards to 30 minutes, I also did an over-install with 2.0.5.1_beta_2020-01-18-x64. I also hunted around the CLI options to see if there was any way to clear all the warnings that way but found nothing. 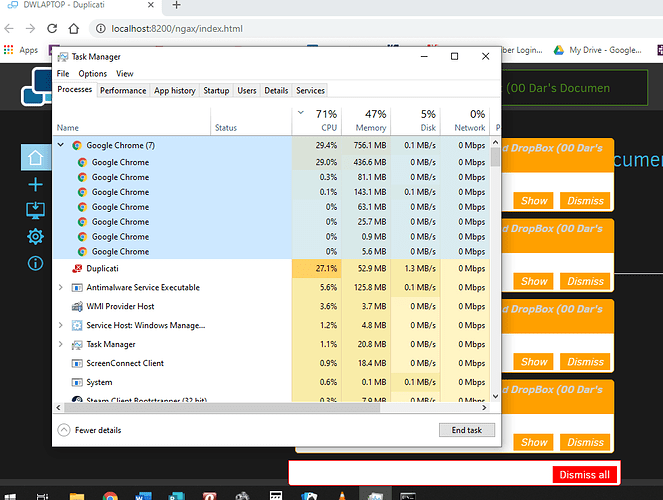 I have the same problem, almost a year later. On Linux (Arch).