I have Duplicati 2.0.5.1 installed on several computers with Win 10 (v 2004 19041.508). Computers have defined backup tasks. OpenVPN (https://openvpn.net) is also installed on three computers (desktop and 2 laptops). Scheduled daily backups are performed correctly, but only partially performed on these three computers, i.e. proper backup and verification. After this stage, an e-mail should be sent with information about the performed backup - it is not sent and the task that should be completed does not end. The job stops. In the header it says that the backup is complete, but in fact not finished. Consequently, the next copy on the following day is no longer performed and the entire Duplicati is stopped on this task. After restarting the machine, the situation is unchanged. Only the manual ending of the task (deletion) and the restart makes it possible to perform the next task according to the schedule, which ends exactly like the previous one. I also created a task without sending an email, the effect is the same. After uninstalling OpenVPN - Duplicati works fine. My impression is that the OpenVPN installed has some influence on the performance of tasks in Duplicati. Installing OpenVPN 64 bit in versions 2.4.8, 2.4.9, 2.5 beta and 3.2.1. The effect is the same in all OVPN versions. Is there a solution to the above problem?

In the header it says that the backup is complete, but in fact not finished.

Can you elaborate? What exactly does the main Duplicati progress bar say? A screen shot may be helpful.

How have you configured OpenVPN? Does it direct all internet-bound traffic through the VPN tunnel, or just some destinations? What is your backup destination?

After the completion of the bakcup task and verification, the word “Backup complete” (green bar) appears on the progress bar. After pressing the button with the “cross” and confirming that the task is to stop, the message “Error!” Appears after some time. When you press the cross again, the progress bar shows “Stopping after the current file: Backup” and the cross button is still available. Screenshot in attachment.

OpenVPN is well configured, but not enabled during backup. OVPN is only used for remote work at home, and a copy is created while the computer is in office… The VPN tunnel is closed and unnecessary.
The copy destination is an SFTP server. 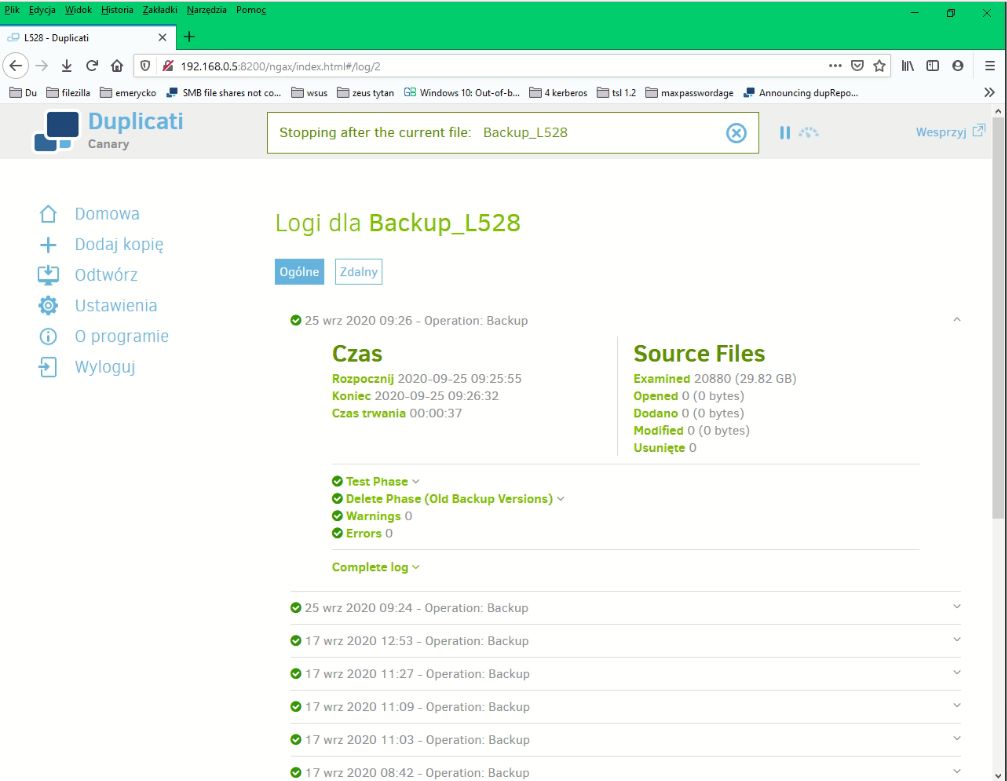 Ok thanks for the info. Is the SFTP destination on the local network or is it remote?

Can you open a browser tab to Duplicati web UI -> About -> Show Log -> Live, and set the dropdown to “Verbose”. Leave this tab visible - don’t close it.

Open another tab and start the Duplicati backup job. When it appears to hang at the end of the job completion, go back to the Live Log tab. Do you see any updates regularly there? Or does it stop for a long time (20+ minutes) with no further updates? Copy/paste the most recent entries here.

The SFTP destination is on a different network segment (different subnet) in the same company (behind the router).
The backup job stops permanently as in the attachment (Polish version). Restarting the computer does not change anything. The task must be interrupted, restart of the computer done and only then I can start the above-mentioned task again. After reboot, the status is unchanged. Log (Verbose) attached. 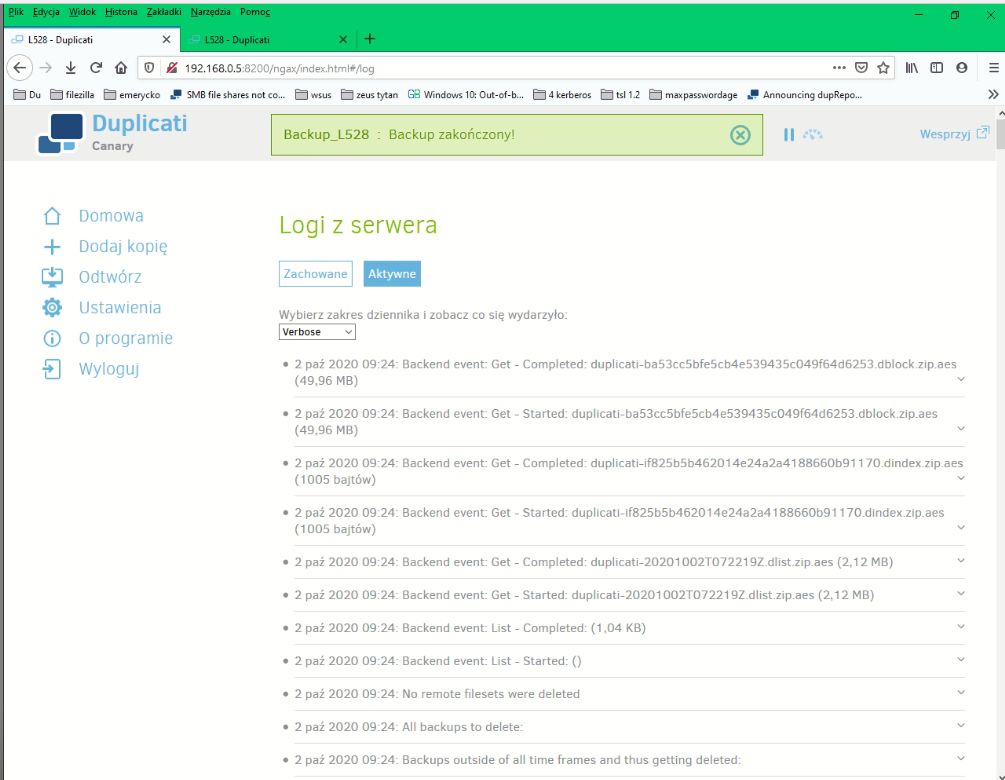 I see the backup completed and then it downloads a dlist, dindex, and dblock (for verification testing) but then nothing happened. Strange, don’t think I’ve seen that before.

Can we test this theory by temporarily disabling this verification? Set –backup-test-samples = 0

I don’t know why OpenVPN has anything to do with this test.

This is weird. When it’s installed, is it running or having any network effects that you know of?

How’s your networking skill? One thing that Duplicati seemingly does after backup is report to
https://usage-reporter.duplicati.com. It’s configurable in Settings, but I haven’t tested changes.

Of course, first thing to make sure is you have no reporting options or scripting options stuck.
I know you took a step down that already. These things happen after the backup itself is done.

Sometimes About --> Show log --> Live --> Profiling can give some hint on how far things ran.
For less noise, you can set up a very tiny very simple backup and see if you can get the hang.
For testing mail sending by itself (without running the backup), there’s a send-mail command.

I don’t know why OpenVPN has anything to do with this test.

I don’t either unless it has a networking effect we can discover, but I’m not an OpenVPN expert.

I suppose another test, if a super-simple backup hangs, is to try with Export As Command-line.
If the process needs killing, do that in Task Manager so that both the parent and child are killed.
Going to local folder would also be less network use, though it “seemed” that backup itself ran.

Can we test this theory by temporarily disabling this verification? Set –backup-test-samples = 0

Other ways to see if there is a problem here include the “Test connection” button on the Destination screen, any log data that the SFTP server keeps, netstat to watch port :22, or… Wireshark analysis.