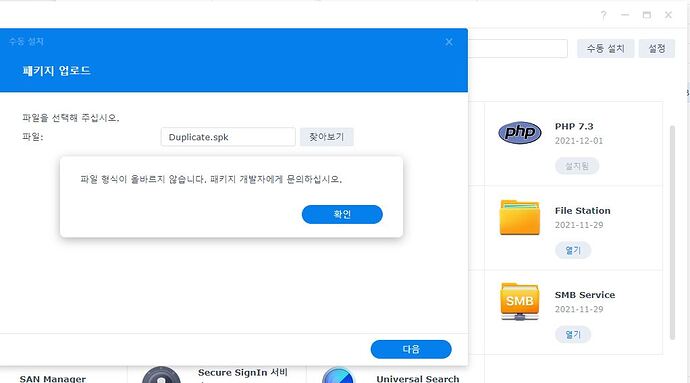 If you manually add the ASK format file in Synology NAS DSM 7.0, an error like the picture occurs
Error : The file format is incorrect. Contact the package developer. message appears

please check thank you in advance

This is a known issue: installation fails on DSM 7 · Issue #4547 · duplicati/duplicati · GitHub

No idea if/when it will be fixed.

One alternative is to use Duplicati inside Docker. If you have never used docker before there is a bit of a learning curve, but in my opinion it’s worth it. (I switched to using the Docker version of duplicati long before I upgraded to DSM 7.) Not all Synology NASes support Docker though.

Is Duplicate not supported in DMS 7.0?

When are you planning to apply?

Correct, it does not currently work on DSM 7. I’m not sure when this will be fixed. I’m just a volunteer on the forum and not a core developer.

If your NAS supports Docker I suggest you look at migrating to that, per my earlier message.

Just a minor note of clarification on this: it won’t install, but if you had Duplicati installed before the “upgrade” to DSM 7 then the service still works if started manually (you might have to go through the whole TrustFailure bad X3 cert rigmarole again though). Since it has never worked by automatic start for me anyway, I have just manually restarted it. Consequently, if you’re only running the beta then you may well have no problems until the next beta comes out (since DSM 7 won’t even recognise the 2.0.6.3 installer file now).

Manual start is detailed elsewhere, but the key things are giving it a good big temp folder to work with, and making sure that your server data folder isn’t anywhere that’ll get wiped by a DSM upgrade; basically, put both into a volume you control rather than on the DSM root: