Can one 'manually' delete a backup set? SOLVED

I’m just wondering if it’s possible to delete a backup set from within the web interface (or elsewhere). As an example, i have three backup sets and the first is some 800mb while the other 2 are only a few mb. The reason is i changed the source location to be backed up. Can i delete the first (800mb) backup set and keep the remaining two? A third backup set would be created (if necessary) on the next run.

I’m just wondering if it’s possible to delete a backup set from within the web interface (or elsewhere).

When you say “backup set” do you mean a specific dated backup like you’d see listed in the “Restore Files” interface or do you mean an entire backup job like you’d create when you click “Add backup”?

For that I think you want the Delete command with the --version-#parameter.

So if you wanted to delete all the “file versions” in backup version #3 you could run something like:

Or you should be able to use the GUI “Commandline…” option something like this: 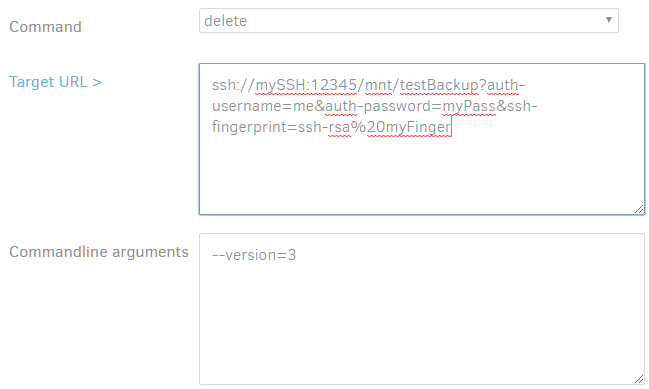 Edit: Not matter what method you choose to use, I’d suggest either trying it on a test backup and/or using the --dry-run parameter to make sure you’ve got all the parameters set right.

Thanks, i haven’t been able to get it to work. Mine is running on a test VM, with my test backups stored on the desktop. I suspect a noob pebcak error.

Here’s what i’ve attempted via the CommandLine GUI:

It seems to run forever, with “Running commandline entry” text, and i eventually abort (there’s no activity suggesting files are being deleted - the backup folder is not getting smaller).

When i abort, i get this:

The error message you included was due to aborting the process, so it doesn’t provide any insight into what might (or might not) have been going on.

Firstly, I’d suggest trying the delete again but including the --no-auto-compact=true parameter. This turns off a bunch of behind the scenes cleanup steps that you can read more about below (if you care).

Secondly, I’d suggest that you try running the delete again and then opening a 2nd browser window to the Duplicati GUI (likely something like http://localhost:8200/ngax/index.html#/log) so you can check the “Live” log in “Information” or “Profiling” mode. This should let you know about each specific step Duplicati is taking, even if it doesn’t result in a GUI progress update.

Read on if you care about the guts going on behind the scenes that might actually be making the delete take so long.

What goes on behind the scenes

Keep in mind that Duplicati doesn’t store raw files that can just be deleted - it chops files up into smaller blocks (of size --blocksize, default 100K) and stores the blocks (if not already in a backup) in an archive file (of size --dblock-size, default 50MB) OR stores a reference to an existing same-content block (if found in an existing backup).

All these block references are stored in the local .sqlite database file, so at it’s basic level a delete is really just going through the database, finding all the block references for a particular backup version (in this case #3) and flagging them as “deleted”.

What happens next varies depending on other setting in your config, but typically if a dblock (archive) file is found to have at least X% (`–threshold, default 25%) of the blocks stored in it flagged as deleted then the archive file is downloaded, uncompressed, “deleted” flagged blocks deleted, then the remaining content re-compressed, and the resulting file uploaded.

After that, if dblock (archive) files are found to be smaller that size X (--small-file-size, default 20% of dblock-size) they are downloaded, uncompressed, merged, re-compressed into fewer ‘more fully utilized’ files, and then uploaded.

So there are a number of areas that could have caused apparent stalling in the code:

It seems to run forever, with “Running commandline entry” text, and i eventually abort

Maybe there is a glitch that activates the password module? Try adding --passphrase=<passphrase> on a line by itself. You also need to supply the --dbpath parameter.

In previous attempts, i believe i deleted all advanced options - which include things like the passphrase, database location and whatnot.

This time i ran it keeping all those in place and left the original target URL (i also tried appending the ?username/password which didn’t help - same output):
Target URL: file:///home/kubuntu/Desktop/Backups
Arguments: --version=3

Plus all the pre-existing advanced settings which include the database name etc.

This quickly finished with:

Is it expecting a remote path and is doing something with the URL? For testing convenience, i’m doing this all on a single-machine VM which would not be a typical use-case as obviously we wouldn’t be storing our backups on our desktop

No filesets matched the criteria

This indicates that there is no “version 3” of the data?

What if you run the `LIST`` command? It should show you the versions.

This indicates that there is no “version 3” of the data?

It worked after i used --version=2.

Sorry guys, and thank you

There’s multiple posts that solved the ‘problem’ so not sure which i should say did so, so i’ll update this one with the parameters i used and say this one.