Can I delete these files?

In my temp folder, which I have mapped to my cache, I have a ton of files that start with “dup-” and then are followed by a random string of letters and numbers. I think these are what are uploaded when I am backing up, and there is a backlog of them from the multiple times that duplicati has hung on an upload and needed to be restarted. Is it ok to delete these? I don’t want to mess up my actual backups.

There is also one .sqlite file, and five .json files. I have 5 seperate backup templates, so I am guessing the .json files are for those. And the sqlite is the database? So I guess those should be left alone? But the other files are rather sizeable. Do I need to keep them?

I’m surprised that sqlite files in are your temp folder. Can you double check your backup job configurations to confirm where the databases really are? Click on a backup job name, then click the ‘Database…’ hyperlink, and check the ‘Local database path’ field. Does it show your temp folder there?

All 5 are mapped to /config
Forgot to mention, this is a docker running on unraid.

Have you ever used the “restore -> direct restore from backup files” option? That creates a temporary database, but it should clean up afterwards. If you have used that option, perhaps the timestamps of those temp sqlite files correspond to when you used it.

I have never done an actual restore, not a full one anyways. After an upload finished, I have run a restore in that specific backup profile for individual files to make sure they would work. But I don’t know the exact date. And the date on the file is almost a year ago. Don’t think I ran any then. Again, there is just the one sqlite file. There are 5 .json files. and then there are 65 files with no extension. There is also an empty folder labeled HttpServer. 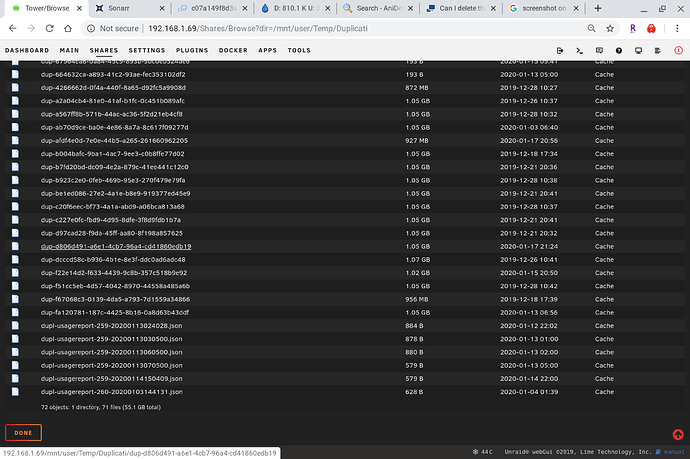 The “backup*.sqlite” files you can delete. Those are created during some version upgrades, and unless you hit a problem and want to roll back pretty quickly, they can be removed.

All of those “dup-*” files are created during the backup process but they really shouldn’t be building up like that. What version are you using?

We just released a new beta, I hope that one leaves much less left-over cruft in the temp folder.

So, I assume that means I can delete the “dup-” files also right? And I should leave only the .json files?

If Duplicati has no active job running, I think you can delete all the dup- files and even the json files.